My time in Chicago was spent (what else?) eating and checking out the various cool and interesting restaurants of the city. And what is a visit to Chicago without a taste of their ubiquitous hot dogs?

Initially, I was going to check out Hot Doug's again but as I pulled up to the restaurant around 2:30pm on Saturday, I spotted the line snaking around the building, and down the block, and decided to pass. Pressing onward but hungry, I ended up spotting a Mexican grocery store with a taqueria, cut off another driver and jammed into the parking lot. Inside, I loaded up on beverages, conchas and cookies and partook of a cecina taco and a chorizo taco with freshly squeezed orange juice.

To be honest, my Spanish comprehension is terrible. Everyone speaks natively (read: fast) and I'm at a disadvantage. Of course, this is compounded by the fact that I don't look terribly gringo so they speak to me normaly (fast and in Spanish). With a little mumbling and slight slurring, I manage to order the two tacos and the orange juice chico (small).

That's when the guy throws me a curve ball. Luckily, I hear the word "aqui" in the mix and guess that he's asking me if I want to eat it here (aqui) or "to go." Quickly, I drill out (with a heavy slurring of the words): "Si, aqui por favor" and hope that's enough to get me through. Luckily, it is and I'm treated to two very large and tasty tacos.

Compared to Baltimore, there's a very large population of Mexicans and Latinos in Chicago. This means that I'm sure to find some authentic and tasty eats here. In fact, I read reports that made the bold claim that the vendors at the New Maxwell Street Market are as good as in Mexico City. Woah, that's a bold claim indeed. Whatever the case, this grocery store taqueria has it going on. 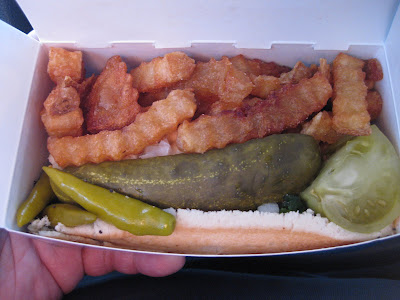 The Superdawg resting on a bed of fries.

Over at the PolyScience booth at the NRA Show, Jason is telling me that I need to check out SuperDawg up in Niles. Since I'm staying way north of the city in the suburban enclave of Deerfield/Northwood, it's on the way and after an afternoon of touring the show, I'm feeling in the mood for an authentic Chicago dog.

SuperDawg is a real, bona-fide drive-in. The kind you either saw in Happy Days or American Grafitti. You pull up to one of the stalls, peruse the menu, hit the button, order your food and a female car hop delivers it to you on a tray that you hang off your car window. This is my one chance at a Chicago dawg and I go whole hawg: the eponymously named Superdawg is an all-beef hot dog on a poppy seed bun with tomatoes, pickles, onions, celery salt, neon green relish and some tasty goodness resting on a bed of crispy crinkle-cut french fries. Muy excelente!

Fearing that perhaps the bed of fries might be a bit small, I decide to err on the side of abundance (this is America, afterall) and order a side of fries. A mistake. A tasty mistake perhaps, but a mistake nonetheless. Not because they weren't an example of crispy fried potato goodness, but rather because I was now facing a mountain of fries. Glory be to the Father, and to the Son...

No visit to the drive-in would be complete with a proper malted. Chalk one up for the chocolate malt and a side of Coke. Yes, it's a lot, but I've got a long drive, I reason. 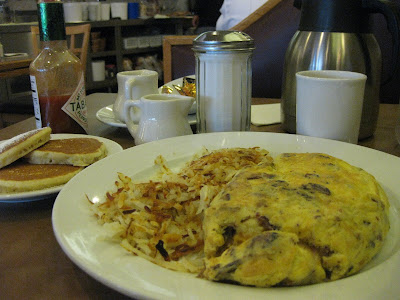 Bacon and Cheese Omelette with hash browns and pancakes at Georgie V's.

Sunday mornings are usually spent casually lolly gagging around the house. But since I'm on the road and on a schedule, I've got to get cracking and want to find a nice spot for brunch without having to battle the brunch crowd. This demands that one get going early while everyone else is either thinking about rousting themselves from bed or attending church services. Luckily, I attend the Church of Bacon and after a quick online search, I find a place nearby in Northwood called Georgie V's.

Georgie V's looks like your typical suburban pancake house. Simple walls, simple decor, nothing too fancy, just a light touch of classic Americana home with cream walls and lots of booths. I secure myself one and peruse the menu.

This is the area of Chicago that was home to some of America's most prominent teenagers. I'm comforted by the fact that not too far from here Mr. Vernon detained a bunch of unruly high schoolers in The Breakfast Club and Ferris took Cameron's dad's Ferrari for a ride in Ferris Bueller's Day Off.

Readers of this blog might be expecting some sort of fancy feast for brunch, but really, I prefer something a bit more simple and homey - even a bit downright pedestrian. I go with the three egg omelette with bacon and American cheese. Served with a side of hash browns and three dollar-sized pancakes, it's a simple winner. Whipped eggs, bacon and American cheese - slathered with Tabasco and a watered down piss water coffee. Ah, Americana. 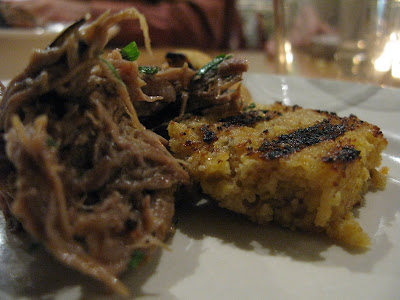 After a stint at Woodberry Kitchen, Thunder Dan Silo has taken up residence in the kitchen of Lula Cafe in Logan Square and is my inside guide to some of the newer places in town. Knowing my fondness for locally sourced ingredients, he's made reservations for us to attend the Stewards of the Land Family Dinner at mado restaurant in the now trendy Wicker Park/Bucktown neighborhood.

Once a month, chef owners Rob and Allie Levitt shut down their cozy restaurant to host the family dinners featuring products from certain producers. Tonight's guests are Marty and Kris Travis of Spence Farm - the oldest family farm in Livingston County, Illinois, established in 1830. At the outset, Rob tells us that 98% of the ingredients for the meal have come from Spence Farm and that the Iriquois White Corn used to make the cornbread is a very special heirloom corn that almost met total extinction just a couple of years ago and is now being cultivated (after an exhaustive search) by Marty and Kris. 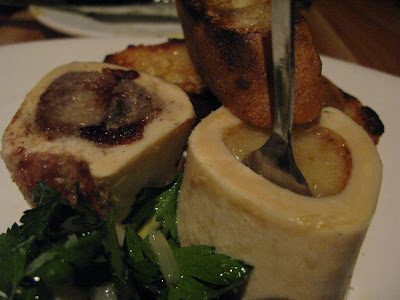 The next night, Thunder Dan and I are off to the place Dan's been wanting to check out: The Bristol. A neighborhood eatery, The Bristol seems to have subscribed to what is starting to look like the Farm-To-Table restaurants' de rigueur interior decor uniform: exposed brick walls, wood tables, metal chairs, noisy environment and hip-looking servers.

Uniform interior or not, The Bristol is jamming on a Monday night and is packed. After a half-hour wait, we are seated at a two top by the blackboard wall filled with handwritten chalk specials. The nice thing is that there's lots of goodness to choose from and we're not afraid for a de facto tasting menu:

It's a pretty darn good meal that started off with a seriously tasty cocktail or locally produced vodka, house made ginger beer and lime juice, in a copper cup. So darn good, I could've pounded them all night. 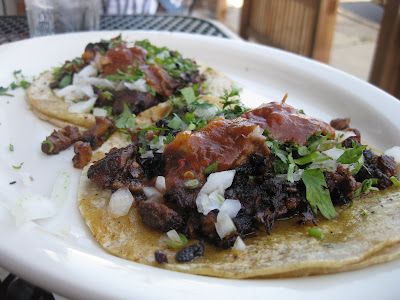 After such nice meals in the Windy City, it was time to gear down a bit on my last day and check out this al pastor place that Jason had been telling me. Happily, Tecalitlan has outdoor seats but no al pastor grill for a proper pastor. Instead, the meat is chopped, grilled and served on corn tortillas. The tortillas are good, the meat is tasty but this ain't no El Vipsito.

On the menu, I spot chilaquiles and I can't help myself. I must order one, just to taste. It's decent enough. The chips are slathered in a red salsa that has just a hint of chipotle bite but the rice and beans are just odd. 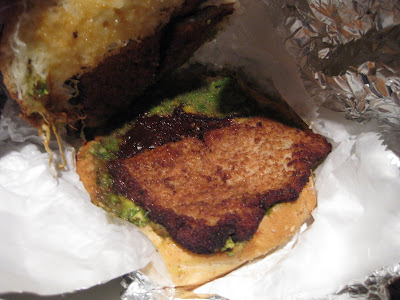 Inside the Cemitas Milanesa from Cemitas Puebla.

When asking for recommendations, Moveable Feast's Louisa Chu vociferously recommended a shop way west of the city. Cemitas Puebla is a small Mexican joint specializing in Pueblan fare. The neighborhood seems suitably sketchy but it's clean inside and food cooking on the griddle just looks delicious.

Here at Cemitas Puebla, the torta-like sandwiches are served on a sesame seed roll. I go for the milanesa, a pounded, breaded and fried pork cutlet, and a Taco Arabes. The owner is a friendly and very outgoing man who speaks in a happy Spanish. I apologize for my American ignorance and inability to speak more than one language and he doesn't skip a beat. Obviously, he's more than used to non-Spanish speaking people coming into his restaurant.

It's only been fifteen minutes since my meal at Tecalitlan, so it would be pure insanity for me to eat a second meal here. I ask for the food to-go and take it with me for the flight home.

Cocooned in darkness, with the lights of the world passing beneath me at 450 mph, the still slightly warm taco and cemitas goes down well with a cold Coke. Both are tasty. Perhaps not the best torta and taco I've ever had (could use a little salt), but the flavor is comforting and reassuing - and I'm confident that should United 766 take a nosedive into the ground, I would vaporize a happy, Mexican-fed, man.