Fruit Of The Sea 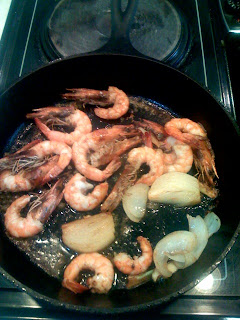 The shrimp fresh out of the broiler.

The other night I was lucky enough to score a bag of farmed shrimp through Spike from Two Oceans Seafood. It's been sitting in the fridge for the past two days and really needed to be used. Something simple, something quick, but there's no time to create a shopping list, just see what we've got here at the house.

A couple of sweet onions, some capers, a lime, few cloves of garlic and a tub of Trickling Springs butter and we're off to the races. Set the oven to broil and tossed the cast iron skillet in to heat up while the prep began.

I really enjoyed the peeled shrimp at Woodberry the other night so I set off to shell (with the heads remaining) the entire lot. It's painstaking and rather frustrating work. Pull too hard on the whiskers and the head cap comes off. Pull the shell at the wrong angle and the entire head is severed. Short of using my paring knife, I was never able to remove the shell entirely without losing the fins in the process. Those guys at Woodberry are just so much better than me.

After about fifteen or so shrimp, that was enough, I gave up. The rest will just have to be with the shells on. By this point, the pan is nice and hot, pull it out of the oven, set it on the stove (no heat), toss in some butter (sizzle, sizzle), the onions, the garlic, the capers, toss in the shrimp, squeeze some lime juice on top, stir, salt and back into the blazing oven.

A few moments later, give the shrimp another stir to mix and expose all sides to the flaming heat and then it's done. Just get them orange and don't go any further. Too long and they get hard and chewy.

Heated some rice in the microwave and that was today's breakfast. Not a bad way to start the day. Repeat the process for the remaining shrimp and save a few to make sinigang later. 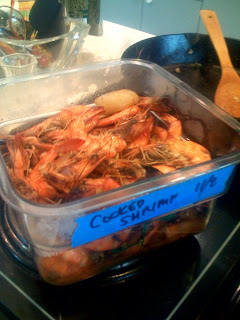 More shrimp fresh out of the broiler and ready for the fridge.