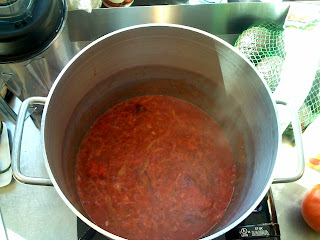 The salsa rojo for the chilaquiles simmers away.

It's a long day for me here at The Spro. Open to close. And I'm feeling a bit hungry. Good thing I started my prep for today yesterday.

In Tokyo, Ana told me that her favorite food is enchiladas, usually in salsa verde. That's pretty good stuff but what really turned me on in Mexico City were the chilaquiles. As I wrote in El Bajio, I had discovered chilaquiles with the perfect balance of soft and crisp - and I was now on a mission to recreate that for breakfast.

Casually following a recipe from Rick Bayless' Mexico, One Plate at a Time I simmered chopped onions, garlic and tomatoes from my garden in a large pot with cilantro, salt, roasted jalapenos, and some canned chipotle en adobo for about fifteen minutes. Once the salsa was ready, kill the heat, drop in some crispy corn tortilla chips - the proper, thick kind you make or source from the local tortilleria and not the thin, cheesy commercial kind like Tostitos. Stir the chips and salsa together until all the chips have been coated, cover and let sit for five minutes. 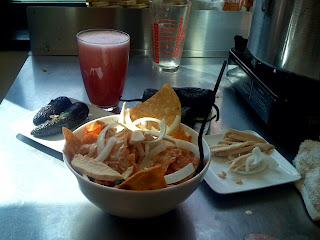 Perhaps through divine inspiration or merely hunger, just as I was getting the salsa to a simmer, Spike calls to see how the chilaquiles turned out. Upon learning that it was cooking, he would be "right over."

Spike arrived just as I was plating the chilaquiles.

Toss the chilaquiles in a bowl or on a plate, top with some crema, sliced onion, grated queso anejo and you're ready to rock. Add a little frijoles refritos on the side, some shredded chicken and a fried egg on top and it will be divine.

Of course, I didn't bring along a skillet so the fried egg and frijoles were out, but I did have some chicken left from last nights' stock making.

It was my first time making chilaquiles and I admit that I was a bit overzealous with the chips and added a bit more than I should have - making the dish a bit more crunchy than I would have preferred. Otherwise, I thought it turned out pretty darned good. The flavor of the salsa and the crema and I thought I was back in Mexico City. 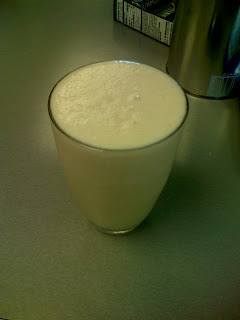 One of the most exciting discoveries of my trip to Mexico City were the agua frescas - that tasty delight of water, sugar and fruit blended into rich smoothness. I first had a taste of agua fresca in Los Angeles back in May during a visit to the then under construction Intelligentsia Silver Lake. Tony and Kyle took us to a local Mexican joint and the watermelon agua fresca was just smashing.

In Mexico City, Ana remarked that she hardly ever drank Coke and now I know why. With such a selection of fresh fruits and juices, who needs Coke? Well, maybe I do, but it seemed like I couldn't get enough of the agua fresca.

Throughout the day, it was sandia agua fresca, toss some sweet slices of watermelon from One Straw Farm, a little sugar, some water and blend that sucker up - seeds and all (sans rind). In the cup, the seeds will fall to the bottom but the drink will be luscious and sweet. Making it really was quite simple.

In the Philippines and Hawaii, lychee is quite popular. In fact, I have some very fond memories of my friend bringing me grocery bags filled with freshly picked lychee. Immense.

But here in the wastelands that is Maryland, fresh lychee is hard to come by, so canned will do in a pinch. Toss whole lychee (sans seeds) into the blender, add some of the syrup, a little water, some ice and let 'er rip!!! In fifteen seconds, you've got an Asian-Mexican Fusion beverage and you can sell that for $5.95! 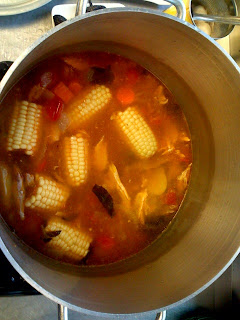 As the day progressed, it was time to get the soup rolling. I don't really know what to call it. Mexican Chicken Soup? Maybe? It's a bastardization of another of Rick Bayless' recipes. Just that I didn't have all the ingredients, so it just kinda "flowed."

Simmer some garlic and onion in oil then add chopped jalapeno and a pound of chopped tomatoes. Add the chicken stock, carrots and whatever else you have handy - oh, did the recipe call for red swiss chard? Oops! We'll use green instead. Did he really say to skim the fat off the stock??? Fat's good for you, buddy.

The recipe called for chicken parts to be added, but having to fish chicken pieces out of your soup and eat it, making your hands messy is just a pain in the butt. Shred that chicken, mister! Then toss it in there!!!n Break up some corn and add that too. Got some tortilla chips handy? Err, maybe not this time... 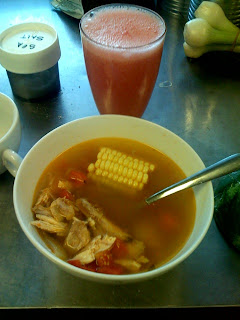 Serving the chicken soup with a glass of sandia agua fresca.

Cover and simmer for 30 minutes, add cilantro and season to taste with salt. Ladle it into a bowl, season with some freshly squeezed lime juice and serve.

Ah, not a bad way to spend another day in coffee...
Posted by onocoffee at 9:55 PM No comments: Links to this post 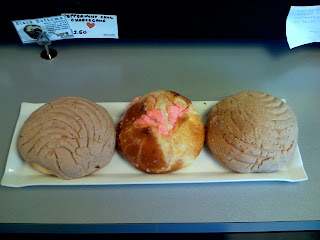 Three conchas hanging out at The Spro.

I want to stake my claim now, before it's too late:

I have had conchas prior to my trip to Mexico City.

I just never knew what they were.

And now that I've had real, authentic, Mexican conchas - battled over by Senora Garcia, I know what they should taste like. Light, fluffy, delicately sweet and covered with a rich, sugar topping. A true concha is divine. All the others are just poseurs.

Unfortunately, these conchas are the latter.

I found them at the local Mexican bakery filled with friendly folk but the bread was rough and on the dry side, which made for an unpleasant eating experience that wasn't overturned with coffee. A proper concha is a delight to behold and perfectly balanced with coffee. Although, the center one with the pink stuff was better than the others.

The search for great concha in America begins...
Posted by onocoffee at 9:55 PM No comments: Links to this post