project hampden: Zell, Zen and the Art of Stress 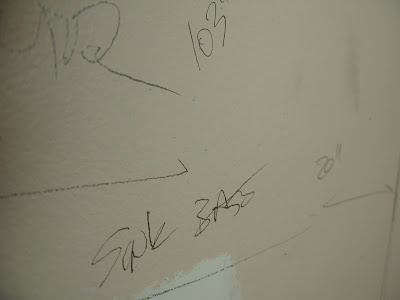 Millwork notes on the wall that have been abandoned. For now.

While I don't remember being stressed on the first day of Jays Shave Ice nearly ten years ago, I do remember that forgot to wear shorts or pants that day. I ended up opening and working the little stand in my black Calvin Klein boxer briefs. I think they looked like tight bike shorts (with an escape port). Either no one noticed or no one wanted to embarrass me, but no one ever mentioned it. In fact, I didn't notice until we were there and about to open the doors.

We built the second Jays Shave Ice during the off-season, so it didn't matter if it took months to build, we had the time. And building the coffee bar at the Library that became The Spro wasn't that stressful either. We took our time and I drove the hour out to Jeff Givens' place in Sykesville to work on the cabinetry.

But this time, I feel under the gun. Rent is looming over my head and we need to get things finished and opened before my lease terms says we need to start paying rent. Doom on you, dickhead.

In my mind, things were rolling right along. I had a basic design that was ready to go - even if it did have some unanswered questions. My vision for project hampden was something very simple. Something refined. Elegant, even. I was thinking "French Laundry."

My problem is that I'm not very good at executing colors. Sure, I studied graphic and interior design and have an idea of what I want, but what if it isn't the right idea? Or the right execution? Perhaps I'm second-guessing and getting caught in analysis paralysis. Either way, I wanted to get out of my preconceptions and head trash and go for something new. I called up an old buddy and asked him to come and have a look.

Two weeks ago today was our first meeting. What I expected to be a quick, one-hour session about layout and colors turned into a four-hour marathon of design, discussion, marketing, concept and directions for the space that I never had even considered.

Take the bathroom, for example. It's a nice bathroom and I thought it is nicely appointed. No. It needs to be redone. All the detail work we talked about incorporating into the space and then to leave the bathroom as is? Evidently, I must be a charlatan. He made a good point: all the detail and the customers will see it as a facade if the bathroom detail is incongruent with the rest of the space. Then I remembered that even the French Laundry put custom lampshades on their bathroom wall sconces. Damn that Keller. 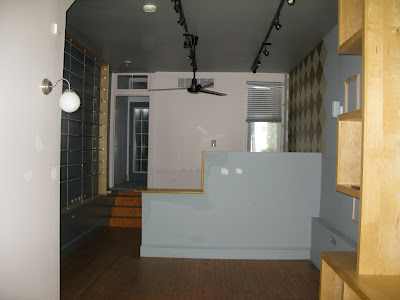 I liked the space for its' rustic charm. Luis, the designer, wanted to alter the interior and smoothen things out. Bring elements together and making them seamless. Incorporating the downstairs basement into the overall look of the space. We should smoothen this wall and eliminate that one. Good Lord, I must look like Daddy Warbucks.

Of course, in the back of my mind, I'm thinking that costs are already spiraling out of control yet we're nowhere near the $100K mark. I think about the stories I've heard about Doug Zell and how much it took Intelligentsia to open their Los Angeles operations and smile to myself. All this fret and stress for what Zell would consider a pittance to open a store. Somehow, the thought of Doug Zell not being too concerned about the cost of this buildout soothed my mind and lowered my heart rate. The percocets can stay in the drawer for at least another week.

Luis and I have met several times over the past two weeks and it's been a constant battle. For him, it's been about understanding our processes, where I come from and what we want to do in the new space. For me, it's been about letting go and being open to new things. I feel like I'm constantly repeating my mantra of: I'm open to exploring anywhere you want to take us not because Luis needs to be reassured of my support but more because I need to remind myself that it's okay and you can keep breathing.

Interestingly enough, Luis has taken our discussions to places that I never thought before. He's even taken us to concepts that are being pioneered by others. It's really interesting when, without prior introduction, your designers' natural train of thought brings you to a concept where you have multiple espresso machine stations that can handle your customers - Intelligentsia's new shop in Venice Beach sprang quickly to mind.

In the coffee business, we spend a lot of time thinking about how other coffee people have done it. We want to see the other shops to get ideas. Lately, I've been spending a bit of time at the mall observing other retail shops. These companies have spent hundreds of thousands of dollars getting their presentation right and there's lots to be learned from just observing. Even the Venice Beach Intelligentsia's concept of organic stations with baristas who greet you with handheld checkout computers comes right out of Apple Computer's retail playbook. Looks like I'm not the only coffee person lurking around the mall.

In order to bolster our ranks at The Spro, I put out an ad in the Baltimore CraigsList for new baristas. While I needed only one, I ended up with four promising candidates. This poses a unique problem. The Spro is now labor heavy. Luckily, a couple of them currently work other jobs and we can take our time training them over the next month or two as we build to bring them up to speed. The concern here is to control our costs during this period of excessive costs and stable revenue. Let the labor costs run amok during this period and there could be some problems.

But things are rolling along. We've got a great crew of baristas and barista candidates, and we've assembled a great team of designers, contractors, equipment suppliers and finance people to help us move forward. I'll report back again as things progress.
Posted by onocoffee at 8:54 AM 1 comment: Links to this post