I've been in Mexico City for less than two hours and I've already hit Dakota Avenue fronting my hotel, the Crowne Plaza, in search of tasty bites.

Things threatened to derail quickly when I first ask the deskman and bellman about where to eat. "Do you like Italian?" Yes, but only when at home or in Italy. "Burger King?" The King and his battered fries can suck it. "How about Mexican?" I suggested. I think this caught them off guard. Then they started recommending a restaurant down the street with mariachis.

Now, I have nothing against Mariachis. In fact, I like their music. But in this metropolis, a restaurant with mariachis probably means: "tourist." And have little patience for pricey and watered down Mexican food designed for the gringo palate. I want the Real Deal and asked them about some little place on the street that might be good. That's took them by surprise.

Perhaps it's because the Crowne Plaza is a relatively fancy hotel catering to people that have a modicum of money -business people, tourists, etc. Or maybe because we're in the heart of Mexico's World Trade Center. Whatever the case may be, it was obvious that these guys don't get this kind of question too often.

"You mean like the food we would eat?" came their response. Yes, absolutely. In the end, they didn't have any real recommendation other than to stroll down Dakota and see what was available. I think they were expecting me to run off to the Popeye's on Filadelfia.

I'll be honest. I'm intimidated. Not because of Mexico City's reputation as one of the most dangerous cities in the world (after all, I do live in one of the most dangerous and violent cities in America). Not because I'm worried about being kidnapped for ransom. But because my capacity for Espanol isn't very good - and these people speak fast. Spanish on the streets of Mexico City is fast and can be filled with all sorts of colloquialisms that aren't covered in Rosetta Stone.

I'm bad enough when you're speaking slowly and clearly. It tends to fall apart under the stress of the street and standing in line for chow. 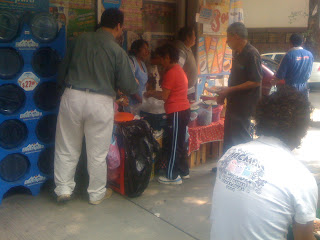 In a city of 20 million people, there's got to be something to eat somewhere - and at all times. Luckily, Dakota Street doesn't disappoint. In the short, two block walk from the hotel there's at least a half dozen places to eat. I walk by them all to get a feel for them and decide which one to try. Some are packed and there's no hope of me getting a table. Then I spot this man and woman standing in front of a package goods store, selling food out of plastic buckets. Gosh, that looks promising. Buttressing the potential for good food is the swarm of people milling about holding styrofoam plates, eating Lord Knows What.

This is where the intimidation factor kicks in. As long as I don't speak, I can blend relatively into the scenery. Once I have the speak, the jig is up. I linger to the side for a few minutes to get an idea from the other customers on how to order. Most of them are pointing at the various stuff in the buckets. There's a tomato based thing, a greenish eggplant thing, a meaty thing, some rice and there's also beans. The man is orchestrating the bucket side while his wife (I presume) watches over the beverages and what looks like some sort of fried taco or flauta.

So they're pointing and they're mumbling their discussion in Espanol mas rapido. I'm really quite hungry and need to go for it, so I step into the line. There are two guys ahead of me. I watch and strain to listen intently to their orders. The guy directly in front of me has said something to the man and pointed at the tomato thing, the meat thing, as well as the rice and the beans. All four ingredients get dropped onto a styro plate and the man looks to me.

Merde. I'm in trouble. The man starts talking, asking me what I'd like. I don't know how to answer, so I start to point at the tomato thing, the rice and the beans. I also pointed at the meat, intending to order the same as the guy ahead of me, but things have gone awry - he actually expects me to comprehend what he's saying. In the heat of the moment, I hear one word: chicharrones and I give a basic answer of si. I'm not exactly sure but I think the tomato thing is actually fried pork skins, how could I go wrong?

The man continues in Spanish - fully expecting me to understand and speak. I hear the word taco. I don't really want this as a taco, I wanted it on the plate with a fork, but I don't know how to tell him that and end up nodding my head and saying: si, gracias. 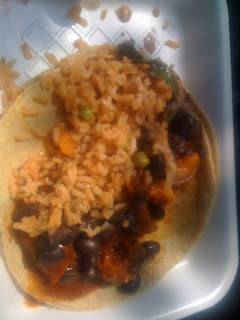 In a flash, he's dropped two corn tortillas on a styro plate and added the chicharron, rice and beans and I move away from the fray to eat in peace.

Ay, Dios Mio - it's amazing. In this tomato sauce, the chicharron have soften and turned into this unbelievably complex and tasty dish. Mixed with the rice and beans, and this thing is sublime.

But what really makes it is the tortilla.

Strangely enough this past Saturday, after the farmer's markets, Spike and I stopped by Tortilleria Sinaloa for a couple of tacos. They've got good tortillas made from Maseca, the processed corn flower. I've heard so much about masa-based tortillas that I was wondering what the difference in taste was. Today, I found out. In spades.

Last year, I'm sure I had masa-based tortillas, but I wasn't well-versed enough in Mexican cuisine to tell the difference. Today, the difference was stark and astonishing. The corn masa tortilla was alive. The flavor danced on your tongue. Whereas Maseca tortillas have a light corn taste, masa gives the tortilla a pronounced corn flavor. It was exquisite. I wanted to eat more.

Okay, for all intents and purposes: I can't speak Spanish. I wanted to try another round but I didn't know how to say it. I decided to move on and try something else. But I still needed to pay. I don't even know how much my food costs.

The way it works here is that you're served, you eat and then you pay when you're finished. This allows the average diner to come back for seconds (or thirds) without the trouble of paying as you go. Without knowing how much I owed, I figured that the 100 peso bill in my pocket would be more than enough. In the end, I think she gave me back 90 pesos in change. The exchange rate here is roughly ten pesos to the dollar. This amazingly flavorful and tasty taco cost me one dollar. I could go for more.

And I did - just a block away. 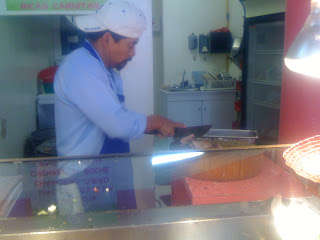 The Taquero at Don Buche.

As I wandered off strolling the streets, I still felt a bit hungry. That's when I spied Don Buche, a tacos carnitas shop just a few steps from the man and woman with the chicharron. This is a formal shop selling pork tacos and they've got everything carnitas under the sun. Luckily for me, they have a sign and while I didn't know what most of those taco variations meant, I ordered the first one anyway. Dos tacos, por favor. That was easy enough.

The taquero dropped four corn tortillas on the comal and then proceeded to take a hunk of roasted pork and chop it up into rough chunks. Drop them on the tortillas, add some chopped onions and cilantro and you're done.

Over to the side was a selection of condiments: salsa verde, a chunky salsa and some cut limes. I prepared mine with some lime juice and then sampled the salsas. The verde was tasty but on fire. The chunky was delicious and complex without the immediate heat of the verde. I ended up using a lot of the chunky salsa. 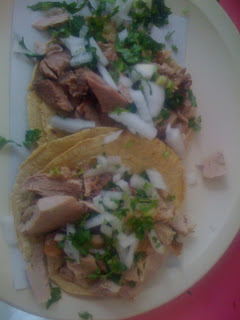 Again, the tortillas were delicious, but this time, two tacos were too much. I should have ordered just one. The second filled me up and I was done. Had I been thinking, I would have ordered one, which would have left me open to stop at another stand and taste something else, like a torta, or a quesadilla.

I continued walking around the neighborhood and spotted numerous stands and joints that I would like to try out. Judging by the looks of it, I could spend my entire week eating in this neighborhood and never exhaust all the options.
Posted by onocoffee at 5:39 PM 2 comments: Links to this post