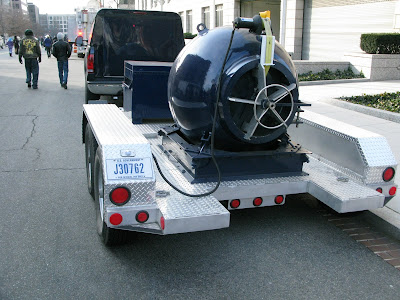 A comforting sight on the way to the Inauguration.

With Silver Tickets in hand (actually tucked in my Marmot fleece vest three layers under), we made our way down to 3rd Street NW under Naval Intelligence Police escort until we could go no further. It's Inauguration Day in Washington, D.C. and we had made our way down here to ostensibly be a part of American History.

For weeks the media has been warning that DC would be packed with up to four million people. The MARC train was sold out. Amtrak was sold out. Buses were in short supply and the DC Metro is jammed to the gills. So much so that full trains would bypass stations entirely because those stations were too crowded for the people on the trains to get off. Cab drivers would interrogate you before picking you up to ensure that you weren't headed for the exclusion zone surrounding the National Mall. All over DC, streets were closed for security, for events, and for who really knows what. 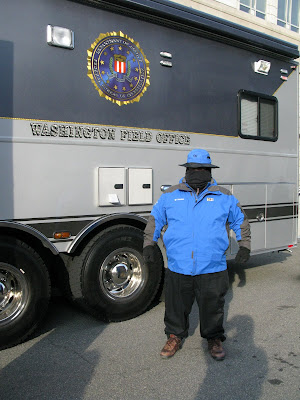 Have balaclava. Will travel.

Army soldiers were stationed in pairs of two all over the District. Unarmed. I had to wonder why. Maybe their command wanted to send a kinder, gentler message to the people. Maybe they didn't want the District to look like what it really was: a city under seige. No weapons. I thought that was foolish. What good is a soldier without his weapon? What if they happened upon a suicide bomber terrorist? Were they going to throw their coffee cups at the bomber? Would that be enough to stop an attack?

I hoped I wasn't about to find out.

Once we reached the exclusion zone, things were a bit different. Officers, agents and soldiers of various agencies and battalions gently guided the masses towards the unknown. Volunteers with red knitted ski caps directed people to where they needed to be. But, in the end, it was one massive FUBAR. 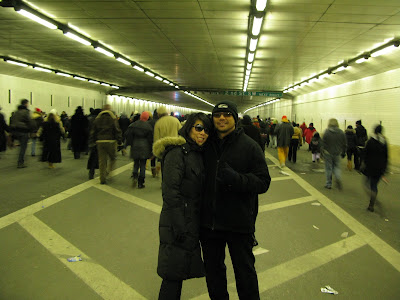 People will ask me: "How was it?", "What did you think?" and "Was it amazing?" My answers will be: "Cold", "Not too much" and "Sure." I guess it's amazing to be at the inauguration of the first African-American President of the United States, but was it really that great of an experience? I have to say No. It was cold. It was crowded. The streets were closed. Cabbies wouldn't take you anywhere near the exclusion zone. And instead of making it easy to reach the National Mall, they made it harder.

I had Congressional tickets for the Silver Standing area, a large grassy spot in front of the US Capitol's reflecting pool - about as close as you can get without a seat. Third Street bisects the Silver Standing Area, running north to south. However, instead of letting people access the area on third from the North, they closed off access in that direction and forced everyone to walk through the 395 Tunnel to the southern side of the National Mall where the masses with Silver tickets thronged the single, solitary entrance and a line snaked through the streets for five blocks.

For weeks, the news had been reporting that "up to five million" people would flood the city. Five Million. Expecting that many people, you'd think the powers that be would anticipate that perhaps they should have more entry points - the Silver Standing area alone had 100,000 tickets, quite a bit more traffic than one checkpoint can handle. Instead of making it easier, they made it worse.

We fell in line about five blocks away, next to running busses pumping their diesel fumes in our faces. When my descendants ask me what I remember of the Obama Inauguration, this is what I will tell them. Standing out in the cold with your Uncle Bob, freezing out butts off with the smell of diesel fuel in the air and carbon monoxide filling my veins. A morning to remember. 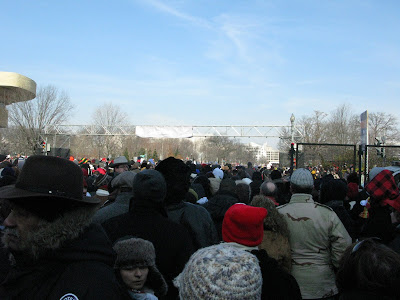 Joining The Surge at the Silver Gate.

But we were patient. We had come all this way and braved snow, sleet and extreme cold to be here this morning. Quite honestly, I was up for abandoning the line, making our way to Capitol Hill and finding a nice bar with a television where we could actually see Obama taking the oath of office, but we decided to tough it out.

As we got closer, we started to notice other Silver Ticket holders walking past. No longer were they asking if this was the Silver line. Now they were stating that the silver gate had been closed and that they were heading towards the National Mall. Should we step out of the line and join them? Hell no. I hadn't endured all of this pain and intoxication just to join the unwashed masses on the National Mall in the freezing cold. We're gonna find a nice hotel with a television on the lobby or press on until we're turned away by Secret Service.

And press on we did.

By the time we reached the Silver Gate at Third and Independence, the line had disintegrated into a thriving mob. They had closed the Silver Gate and people were pissed. Chanting began. People held their Silver Tickets above their heads. They were getting angry - I guess I wasn't the only one who endured all of this who was unhappy about joining the unwashed masses. 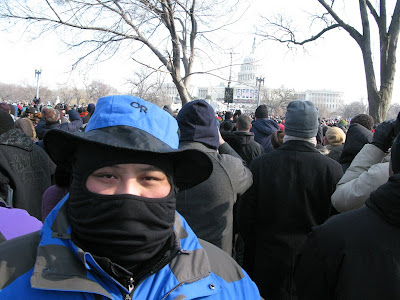 Positioning ourselves for Obama.

After ten tense minutes of the mob thronging and threatening to surge, the guards decided wisely to let us in because Yes We Can. Moments later, the tide started to flow and soon we were inside our designated standing area.

And here's the ironic thing:

All week long, people had been telling us to get there early. People were lining up to get into the National Mall by 4:30am. At 8am, when we started watching the crowds on the apartment television, people were already crowding the mall - but there was plenty of space in the Silver Standing Area. We didn't leave the apartment until about 10am. We entered the Silver Standing Area just as the Inauguration was beginning at Noon.

I hate to wait in lines.

But the worse part:

All of these lines and delays were caused because of the security checkpoints where everyone was screened before entering the area. By the time we reached the Silver Gate and the mob demanded to be admitted, they just let everyone in. No screening. No security. No need to hide a bomb on your body, you could have carried it on your shoulders and gotten access.

Once inside, we found a decent enough spot from which to pretend we were actually watching the inauguration. Of course, we chose the one spot in all of Washington DC without close viewing range of a television or JumboTron, so we really couldn't see anything except the red draping around the archway on the Capitol were allegedly Obama stood while taking his oath. At least they had speakers set up so we would hear the oath being fumbled.

If all of this sounds negative, it really isn't. It just wasn't that magical, wondrous and enchanting experience that so many have alluded to. It was what it was: standing out in the extreme cold with a whole bunch of people attempting to watch Barack Obama take the oath of office. The really odd thing to my mind is the notion that we were a part of history. We just happened to be there. Most of the people there watched the oath on a television screen - something that could have been done in your pajamas in the warmth of home. Just a bunch of people standing in the cold. Like those addicted to cigarettes who stand out in the cold to feed that addiction, we were out in the cold feeding something else. 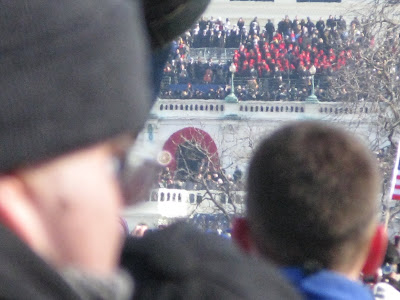 Barack Hussein Obama is somewhere in there being sworn in as President of the United States.

But all wasn't lost. The truly notable event in DC was the people. Americans from all walks of life and nations coming together in great masses and actually getting along and being happy about it. You expect in large crowds of Americans a lot of anger towards each other and the endless waits. Not so. Everyone got along and definitely had a sense of brotherhood and perhaps even euphoria.

Of course, this is America, and that sense of brotherhood is always fleeting and temporary and by tomorrow we'll be back to hating and shooting one another. But for this brief moment in time, the possibility of America's promise and the people we could become actually materialized. 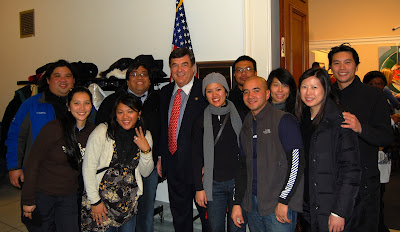 Myself, Brindisi, Michelle, Walter, Reese, The Bob, Ryan, Diana, Emma and Gaston with Congressman "Dutch" Ruppersberger (D-MD).
Posted by onocoffee at 11:02 PM No comments: Links to this post