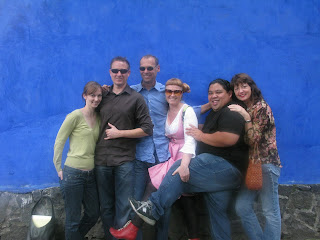 Annette, Brent, Andrew, Sonja, Me and Terry at the Museo de Frida Kahlo.

So far, it's been nothing short of a whirlwind 48 hours here in Mexico City. We spent our day yesterday , and half our day today, at the judges training workshop. It's interesting to watch the judges develop their skill because it's a struggle to balance the judges desire to score accurately and sharply with the need to reward the barista competitors appropriately. The days are long and jammed with information, and somewhere you find balance.

Outside of the workshop, us "foreigh" judges have been making camp at the Crowne Plaza Hotel where we start off with morning buffet breakfast at the hotel, then buffet lunch at the workshop site and then dinner out on the town - all of which have been taken care of by our gracious hosts Arturo and Cleofas.

From my perspective, there's been a positive angle to the judges training. In the meeting room next door, they were holding a practice session for the upcoming Miss Mexico / Miss Universe pageant. That means our workshop hotel has been flooded with some of the most beautiful girls this nation has to offer. It's been a visual treat - even those most of the girls are a bit too emaciated for my tastes. 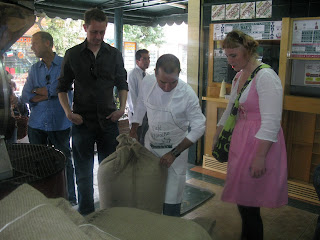 Victor of El Jarocho pulls some coffee for us to see.

At night, our small clan gathers and heads out for dinner. The first night, we walked down the street to a restaurant called La Strega - The Witch, serving quite good Italian food. Last night, we were taken to one of the most outrageous and amazing Chinese restaurants called Hunan where they prepared the peking duck not in the traditional rice cake but in Mexican corn tortillas. Quite delicious.

Tonight, we were whisked off to Polanco (the Beverly Hills of Mexico City) to eat Alsatian/French food at L'Alsace. Again, the food here was quite good. One of the girls recommended their steak tartare over the ribeye and I went for it and was handsomely rewarded. I just wish the portions were slightly smaller. 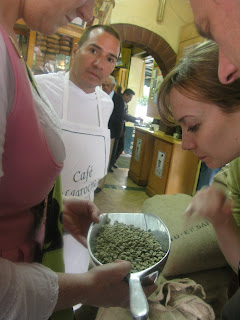 But after three nights of fantastic meals at some of the citys' best restaurants, we're beginning to wonder when we're going to try some traditional Mexican cuisine. All of this great food is nice, but we're in the home of Mexican Cuisine. I'm hoping we'll be eating some great Mexican soon.

Meanwhile, we spent this afternoon touring parts of the city. First, down to Coyoacan and the Museo de Frida Kahlo. It's an excellent stop and highly recommended - especially if you know anything about her and her famous husband Diego Rivera. From there, we walked around the zocalo where they've closed the plaza while repaving the streets around it with concrete faux cobblestone.

After walking around a bit, we headed over the famed El Jarocho where our incessant picture taking attracted the attention of the owner Victor who brought out an apron for some of us to wear in the photos and showed us samples of his green coffee. I guess he was happy to have a bunch of roasters from Santa Rosa, Iceland and London hanging out at his cafe. 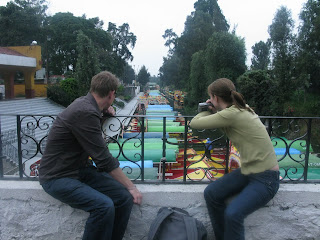 Waiting for the boat at Xochimilco.

After some of the girls did some shopping, we made the long trek down to Xochimilco where we hired a boat for an hour and took a lazy cruise down the canals while being tempted by transient vendors hawking everything from grilled corn to silver jewelry to dolls to blankets, roses and more. Some would come alongside in their own boat while others would hop aboard ours. Since it was a slow tourist day, everyone was in a selling mood and it was a bit odd to take on passengers whose only mission was to sell you something.

And as luck would have it, it started to rain while we were on the water. First, light drizzles, then the downpour. And just as Annette was saying that she heard a forecast for thunderstorms, the rumble of a thunderstorm trembled in the distance. Happily, there was no lightning. 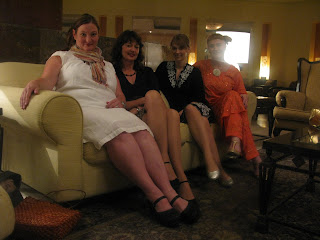 The girls ready for dinner. Men around the world are insanely jealous.
Posted by onocoffee at 11:59 PM No comments: Links to this post