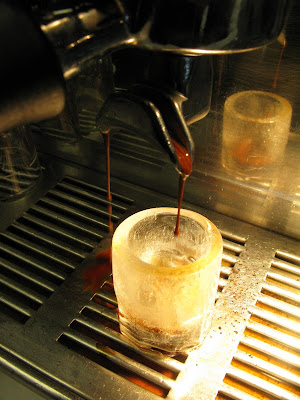 The other day, as I was wandering around a local store, I spied a cool silicone ice mold to make ice shot glasses. I had to have it and brought it back to The Spro for a little informal testing. Filled the mold and into the freezer it went. Six hours later, the water had frozen and the ice shot glasses were ready so i popped one out.

What to do, what to do? Sure, I could have planned it out better and made up some nice coffee concoction to play around with, but I didn't. I was too busy working and making drinks for customers. instead, I decided to pull a double shot into the ice shot glass. Maybe the shape and the ice would do something wondrous.

While it looked very cool - especially if you let the ice warm up until it becomes clear, the espresso was just as nasty and metallic as I remember. Ugh.

But at least I've got some cool ice molds for future experiments.
Posted by onocoffee at 8:17 AM 1 comment: Links to this post