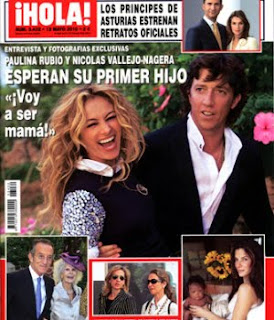 Or I should say: "Paulina Rubio esta embarazada."

Yes, yes, I know that embarazada does not mean "embarrassed."

But it's Cinco de Mayo here in the United States (and around the world too) and while Americans of all spectra are spending this evening partying it up with tequila, margarita, nachos and other miscellany that passes as "Mexican Food", the rest of Mexico is going about their usual business.

In Mexico, according to Anita and Sylvia, "Cinco de Mayo" is simply the Fifth of May. Everything is normal. There's no drunken partying and playing of Ranchero music, other than what normally goes on. In other words, it's just another day.

Only in America do we celebrate Cinco de Mayo. In fact, El Universal, Mexico City's largest newspaper had no mention whatsoever about "Cinco de Mayo." The biggest news? That Paulina Rubio is pregnant. That Nick Nagera dude is one lucky guy.

In spite of this little hiccup in understanding Mexican culture in America, we decided to run a little special today at Spro Hampden - a little Caffe d'Olla, the traditional Mexican coffee boiled with piloncillo sugar and cinnamon sticks.

But simply taking a pre-mixed Caffe d'Olla wouldn't be thoughtful enough, so we took some of our PROISH Organic coffee from Chiapas, brewed it in a french press then mixed it with some house made d'Olla syrup consisting of piloncillo and canela boiled down with water for a decent facsimile instead of actually boiling the coffee together, which tends to highlight the bitterness of the coffee.

Add that with a little rewrite of the Spro menu with my shaky Spanish and voila! a little Cinco de Mayo celebration sin tequila.

Maybe it's time to go out for a couple of drinks...
Posted by onocoffee at 10:38 PM No comments: Links to this post 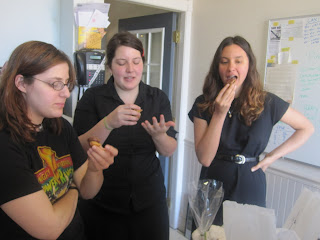 Lindsay, Bex and Ilenia discuss the finer points of pastry. 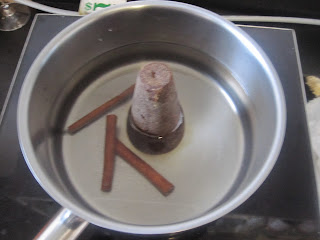 d'Olla Syrup base: piloncillo, canela and water.
Posted by onocoffee at 3:24 PM No comments: Links to this post