I'm guessing, but it's probably been about eight years or so since the last time I played golf. My father is an avid golfer. Most people like to breathe, my father likes to golf. It's his all-consuming passion.

Me, I'm a bit more casual about golf. I own one club: the Taylor Made Ti Bubble 2 driver. Back in 2001 (or so) when it was introduced, it was a monster. A huge headed driver. Today, it's still a good driver though Vanessa's driver looks like it dwarfs mine.

While I don't play very often, nor would I say I have a particular passion for the sport, there's something about hitting the ball in the sweet spot of that metal driver that makes me as excited as a pig roasting on an open fire. That special "tink," preceded by a skillful "whoosh" as the club slices through the air and the head only contacts the ball. None of that dead thud you hear when the club catches the ground destroying the shot. That "tink" sounds as good as sex - without the baggage or ongoing expense.

I'm back on the links in Reisterstown because my friends have lured me away from my cave and into the open sunlight. Dark storm clouds ride the horizon but we're setting off on foot in search of PGA Glory.

As I was waiting for everyone to arrive, I decided to hit a basket of balls on the driving range. Two days before, I had conferred with my dad, whom I interrupted while he was busy gardening. Tickling his passion, he immediately dropped the gardening to talk shop with his son who owns one club. I was seeking his advice on a small quiver to use for today's action. Just a few clubs in a lightweight bag so I could walk the course. He supplied me with a thoughtful set of seven clubs: putter, 6 & 8 wedgewoods, 7 wood, sand wood, pitching wedge and my aforementioned driver.

Dad is a golf fiend slash aficionado. Always ready to lend his knowledge or hold an impromptu golf clinic - whether at the house, on the course or in a ballroom, it doesn't matter. Needless to say, I've been subjected to numerous golf clinics over the years. Golf outings with my dad when I was younger always consisted of a nonstop stream of coaching and swing analysis. To be honest, it really drove me up the wall.

And while I may have been irritated with the non-stop golf clinics of my youth, many of those lessons remained buried in my psyche and surfaced on the driving range. Where to place your feet, where to position the ball, the angle of your arm in relation to the club, the method of swing - it was like greeting an old friend after many years apart. While there were many strokes of the dreaded thud or hooks to the right or slices to the left, sixty-five balls later, my swing felt like it was starting to gel.

As we set off on the course, I found never-experienced-before glory. While the triple-bogey on the first hole was nothing to write home about, the drive was straight and far. The second hole landed me on the green. The third hole I stroked par. I had never performed this well on a golf course - ever. I was stoked. Even Gerry, Rod, Vanessa and Scott were playing with beautiful strokes.

The fourth hole brought us to our water obstacle and I choked. Sliced it to the left and dropped it into the water. What happened? I thought too much. I let the water obstacle cloud my judgement and made me think about the stroke rather than relax and feel the stroke. The second drive was a bit too far but much better.

As we neared the cup on the fourth hole, the skies blackened over and large droplets of water started to fall. Uh-oh. In a moment, a torrential downpour was drenching me to my core. Hiding under a large maple tree teased rather than relieved. A mad dash to a cinderblock shed by the water obstacle promised refuge but inside the 4'x4' structure was a water pump and 480 amp power distribution. Not an ideal place to be soaked to the bone and in a downpour.

We found refuge in a mid-course bathroom and waited out the storm. By the time the rain had subsided, the greens were flooded and the marshal came by in his truck to close the course and escort us out.

Thus ended my first round in many years. Perhaps the best game of my life, wiped out by a late spring downpour. Could I have stroked par today? We shall never know. 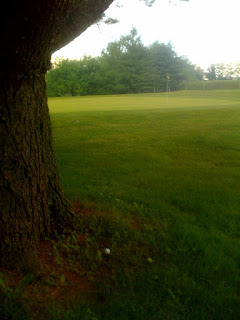 Posted by onocoffee at 2:59 PM No comments: Links to this post 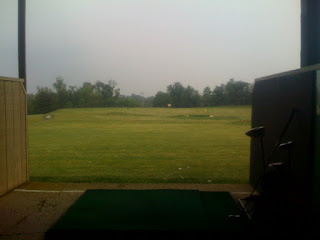 Posted by onocoffee at 2:26 PM No comments: Links to this post 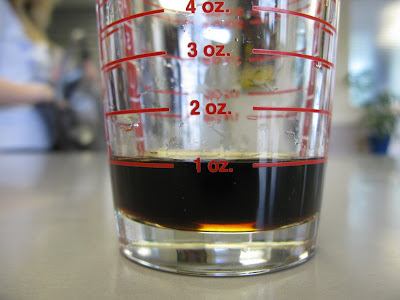 One ounce of formulated syrup base.

I'm continually reminded how much the world is dwindling on an almost daily basis.

For a couple of years now, The Spro has been serving cane sugar-sweetened grey market Coca-Cola imported from Los Estados Unidos de Mexico - until now.

Recent changes by the World Trade Organization struck down the tax on High Fructose Corn Syrup imported into Mexico. The elimination of this tax makes HFCS cheaper than cane sugar in Latin America, leading to the displacement of sugar as a sweetener in the last bastion of somewhat better-for-you food in the world. After a nice period of enjoying the crisp, clean flavor of sugar Coke, the dreaded HFCS has reached our shores... again.

Within a day, I received a call from one of my customers and from my staff asking why the labels now said "high fructose corn syrup" on them. What??? I don't know. I'm going to call my importer.

After a very heated "debate" with my importer on why the F would I pay more for HFCS Coke from him than Mid-Atlantic Coca Cola (assuming that I would even consider carrying HFCS Coke), I had them come back to pick up that weeks' delivery of 22 cases of HFCS Coke.

Which leaves me at a bit of a crossroads. Do we acquiesce and start stocking HFCS Coke (a horrible idea)? Or do we find another path? 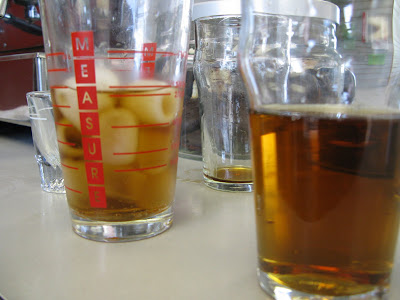 Tastes of Baltimore, back from the 1920s.

Many years ago, during the Jays Shave Ice days, I started thinking about serving handmade Coke. The notion became a whirlwind in 2004 during my visit to the World of Coca-Cola in Atlanta. There, a live soda jerk, made Coke by the glass by using Coke syrup and a soda gun - a glimpse of old school and just absolutely brilliant. Problem was that Coca-Cola did not sell their flavoring to anyone else but their bottlers, and American bottlers of Coca-Cola do not produce their syrup in a box with anything other than HFCS. So, even though I could buy a bag of syrup for fifty bucks, I was still making the same crappy HFCS-sweetened Coke I could buy pre-bottled.

Going back even further to the beginnings of Jays Shave Ice was a cola formulation that we stumbled upon that, evidently, was the cola flavor of Baltimore from the 1800s. In the days before Coca-Cola became the mega-behemoth it is today, local soda fountains and their jerks used locally-sourced flavorings and ingredients to make their wares (who would have guessed???). In Baltimore, during the late 1800s and early 1900s, this was the cola flavor Baltimoreans knew and loved.

As is the course of our industrialized nation, this local flavor all but disappeared in the wake of Coca-Cola. Until now.

Culling our resources, I have been able to secure some of this Old Skool Baltimore Kola Flava and have been reworking our formulation for cup service. The idea is to bring back that soda jerk feel by handcrafting the original cola flavor of Baltimore and offering in lieu of HFCS Coke. This formulation of cola is decidedly simple. Just cane sugar, water and flavor to crate the base syrup. Then hit the syrup with a soda gun et voila! handmade cola to order!

I'm getting the formulation and the service steps down and hope to bring the cola to The Spro in the next couple of weeks for a test run.
Posted by onocoffee at 1:32 PM 3 comments: Links to this post