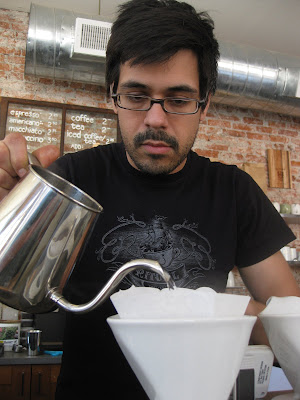 Since I've decided to once again roll the dice and risk total financial ruin, I thought I would take the day to visit the fine coffee establishments in the City of Brotherly Love.

It was a beautiful, sunny day today with temperatures in the mid 70s. Just gorgeous and the perfect day to do a cafe crawl. First stop: the eponymous Ultimo Coffee - the newest coffee joint in the city, owned by the husband and wife team of Aaron and Elizabeth Ultimo.

I've known Aaron since 2005. A thoughtful and passionate barista, I've watched him as he trudged his way up the ranks at murky coffee and then decided to breakaway and move to Philadelphia where he took up residence at Spruce Street Espresso. A year or so later and he's just opened his own joint.

I found it interesting to visit his shop because you can see the heritage in his coffee experience. Aaron admits that their bar layout is nearly a direct reproduction of murky's old Arlington layout: register to the right, then pastry with the espresso machine tucked into the corner and then the grinders. Even the fridge under the La Marzocco GB5 and Cirqua system under the grinders is straight out of the murky Arlington playbook.

While the heritage of the layout may be murky, one can easily see an evolution in the design. Where murky's seemed haphazard, the bar at Ultimo demonstrates refinement and finesse. From the cultured stone counters to the careful selection of counter height to the gorgeous wood planking fronting the bar - even the excess coffee grinds are carefully whisked away instead of being allowed to gather and fester around the grinders.

The interior decor is a mixture of raw brick walls, steel piping, wood and glass garage doors that open the space and give it a wonderful atmosphere in great weather such as this. I arrived shortly after 12 noon to find Aaron hard at work reviewing applications and preparing for interviews.

To my mind, hiring is one of the hardest jobs facing any shop owner. You're looking for someone to represent you and your shop. Someone to be your standard bearer. Choose poorly and it's utter disaster. Choose wisely and you can travel the world - the only problem then is that you're away too often and your empire goes kaput.

So, Ultimo Coffee is a good-looking place but how is the coffee? Whenever I visit a reputable coffee shop, I prefer to ask the barista to choose for me. I presume that the barista knows his/her coffee best and is in a better position to guide my choices towards whatever they think is most exciting that day. On this bright and sunny day, Aaron is taking me to Kayanza, Burundi for the Bwayi and I'm lovin' it.

He's brewing the Bwayi with a Beehouse pourover on a Mark Inman designed brew stand. Readers of this blog know that I've been pretty down on pourover brewing. I just don't think it's very interesting, exciting or compelling. Why do pourover when you can do Fetco drip? I mean really, the barista simply pours water into the cone and lets it flow - how compelling is that? It seems to me that now that the push-button convenience of The Clover has become passe and fallen out of favor that pourover is the next "Big Thing" in Third Wave Coffee. Boring.

At least that's the attitude I'd been harboring for quite some time but watching The Ultimo in action changed my mind. There's a method to this madness. A slow, tender caring for the drip coffee. A caring that reminded me of the action at Caffe L'Ambre back in Tokyo. Maybe it's time to investigate this pourover thing a little more closely. 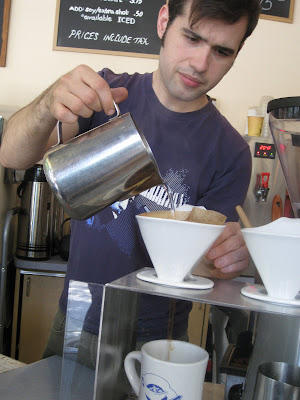 Bidding my friends adieu, it was time to see what else this city had to offer. Should I jet over to Passyunk Avenue for another cheese steak shootout between Pat's and Geno's? Or should I see what's happening over at Spruce Street Espresso?

The first thing that struck me about Spruce Street Espresso was its' size. It's a small joint, much smaller than I had anticipated and I was a bit embarrassed when the barista, Charlie, asked me if I was Jay Caragay. Woah, I always find that strangely odd and quite embarrassing, though I am honored to be thought nicely of.

Like I said, it's a small space but they make the most of it. I really dug the banquette seating along the perimeter walls and the cocktail sized table rounds. The feeling was comfortable without being crowded. Again, I was offered a pourover (these things are popular now) of Counter Culture's La Golondrina Ariel Pajoy. Nicely sweet and with hints of orange peel. I liked. Score two for pourover.

With it nearly hitting 3pm, I trucked over to Chinatown to seek out one of the most elusive coffee joints on the East Coast.

For years, I'd been hearing rumors of some Chinese place that served vacuum pot coffee. I'd heard that it was some seedy joint in North Philly. I'd heard it was members only. I'd heard that the Chinese Triad hung out there. All sorts of rumors and if they were true, I was ready to journey into the Heart of Darkness to sample what may be coffee glory. 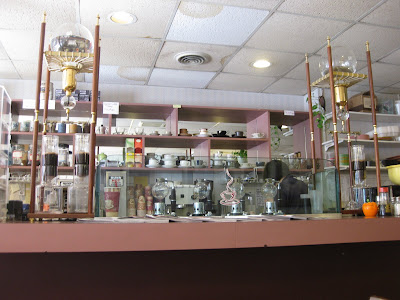 Turns out that Ray's Cafe is a casual coffee and tea house in a populated part of Chinatown and still on the beaten path. Parking was easy and the lady was friendly enough. Ray's offers a selection of coffees done in a very Japanese way. They even had coffee jelly like I had seen at Caffe L'Ambre.

Old School Chinese tea joints share a patina of age on them and Ray's is delightfully so. This isn't some fancy French Laundry-esque kind of place that I'd like to build, it's not even the remnant frat house look that's so popularized by indie and Third Wave coffee shops. This place is strictly Chinese Tea House - and they even offer a food menu. Good thing too since I had only eaten an English muffin with peanut butter at 9am.

Getting down to business, I ordered a round of curried chicken dumplings and chicken in black bean sauce with brown rice. Sadly, the menu is very Chinese-American but at least it tasted pretty good.

But the food was only fuel to keep me going and to prevent the caffeine from driving me into an epileptic fit. I was here for the coffee and since it was blazing outside, I ordered an iced coffee from the brew tower with sugar and cream.

The coffee people may think that I chickened out by ordering it with sugar and cream, but let me tell you, it was necessary. This was deep and rich coffee. Thick, roasty and full-bodied. The sugar and cream were there to tame the beast. It was angry, but in a good way. Rich and very "coffee"-like, it made a nice accompaniment to my black bean chicken though I think it would have done very well with an order of tiramisu.

Back onto the street, it was time to take a detour to one of my Philly haunts: Holt's Cigar Shop on Walnut. A mecca for all things that fine men can savor. From exquisite pens and accoutrements, to pipes and a selection of hundreds of cigars. If you have an appreciation for fine cigars, Holt's is a must. Lots of great cigars at decent prices. I picked up a box of Tatuaje Reserva A Uno. Ah, life is good. 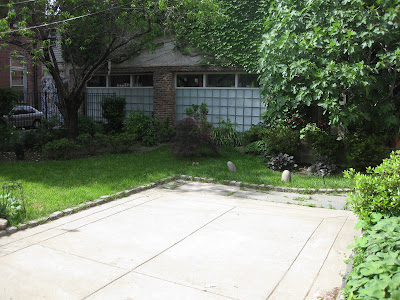 Next up on the coffee crawl was a place called Chapterhouse Cafe & Gallery that was recommended to me by John Hornall. Recommended for the design of the space and not the coffee - as evidenced by their use of the onboard grinder tamper and the resultant blonde streams emanating from the espresso machine. I ordered an iced white pear tea.

While the coffee doesn't seem up to scratch, the space really is nicely done. Modern and spacious, there's plenty of seating - if you can find one that's not occupied by some laptop lover who's been camping out there all day. Plenty of seating and all of it full. Once again I'm reminded why my next shop will not have Wi-Fi or Internet access. Please, enjoy the coffee. Enjoy conversation. Enjoy the surroundings. But please, get out and let other people have a chance to enjoy the space. 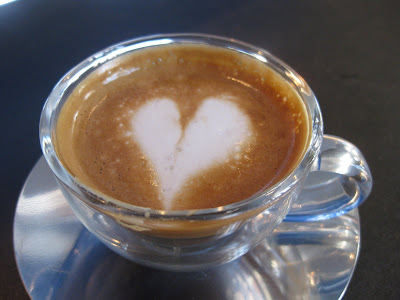 Espresso macchiato at Lovers and Madmen.

With rush hour starting to fall, I headed over to University City to a new joint called Lovers and Madmen by the University of Pennsylvania campus. Ah, UPenn. I once applied to the Executive MBA Program at Wharton. I even sat in some classes and found them quite enjoyable. Alas, I was denied. Never mind the prestige of attending Tisch, I wasn't good enough for the Ivy League. Oh well, I guess the truth is that an MBA doesn't really help you rise up the company ranks if you're already the CEO.

Lovers and Madmen is a nicely done place with clean everything and a shiny blue La Marzocco FB80 2group espresso machine. The staff is friendly and enthusiastic. There's even back issues of Barista Magazine on the tables for customers to review. I wanted to leave my Barista Magazine cover shot on top of the other issues but, like Wharton, I was also deemed unworthy of gracing the cover of Barista Magazine...

They're new, they're trying but they lack a real barista to lead them. Enthusiasm and commitment are extremely important things but when everyone is still green and you're relying on your roasters' representatives to teach you, it's gonna take awhile before you really get it going. I hope they keep up the hard work and I look forward to checking them out again on my next visit to Philly. 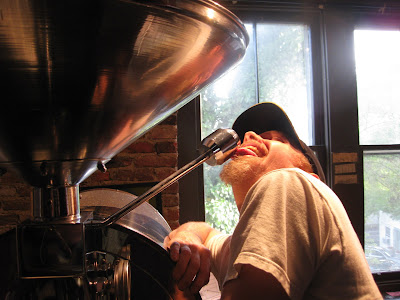 After a long day touring the city, it's time to head out west to see old friend John Hornall at Chestnut Hill Coffee. For awhile, Chestnut Hill was the only game in town. Now they're working hard to maintain high quality standards and it looks like it's doing well for them. By the time I reached the cafe, it was already past closing time, but I know what the coffee here is like, this was a social call and it was time for us to go out and eat big sandwiches at McNally's Tavern. 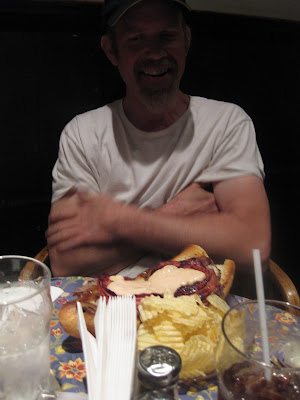 John and the Schmitter® at McNally's.