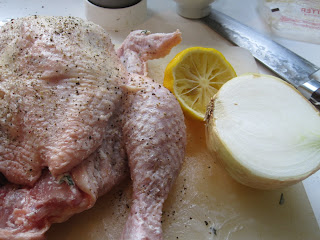 Perusing the latest issue of Cook's Illustrated, I came across their quick roast technique for roasted chicken and decided to give it a try. The key is to heat a skillet first, placing the chicken on the skillet and the dark meat to cook with conduction while the rest of the bird is heated with convection.

Cook's Illustrated gives a different preparation of the meat for those trying to jam a roasted chicken in after work and in time for dinner, but I wanted to go with a more traditional method of seasoning. A little softened butter, rosemary, lemon, sweet onion, salt and pepper. And since I'm not really in a rush, a pop in the refrigerator to dry out the skin a little. 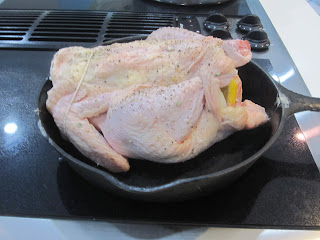 After a very successful test a couple of weeks ago at Vanessa's, I grabbed another French heirloom chicken from KCC Natural Farms in Forest Hill, Maryland. I had come across KCC at the Towson Farmer's Market and the thought of a French heritage bird intrigued me. The flavor was so good that I grabbed a couple more.

If you're used to grocery store, commercial chickens, these will look positively anemic. Afterall, they're only about three pounds. Those grocery store Purdue suckers are upwards of five pounds with massive breast meat that comes from a short life sitting in your own feces. 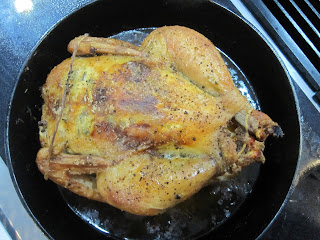 Fresh from the oven.

With the bird in hand and a solid helping of minced rosemary in butter, separate the skin from the meat with your hand, starting by the tail bone. Rub the butter into the space between the skin and the meat and be very liberal with your butter.

From there, it's a simple squeeze of lemon over the skin then a stuffing of the remaining lemon half and half an onion in the body cavity before trussing legs and wings. You want to truss the legs together and the wings to the body to prevent scorching (with the wing tips) and even cooking. Good results can also be had by leaving the legs dangling but it doesn't make for a nice presentation. 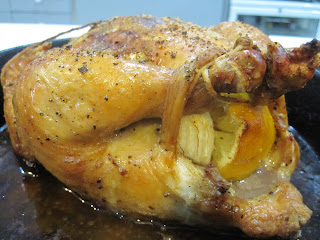 After a brief spell in the refrigerator to dry out the skin a little, select a skillet that is just wide enough to hold the bird and high-walled enough to contain the juices that will emanate from the meat. Place the skillet on the center rack of the oven then preheat the oven to 450F.

Once at temperature, remove skillet and place bird in center. It should sizzle nicely. Place the bird in skillet back into oven and roast for 25-30 minutes (the bigger the bird, the longer the time). Once the time has been reached, DO NOT OPEN THE DOOR and shut the heat off, allowing the residual heat contained in the oven to continue cooking the bird. Do not open the door at all. 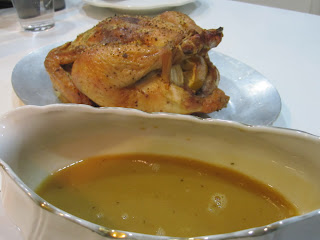 Eat with a pan sauce.

After another 30 minutes in the oven, remove bird from skillet and allow to rest for 20 minutes. During this time, you can make a pan sauce by deglazing the pan of fond with some onions, white wine and whatever else you feel like putting into your sauce then mounting it with a little butter.

Finally, it's time to carve and eat. I recommend the use of hands.

Posted by onocoffee at 12:17 AM No comments: Links to this post