I Must Be Desperate 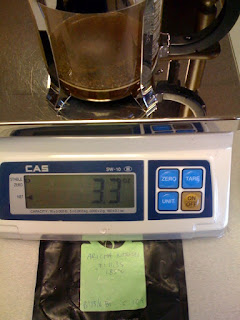 The Aricha Natural brews away.

With this new tide of seasonality in coffee brings scarcity of the coffees I seem to enjoy most: Africans. While I know quite a number of people detest or despise the fruity natural process of East African coffees, I tend to like them Stumptown's 2003 lot of Ethiopia Harrar and Caffe D'Bolla's 2009 lot of Bonko Black Sun were particularly memorable coffees for me.

Lately, it's been non-stop Indonesian and Central American coffees. Non-stop. One after the other. Over and over again. I'm awash in earthy and bright coffees. And I'm getting tired of it.

Yes, this movement towards seasonality is a good thing, but while I've been able to process and put down foodstuffs like corn and preserves, this whole seasonal coffee thing is still new and storing coffees for the lean times hasn't come to fruition (yet).

Meanwhile, the parade of Central American and Indonesian coffees continues and I'm starting to drag. I need variety and I'm starting to despise this whole seasonality thing. At least when it comes to corn in February, I've got frozen stock from the height of summer to enjoy.

Tim had given me this bag back in April while attending the SCAA conference in Atlanta. It was a bag of his Aricha Natural and there was just a little bit left. Maybe I could get a small press pot out of it and onto the scale it went.

Ugh, six grams. Six. Grams. That's not even enough to make an eight ounce cup. Crap, I'm doomed. Maybe I should toss it. Oh no, one whiff of the berry explosion and I had to have it. Six grams be damned, I'm gonna drink it all.

After a quick (and careful) calculation, I determined that six grams would produce 3.3 ounces of coffee. Should I run it through the pour over? Ugh, no. French press is my preferred method of brewing and french press it would be.

In the end, I had about half a cappuccino cup of the Aricha Natural. Delicious and beautiful - even after all this time in frozen storage. Thank you Tim Wendelboe and may I have some more, please?

Posted by onocoffee at 3:20 PM 2 comments: Links to this post