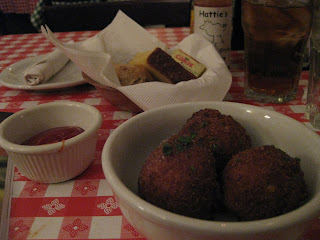 After six hours winding my way through the Pennsylvania and New Jersey countryside, with a long stretch on the New York Thruway, I've found myself at the door of Hattie's in Saratoga Springs.

It pains me when the curtain has been pulled back to reveal me as a charlatan but I can't hide the fact that I heard about Hattie's through Bobby Flay. Personally speaking, I can't stand Bobby Flay. Ever since his days with Jackie Malouf on Grillin' and Chillin' he's just irritated me. One day, quite some time ago, I was flicking through the tele and happened upon his new FoodTV show where he goes out and "challenges" a random chef on their turf and with the dish they're known for. The setup is that the chef is told that they're being screen-tested for a new television show and on the day they tape the chef, Flay shows up to challenge the chef to a cookoff. What a dick.

Anyway, when Flay came to town, chef Jasper Alexander remained supreme in their fried chicken cookoff and I made the decision that day that I must journey to Saratoga Springs and here I am, in the cold, hoping that they'll have a table for me at 8pm.

By the looks of it, Saratoga Springs is a touristy town. It looks like it was built to cater to tourists. Happily, Hattie's is quite down home and rustic looking - and not in a prefab, T.G.I.Friday's kind of way - and, most importantly, it's rather quiet on this Monday night. 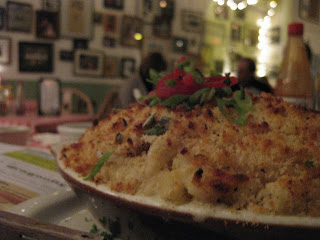 The Monday travel schedule had me worried enough that I called yesterday to ensure that they would be open today. It would have been my luck that the one day I manage to travel to Saratoga Springs would be the day they are closed. I would cry.

When I walked in, the restaurant was quiet. A couple to my right were finishing their meal and a four top in the center of the room had just begun. The staff was casually milling about awaiting the night to come. I was relieved that I could be seated so quickly.

Right off the bat, I started with a sweet tea and a glass of water. While reviewing the menu with my server, one of the kitchen crew remarked that I should know the menu by now since I'm here all the time. Huh? Turns out that there's some guy working in the comic book store next door that looks just like me. Could it be? Could my doppelganger live in Saratoga Springs? Too bad I won't have the time in town to find out. At least the cook promised they would take good care of me.

Not long after, an order of freshly fried hush puppies arrived at my table with a side of ketchup. Golden delicious inside and crispy brown on the outside. Beautiful. As a hush puppy should be. In another moment, a basket of warm corn bread and biscuit landed, with butter. Now was my chance - butter on corn bread is a good thing so, therefore (I'm hypothesizing now), butter on hush puppies should be even better. Wow, I'm so glad my mom gave birth to such a smart son...

The meal would be simple. First round: macaroni and cheese. Second: fried chicken. Third: dessert.

As I walked in and spied on the couple finishing their meal, I noticed the girl had barely touched her order of mac n cheese. It was unbelievably huge, she had barely put a dent in it. I made sure to order the smaller, appetizer portion - with shrimp and bacon as my server enthusiastically recommended.

Soon, a hot pile of pasta, cheese, bacon and shrimp, covered with bread crumbs and seared under salamander landed in front of me. I gingerly took a bite. It was hot. Blisteringly hot. Let it cool for a few moments and then began a thorough investigation. 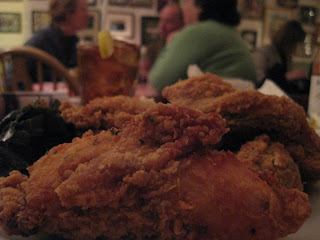 
It was good. It was as mac n cheese should be, but something was missing. It tasted kinda limp. The ingredients were all there. They just didn't spring to life. What this dish needed was some seasoning. A liberal application of salt.

A douse of salt later and there it was: Mac N Cheese. As It Should Be. Alive. Tasty. Decadent. The bacon adding that pleasurable flavor and the shrimp adding a new dimension that I've never had in Mac N Cheese.

In a few minutes, the fried chicken landed on my table. Four pieces. A half chicken crisp and fried to golden perfection. Just look at it: amazing. Served with mashed potatoes and collard greens. Nice.

The chicken was good. It had a spice blend that I thought was okay. It just wouldn't be my choice of spices. I prefer very simple preparations of just salt and pepper for my fried chicken. This chicken had a bit of a zing to it but also needed a liberal application of salt.

Actually, by this point, I was starting to worry. Worry that my taste buds my be losing it. Have I been eating everything so salted that I've lost the ability to discern what is and is not "salty"? Would my preferred level of seasoning leave others gagging in a salt water ocean?

But I can't taste the flavors. They're not pronounced. So I salted anyway. And once salted, the chicken flavors came to life.

While I didn't find the seasonings to my tastes, the chicken skin was absolutely wonderful. Light, delicate and perfectly crisp. I haven't been able to fry chicken like this. This fried coating was just sublime. I couldn't do it better, and I want to do it better (or at least as good). Maybe Jasper will smile on me one day and share his secret to this wonderfully light, delicate and crisp skin. 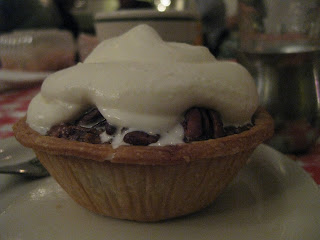 For dessert it was a simple Pecan Pie with whipped cream. Tasty, sweet and that lovely texture that should accompany a proper pecan pie. It was also searingly hot. Add a cup of coffee with sugar and cream and all is well. Of course, it's not coffee to write home about or even drink on it's own - even my server said "it's just coffee" when I asked her what kind of coffee it was. Definitely not of the caliber we know and love but a nice accompaniment to the pecan pie nonetheless.

In the truck I've got my trusty Igloo cooler loaded up with ice and ready to hold this trips' bounty. As I leave Hattie's I'm warmed by the thought that in my bag I've got two pieces of chicken, mashed potatoes, collared greens and the rest of my mac n cheese for a late morning breakfast in Montreal tomorrow.

I already know it's going to be a beautiful morning.

The Most Beautiful Gas Station in America

It seems that I can never leave well enough alone.

Just when I'm starting to get comfortable at home, it's time to hit the road again. This time, I'm in the trusty GMC Sonoma and we're whizzing through the Pennsylvania countryside somewhere around 72 mph. Why 72? Because it's faster than the 65mph speed limit and still a few miles below the ten miles per hour over imaginary cutoff that we believe law enforcement uses as the threshold to stop speeders.

In other words: I'm an outlaw. A man with a casual disregard for authority. A wise-cracking raconteur and general scoundrel. A modern-day Han Solo (minus Chewbacca).

I'm on the way to Montreal for the annual Canadian Barista Championship where I'll be serving as the co-emcee for the events. At first, I thought I might be judging but the judges workshop was yesterday and there was just no way I could break away from the home front before today. Oh well, at least there's Au Pied du Cochon.

A Road Trip is a rare event for me and America looks grand from the view through the windshield as opposed to the view though the window at 35,000 feet. As we whiz though the Delaware River Valley, sharp rock formations jut out amongst the rapidly turning fall foliage. It's been unseasonably warm these past couple of weeks but today is starting to get crispy. There's a chill in the air that's just conducive to this kind of driving.

The crisp weather means that the windows are slightly cracked and the heater is set to low, counterbalancing the crispy cold air. In my hand, I've got a fine Paul Garmirian cigar, some Turkey Hill Orange Tea in my cup and the images of Sting's young teacher the subject of schoolgirl fantasy cooing through the ipod connected to the stereo. There's a warm feeling in my soul when I realize I've made the wrong turn and ended up in rural north New Jersey.

Luckily, I've got my trusty iPhone and after a quick consultation (and the decision to avoid tracking back across the Delaware River and paying the bridge toll), I'm on backcountry roads winding my way north where I decide to make a gas, bathroom and stretch break in the small hamlet of Blairstown. A place where I inadvertently find The Most Beautiful Gas Station in America.

For all the crap that it has to take as the state living in the shadow of New York, New Jersey's greatest secret is that the general public is outlawed from pumping their own gas. Know how you gotta stand out there in rain or cold, pumping your own gas? Not in New Jersey. While it's not the full service of my youth where the attendants checked your engine fluids and tire pressures, in Jersey they pump the gas for you while you can remain comfy in the safety of your own vehicle.

Maybe there just isn't any guys left in Blairstown. Maybe they're in the fields, or off to the Big City seeking their fortunes. Whatever the case may be, it's to my advantage: the girls pumping the gas at the Sunoco are downright hotties.

As I pull in and jump out of the Sonoma, the hottest one comes up to start filling my tank. She's about 5'3", blonde hair, blue eyes and just gorgeous. The tank is only half full but it's time for a fill-up. Another cute blonde is working the other side of the island and a third girl with sandy hair tucked under a floppy hat, wearing dark sunglasses is sitting outside of the station building smoking a cigarette and looking generally cool, she directs me to the restroom.

We chat and banter for a bit and I ask for directions to Stillwater Road. My girl has seen it but can't remember how to tell me to get there - even though she lives near it. The other girls laugh and point out that Stillwater is just down the road. Simply go straight and turn left at the stop light.

I would have chatted with them a bit more but I'm on a schedule for dinner and I don't know if I'll ever make it back this way again. After a few more minutes chat, I'm back on the road and on my way to dinner in Saratoga Springs.
Posted by onocoffee at 10:45 PM No comments: Links to this post