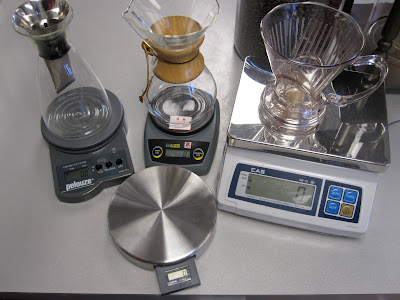 The Scales of The Spro: Pelouze Postal Scale, Ohaus CL Scale, CAS digital scale and IKEA scale, along with some of the brewing methods we'll be employing.

I don't know how it is for most of you, but I always seem to find details that I just never gave too much consideration towards giving me serious obstacles. Take scales, for instance.

Scales seem so ubiquitous in what we do that I don't really think too much about them. Yes, they're necessary and yes, we've had all the scales we needed at Towson, so I never really put that much thought into them. But now with the impending opening of project hampden and its' multiple brewing methods, the need for really great scales has suddenly come into focus.

Aside from our main scale in Towson, we've gotten by with small kitchen scales, postal scales and whatever we've had at hand. Now that our brewing is more focused and serious, these stand-by scales have started to show their weaknesses. From the ergonomics to the length of time the scale stays on to the shape and space, all of it takes a toll and needs reckoning.

Where once was a void that I didn't have to worry about suddenly has become a kink in our system that's growing more desperate with each passing day.

This week, a new scale showed up at The Spro, the Ohaus CL Series Scale. It's a laboratory scale that is either battery or wall socket powered. It's small form factor means we can set up several brews side by side and its' design allows the scales to be stacked on top of each other for greater storage capability. Plus, the scale stays active for four minutes, much more generous than the 25 seconds other scales allow during moments of inactivity.

Initial impressions from our baristas has been quite positive for the Ohaus CL and I'm thinking that it might just be the one we're going to go with - thank goodness it doesn't cost an arm and a leg!
Posted by onocoffee at 6:47 PM 1 comment: Links to this post