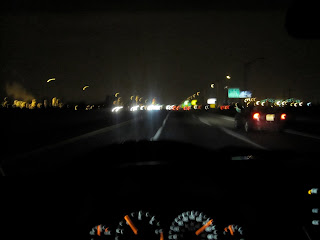 Hurtling myself towards New York City at illegal speeds.

The little Sonoma is back on the road at high speed as I navigate my way back towards CoffeeFest New York. Of course, the title is a bit more than misleading since "CoffeeFest New York" is being held in Secaucus, New Jersey. Perhaps they're a bit geographically challenged at CoffeeFest or perhaps "New York" sounds better than the Sopranos-esque "New Jersey."

Whatever the case, I'm heading for yet another coffee trade show where friends and others will gather for a few days to talk coffee and compete against each other. It's also another regional barista competition that is sure to bore the crap out of even more bystanders who cannot decide if the competitions are marginally more exciting than watching grass grow.

With the iPod cranking out favored tunes, like "Temple of Love" by The Sisters of Mercy, and the Sonoma set to "cruise," I'm reminded of a trip very similar to this one back in 1987.

Back then we used to make regular trips to The Big Apple for nights of hanging out, looking cool, acting pretentious and generally wasting our time (but who can blame you when you're decked out in Commes des Garcons?). On the particular night in question, we were making another evening run to Manhattan's Tunnel nightclub in my trusty 1986 Volkswagen GTI.

Because of the expected night on the town, with Mike Eringis riding shotgun, I was pretending to sleep in the back seat while Joe Toro piloted the GTI at high speed. I say "pretending" because I was lying there scared as the little GTI shimmied and shook in ways that I wasn't used to. To say that we were pushing 100mph would not be an exaggeration, but I can't confirm those speeds because I was too busy keeping my eyes closed envisioning what it would be like to crash at 100 mph.

Would we be flung from the car as it cavorted, rolled and tumbled along the New Jersey Turnpike? What would it be like? How would it sound? Would we hit the jersey wall? Or shriek across the grassy strip off the side before tearing through the chain link fence and bouncing off some trees?

Already tonight I'm in an irritable mood because I did what I always seem to do: update my electronics right when I'm about to leave on a trip.

I don't know what I was thinking when I clicked on "yes" to allow iTunes to update the software on my iPhone. It was perfect. All my contacts were intact. All the messages in place, notes preserved and text messages archived. iTunes even kept two backups of my iPhone data on the hard disk. But I had to click on that damn button and the thing crashed my iPhone.

Two hours later, after multiple restarts and uploads, the iPhone was back and running but all data had been lost. iTunes even seemed to dump and destroy the two backups of the data. WTF?

Luckily, I was able to restore the contact info off another application and I left town two hours late with some semblance of data on the iPhone. Screw you, Apple Computer.

As I drove up the Turnpike in a disagreeable mood, my mind wandered back to that trip in 1987. What if I crashed tonight, twenty some years later? Would it be any different? The commute to New York City takes about three hours. Tonight I would do it in about the same time. But that night in 1987, we made the same trip in two hours and fifteen minutes. I don't know how fast we were going because I was too scared to watch, but it was definitely faster than the 75mph I was doing tonight.
Posted by onocoffee at 11:58 PM No comments: Links to this post