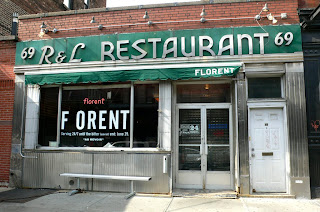 On an average weekend (or weeknight, for that matter) from 1987 through 1988, it wasn't uncommon for us to hop in a car (or Amtrak Metroliner) and hit Manhattan for a night, or two. The downstairs VIP room at Tunnel, Nell's Basement and, once in a while, Palladium (but never Limelight) were our regular haunts attending parties being hosted by James St. James, Michael Alig or John Sex. It was a wild and absolutely ridiculous time. The late 80s: excess to the Max Headroom.

Like I said, we were pretentious fucks. Underage. Club-going and wearing the latest in avant garde haute couture. Clothing from designers like Rei Kawakubo (Comme des Garcons and my favorite), Azzedine Alaia, Stephen Sprouse, Jean-Paul Gaultier, Yohji Yamamoto and whatever style we decided to make ourselves (like the armored jackets made from safety pins).

In reality, we just wanted to be cool. We were young, hip, fashion forward and not afraid to let you know how lame you looked.

But after a night of partying in whatever Manhattan club suited our fancy, we usually ended up at a little diner in the meat-packing district called Florent.

Back then, the meat-packing district was just that: a bunch of meat warehouses with none of the restaurants or retail shopping that exists today. At 3am, it was dark and just starting to come to life with guys that worked in the district. Tough, burly guys who packed meat all day long. When we would actually emerge from Florent an hour or two later, the sun would be coming up and the neighborhood would be bustling.

Without realizing it, Florent was my first real introduction for French cuisine. I don't remember most of what we ordered back then, but I'll never forget the escargot bubbling in butter. While most of the world ate pancakes or burgers after a night of partying at 4 in the morning, we sat there eating snails in our sweaty designer clothing. Good times.

I write about this because during one of our conversations this past weekend, it came up that Florent will be closing soon. I looked it up online and found Frank Bruni's blog entry

After 23 years, Florent will close their doors this month. Seems that the rents have skyrocketed in the meat-packing district since it became a shopping and tourist mecca that's part of the Disney-fication of New York City. Seems that tenants like the Apple Store have caused rents to quadruple in this part of Manhattan, forcing out many of the businesses that gave the area it's unique charm and raison d'etre.

It's a sad time. A time for reflection. Maybe a time for a quick jaunt up to the city before Florent closes.

If you have time to visit, do it soon and have the escargot for me.