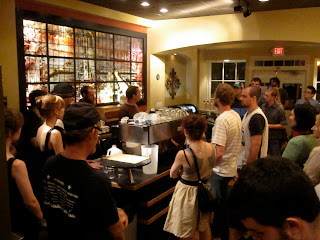 On the way back from New York City, I decided to make my way to Philly for their monthly Thursday Night Throwdown.

The latte art "throwdowns" have been going on for a few years now. Not sure how they started but I do know that the macchiatto throwdowns was something I started at a Counter Culture DC event a few years back - when we were running low on milk.

From there, the throwdowns started happening on Thursday nights when the chaps at Atlanta's Octane started hosting them and they've spread to different cities across America - with some cities hosting video throwdowns where baristas from two cities would battle head-to-head (via television). 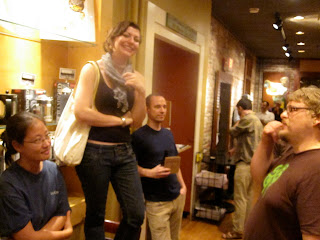 Chelsea sports a sky box seat to spy on the action.

Truth be told, I'm not really a fan of the TNT thing. Latte art is cool but it's not that important to me, ergo, I'm not one to promote them heavily. Especially when you go to one and it's just poorly executed - like the TNT in Washington DC I went to in January. That was brutal.

Lots of baristas. Lots of cups to pour and each person made their art, presented it to judges who scored the designs and then, at the end of the night (hours later), would reveal the winner. THAT is painfully boring and we left before my turn came up.

I'm much more a fan of the Sudden Death format that pits two baristas against each other and the two arts are judged on the spot with the winner moving forward and the loser eliminated. Much more interesting for the competitors and the spectators. 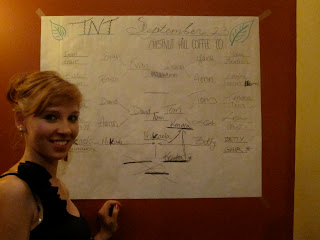 Luckily, the Philly TNT follows this Sudden Death format and I'm relieved. I'm also asked to be the "Ultimate Judge" in the event the two judges split their votes between the two competitors, it becomes my task to break the tie and determine the winner.

The competition is brisk and furious, and we're pounding through the brackets. At first, I thought I wouldn't be tapped to judge much at all, but the first three sets required my judgement. After watching the brutal consternation of Joe Bastianich on MasterChef, I conjure his aura as my projection, eliminating the lesser of the two arts with cold brutality.

I think I prefer the harsh but determined method of Gordon Ramsay. 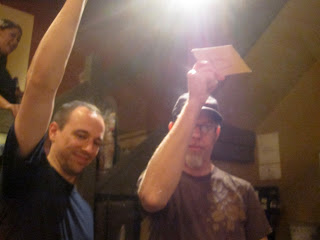 The art ranges from blobby and eliminated to pretty decent. Seriously solid art is difficult to come by, and understandably so since the pressure is on. On the line are pounds of coffee from Counter Culture Coffee, a bag of cascara and cold, hard cash. The competition is fierce and I even see the latte art king, Aaron Ultimo falter a bit.

As Aaron grasps his way through the rounds, I await the opportunity to break his tie. After many years in the USBC with Ultimo on the judges side and me on the competitors side of the table, it's payback time... 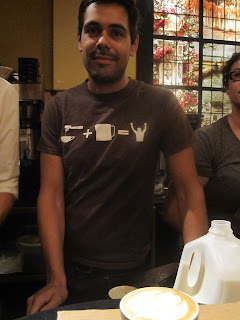 In the semi-finals round, I have my chance. An Ultimo tie-breaker. Revenge is mine and the dish is very cold...

As I review the two cups in front of me, it's a difficult choice. Usually, Aaron's latte art are tight and defined with good contrast. The two in front of me are only a few points apart. They're close, but not in a good way. They're a bit blobby and asymmetric.

But it's my job to choose the one which I think is best and it turns out that it's Ultimo's art that moves to the finals. In the finals round, Aaron's art is clearly the best with his hallmark definition, contrast and symmetry - now, that's the Ultimo I know.

In October, the Philly TNT will be held at Spruce Street Espresso with a Halloween costume theme.
Posted by onocoffee at 6:23 PM No comments: Links to this post