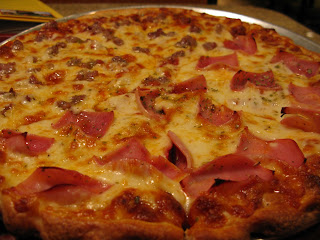 The 12" half imported ham, half sausage pizza.

For some reason, as I was pondering my existence at The Spro yesterday, it hit me: I needed pizza. But not just any old crappy pizza, I wanted "the best." The problem is: what is the best pizza in Baltimore? After some scary recommendations from customers (like Pizza Hut or Papa Johns), I decided to scour the Internet for help.

The Internet is both boon and bane. Sure, there's lots of information on the superhighway, but you never know the source. Is it trusted? Do you agree? Who knows - it's all a crapshoot. Take Chowhound, for example: lots of great info but do you really agree with that moronic etiquette lady? Or those that tout the praises of commercial chickens?

Then there are the food critic blogs - take the Baltimore Suns' food critic, for example. Amateurish reviews and lame support for national chains while defending that practice with a quip about owing nothing to the local restaurant industry while boasting about going the local farmers' markets then making pejorative statements about a restaurants kale soup tasting like "kale." Duh.

The problem with online reviews is that unless you've gotten to know the source, you really don't know anything. That person claiming such and such is "The Bomb" may only mean that once you've tasted it, you wish someone else had dropped a bomb on the place before you got there, saving you from the onslaught of mediocre (or worse) food.

A search of the Internet on The Best Pizza in Baltimore leads one to a continual choice: Pizza John's in Essex. 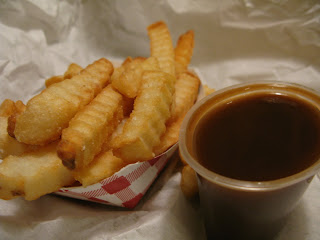 Pizza John's is a veritable institution. For forty years they've been cranking out pizzas to multiple generations of Baltimoreans. I didn't know what to expect since I had never been there. It's a casual, counter service joint that's brightly lit, recently remodeled and with an atmosphere that I felt immediately at ease.

But the one thing you notice is that this place has been designed and built to do business. The dining rooms can easily sit 300 people and the bank of cash registers and design of the kitchen means that this place can do heavy volume. It's nice to see a pizza joint that actually re-invests its' money into its' operations, and these guys weren't screwing around when they redid this place.

The first problem: Pepsi. No Coke.

If I hadn't made a pilgrimage to Essex for this pizza, I might have walked out.

For my meal, I decided to go with the small (12") pizza split with half imported ham and half sausage, plus an order of gravy fries and a large Pepsi. Once you place your order, they give you a number and you find a seat in one of the vast, but comfortable, dining rooms.

Those that know me know I have a pleasant tummy, but one that always finds itself restricted in the typical restaurant booth. Happily, Pizza John's booths are amply spaced to accommodate customers like myself with pleasant tummies. Of course, this could also be a testament to the decline of American diets and the increase in American waistlines, but I try not to focus on those considerations.

While waiting, I was reading Rick Bayless' Mexico: One Plate at a Time when the very friendly Greek (she told me) lady asked me if I was a chef because I was reading a cookbook. No, not a chef. Not in this lifetime. She told me stories about how her and her husband used to own a Greek restaurant in Highlandtown before he suffered a stroke. Tragic.

A few moments later, one of the locals came up looking rather friendly and asked me if I was the guy from MadTV.

We joked around for a moment and I told him that I wasn't Korean and that I wasn't on MadTV but thanks for asking. I don't think he believed me as we shook hands and he departed with his friends.

It's cool to be recognized (or even mis-recognized) in public, but I just wish it was by fanatical female groupies who want to rip off my clothes and take advantage of me.

After a few more minutes, my order: "Number 753" is called out on the speaker system and I go to pickup my tray of goodies. The pizza looks good. It features a unique squiggly crust that resembles a pie crust and the cheese is thick and gooey. The imported ham looks, well, like ham and the sausage is the crumbled kind that I prefer over encased.

The pie is piping hot so it's gonna take a few minutes before I can properly dig in. The french fries are fried to a golden crisp but they're missing the side of gravy and I have to run back to the counter for it.

I ordered the gravy fries because I couldn't resist reminiscing about my childhood where I spent part of it hanging out with friends in Locust Point. Across the street from the house of my best friend Victor, was a small greasy spoon joint that's no longer there but was the place that introduced me to the pleasures of Gravy Fries - crispy french fries doused in brown gravy. To a young boy from the 'burbs, there was no greater pleasure - except for the raven-haired Amanda at Skateland, but I digress again.

Dipping crinckle cut french fries in brown gravy isn't the same as being smothered but that old flavor was there. That salty, generic beefy, industrial flavor - God, you'd think I was eight years old again. Of course, the reality is that these are frozen foodservice fries and canned brown gravy. It's not thoughtful, it's not organic, it's not "local" but God is it good. 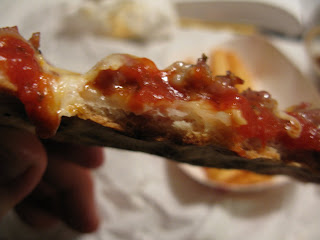 Inside my hot and gooey pie.

I think we should come to agreement that Baltimore pizza is unlike pizza in other parts of the country. This is no Salvtore Cuomo pizza. This is no 2 Amy's. It's no St. Mark's Pizza. It's pizza on its' own.

Hold it up and look at the bottom and the crust looks beautiful. It's brown, caramelized and burnt in spots. Even the crust is a deep brown. The cross-section of the crust looks light and airy, but this has got to be the chewiest dough I've ever eaten. When you see crust cooked like this, you expect it to break away with a crisp crunch. It doesn't. Your incisors can't cut it. The dough must be torn because it's so chewy.

Unlike other Baltimore pizza joints where the sauce is sweet (like Maria's of Timonium), Pizza John's sauce is on the savory side with a definite tomato character. It's quite nice but I wonder if perhaps the sauce is too watery and wetting the crust so that it tears instead of breaks.

Then there's the cheese. This is good, old-fashioned mozzarella and they pile it on thick and bake the hell out of it. Notice I didn't say "artisanal." This is the mozzarella of your youth. Melted mozzarella that forms into thick, gosh I hate to put it this way, sludge. But not "sludge" in a bad way. It's a virtual tour de force of cheese. It sticks and strings and you're fighting to separate it from your slice and it's getting all over your fingers, your forearms, your plate - and it's still so hot that it's sliding and going everywhere except staying on your slice!

But don't take a huge hunk of it into your mouth and a swig from your cold soda. Then it suddenly solidifies, obstructing your trachea and preventing you from breathing or swallowing. From there, it's chew, chew, chew and more chewing to warm it up and break it down once again.

Both the sausage and the imported ham were okay. Actually, they probably didn't matter because their flavor wasn't really pronounced in any shape or form. I could have done without them and probably had similar result.

Was Pizza John's the best pizza? I can't say. It's more in a class by itself (or at least with other Baltimore pizza joints). It's not world-class by any means. Salvatore Cuomo - that was sublime pizza. Pizza John's pizza was: fun. That's the best way to describe it: Fun. It's not delicate pizza. It's not intellectual pizza. It's not "gourmet" pizza. It's simple pizza prepared with frozen foodservice grade ingredients that so reminiscent of the pizza you ate as a child that it's fun - not to mention way better than the national chains.

So, if you're looking for decent pizza that's not fancy but Fun, then Pizza John's is the place for you.

I'm planning on going back next week to see if I can find a groupie that will take me home with her. Fun!