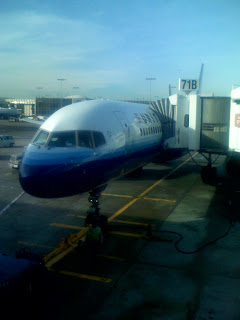 Fly trusty steed! Onward to my destiny with Drew Barrymore!

Here it is. November Four Niner Zero Uniform Alpha. The United Boeing 757 that was going to carry me to Eternal Glory (or at least until the end of 2009).

I was about to reach a milestone. 50,000 miles within one calendar year. Depart Los Angeles in that airplane and I would arrive in Baltimore a Premier Executive member. Exciting.

I had been a Mileage Plus Premier member for about six years back in the late 1980s to mid 1990s when I was still living in Honolulu and flying back and forth. Just three trips a year and I was guaranteed to hit the 25,000 mile mark for Premier. But I had never made the Executive Level.

For the past ten years or so, I had been flying with whomever gave me the cheapest rate. Then, in 2005, I realized again that I was wasting all those miles flown and decided to use primarily United and Star Alliance airlines to rebuild my former glory. With my travels to Africa and across the United States, I started threatening to make Premier and on the way to Tokyo in July, I made it once again. Suddenly, upgrades that were previously unavailable to me were being offered. No more paying for Economy Plus seats, they were on the house. There was a crispness to my step that wasn't there before and the cute front counter girls started giving me bigger smiles and offering me backrubs.

Since I'm not part of club, rumors abound. I was turned away from the USAirways lounge because I wasn't a "Gold Card" holder (Premier only has a silver card) and told that had I had the Gold Card, I would have been welcomed. Premier has its' perks, but only Executives were welcome here.

The website says I get access to an exclusive phone number to take care of my needs. Priority check-in so I can avoid all the families and tourists loaded down with kids, luggage and too many hand carry baggages. Economy Plus seating. Waitlist priority so that I can bypass the schmoes who think they're flying standby ahead of me. And complimentary upgrades that will propel me into First Class and next to that young starlet who won't be able to keep her hands off of me and invite me to join the Mile High Club.

So maybe next time you see me it will be just a quick glimpse of me on the other side of the curtain, laughing, cavorting and spilling champagne over Drew Barrymore's shirt while she feeds me spoonfuls of osetra caviar.

I think I'm looking forward to the Executive life...
Posted by onocoffee at 10:15 AM No comments: Links to this post