DoubleShot Through The Heart And You're To Blame 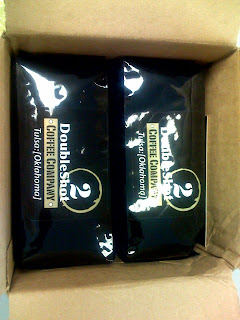 The filmmaker behind The Perfect Cappuccino, Amy Ferraris, was in town the other week for a family wedding and we ended up touring around some of Baltimore's famous centers of good food, namely The Spro and Belvedere Square. During our day together, we chatted about the many different personalities in the industry that she's met while making her documentary and the lively Brian Franklin from DoubleShot Coffee in Tulsa, Oklahoma came up.

Brian is the vocal owner of DoubleShot and host of the AACafe Podcast who went up against the behemoth Starbucks in a David vs Goliath type of shootout when Starbucks wanted to stop them from using the word "doubleshot", alleging that it was an infringement on their trademark. Brian won.

Amy suggested that I try Brian's coffee and offered to contact him on my behalf. It was a nice gesture because I hate asking fellow industry types for samples of their coffee. I'm embarrassed, really. I had met Brian for the first time during this years' SCAA Conference in Long Beach, but it wasn't the first time I'd heard of him.

I first heard about Brian while he was talking smack about the Portafilter.net Podcast that I co-host. His AACafe Podcast had the same complaint that many others in "the biz" have: it's too damn long. Waaah!

Granted our podcasts can run up to two and a half hours in length, but it's like a morning drive radio show - you don't have to listen to it in one sitting. Listen to it in bites and pieces, on the way to work and before you know it, the show's over until next time.

Two pounds of coffee, a package of Nissin Ramen and two DoubleShot Coffee stickers arrived today. We tore into the Kenyan coffee right away, pressing out two 48z press pots of the stuff. Really nice vanilla and woodsy notes. Planning on using the coffee for tomorrow's Concha Tasting. The espresso will end up in our guest grinder for free sampling to all comers until its' all gone. With the espresso, I'm getting some definite hints dried cherry.

Thanks Brian for the coffee!
Posted by onocoffee at 10:41 PM No comments: Links to this post