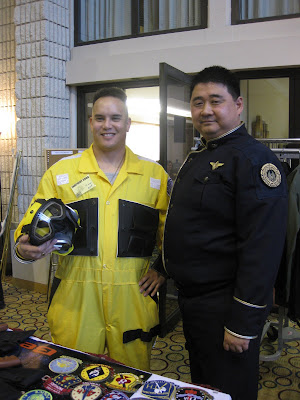 Every once in a while, I indulge myself.

This past weekend, instead of jetting off to Africa, I decided to stay home and hang out at the local science fiction convention (or "con" in geek parlance). If you've ever enjoyed sci-fi, then I think you'll find something to your liking at these events. Luckily, at least four of these cons are held in Baltimore - three of them are held within just a couple of miles from my house, which makes geeking it out cheap and easy.

Where else in the world can you go dressed in costume all day and not receive strange looks from people? Want to be a Klingon or anime character? No problem. Fancy yourself an Imperial Stormtrooper crushing the rebellion? It's easy - especially since Darth Vader is here too. Or maybe you imagine yourself jumping through the Stargate? You can go by yourself or join up with a group and make yourself a team. 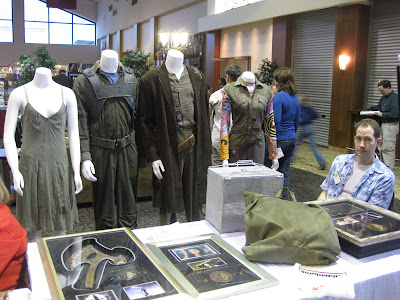 These are the actual costumes worn in the movie Serenity.

Cons such as this one (Farpoint) have discussion sessions, podcasts, art shows, autograph sessions, but if you really want to get the full con experience, you must attend the "masquerade." Truth be told, I've only been to one (Farpoint 2006) but I'm told all of them are similar.

The masquerade is basically a big show where anyone and everyone gets their moment on stage to show off their costume. Appearing before you will be a spectacle of costuming. Some amazing and truly authentic, others not so much. The magic of it all is the enjoyment and camaraderie of those participating and in the audience. 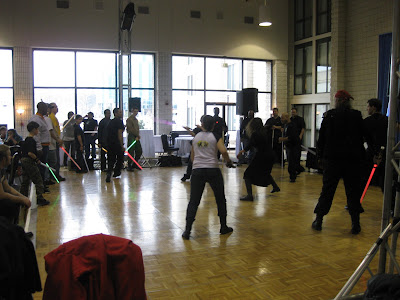 Yes, those people are fighting with light sabers.

But a con wouldn't be a con without the sessions. And here you'll find all sorts of topics for discussion. From The 4400 to Stargate to Browncoats bemoaning the demise of their beloved Firefly and of course, the staple of science fiction conventions: Star Trek, in all its' iterations.

Star Trek defined the genre and Star Trek is everywhere. Romulans, Vulcans, Klingons and Federation officers commingling. Second to Star Trek is Star Wars. With so many Stormtroopers about, you'd think the Emperor dispatched a Battalion expecting the Rebel Alliance to show up. 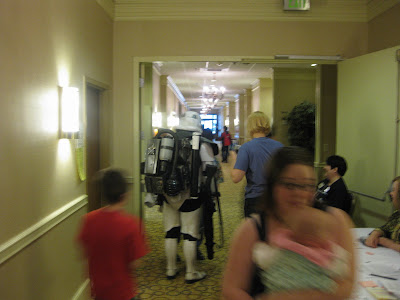 Act up and you'll be questioned by Stormtroopers.

While I grew up on Star Wars and tremendously enjoyed Firefly and Star Trek Voyager, I'm really here for Battlestar Galactica. Problem is, the number of people at these cons who are dedicated to Galactica always seem underrepresented. I don't know if Galactica attracts a more "mature" audience that doesn't go for the sci-fi con thing, or if the show is too serious and without the proper camp and fun that shows such as Stargate showcase, but the ranks of Galactica people compared to the rest is pretty small.

Usually, I come to these events to buy some patches, pins and maybe a prop or two. This time, I ran into some people who not only were Galactica fans but they had the uniforms to prove it. Fantastic. Yellow deck gang uniforms, green BDUs and blue dress uniforms. Very cool indeed. And all I had was my simple BSG grey sweatshirt. Time to get rolling on my costume for DragonCon. 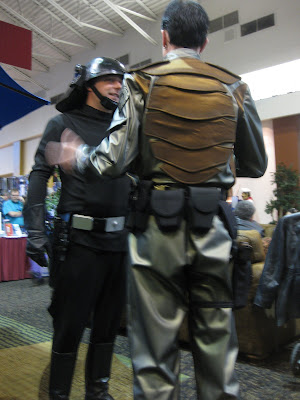 Now, I don't mean to disparage anyone, but at these sci-fi cons you'll find the people that you would typically associate with sci-fi. Geeky types who don't quite fit in. This is their domain. But, these are the people you expect to find here. The ones I find most surprising are the people who don't fit the achetypical sci-fi mold. Like this couple in later Star Trek uniforms. They were pretty normal people. Older, mature - if it weren't for the Federation uniforms you would have thought this couple to be from the average suburban-dwelling, SUV driving, private school set. Their uniforms were authentically correct and of great quality. A happy couple that enjoys dressing up and going to a sci-fi con - that that is fantasy!

Maybe I can find me a woman like that... 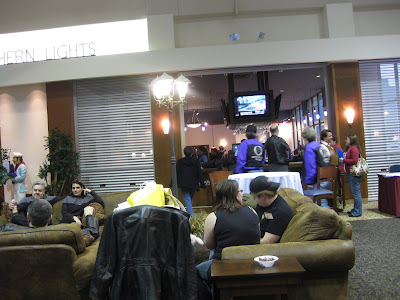 Even sci-fi people love a good bar. Check out the couple on the left. They had the coolest Star Trek uniforms.
Posted by onocoffee at 11:27 AM 2 comments: Links to this post