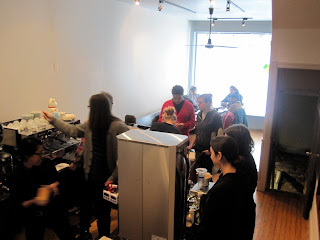 Lately Saturday mornings at project hampden have come to mean brewing drills and coffee service. Anyone finding themselves in the vicinity of project hampden have been invited via Facebook (and the evil Twitter) to stop by and have a coffee on us. With the espresso machine finally installed and (most) of the plumbing completed, we're ready, willing and able to rock-n-roll with most of the drink menu.

Whether it's Aeropress, French Press, Clever, Chemex, Vac Pot, Eva Solo, Pour Over or espresso, cappuccino or latte you crave, project hampden is ready to deliver. 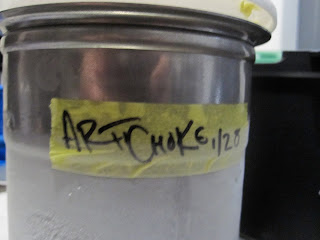 The basic drill goes like this: the crew breaks up into teams of three or four and the rest act as customers ordering coffee. Of course, the friends who find their way here are tossed into the mix. The "rush" lasts about fifteen minutes and then the team can concentrate on getting all the drinks out. It's a decent way of conditioning the teams for service, but I'm concerned that the narrow "rush" window is inadequate. What we're doing with project hampden is unprecedented: six coffees and seven brewing methods - all done by hand, to order, a la minute and by the cup.

In the drills, the person designated at the register takes the orders then passes them on to the rest of the team. Once that person has taken all the orders, she can then help the others completing those orders. But in a sustained rush, with real customers on a time schedule, that luxury disappears. The only way to test their ability to deal with a sustained rush is to open and wait for the tidal wave to hit. 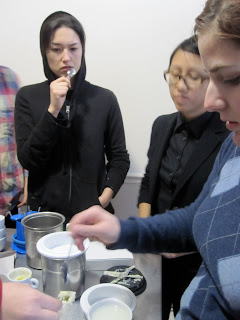 Meanwhile, we had some beakers freezing at Anisha's since our freezers haven't arrived yet. Thursday nigh, Lindsay whipped up some tests of Chocolate Ice Cream, Brown Sugar & Cinnamon Ice Cream and Artichoke Sorbet. After 24 hours in a deep freeze, they're ready to play.

First up was the Artichoke Sorbet. Crazy strange. And the texture was too powdery. Needs work. Brown Sugar & Cinnamon had too much sugar and was loose and runny after being "Pacotized." And while the Chocolate whipped into a luscious looking cream, it was both too airy and too fatty and didn't have the proper ice cream texture. More like a thick, smooth semi-freddo mousse than a proper ice cream. 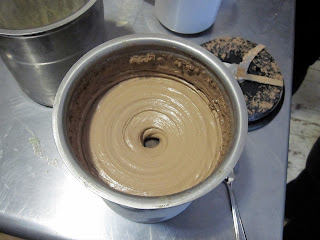 Certainly, none of the three tests were ready for the menu but they were a step in the right direction. From my readings, the formulation for PacoJet ice cream is a bit different than one you would toss into a batch freezer. Tighter control of the fats, for one. More experimentation is sure to come.

But where else in the coffee business do you get your hair and makeup done for a photo shoot one day, then eat ice cream all day the next? 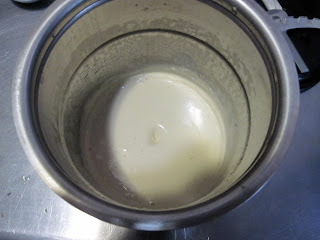 Brown Sugar and Cinnamon ice cream.
Posted by onocoffee at 10:35 PM No comments: Links to this post