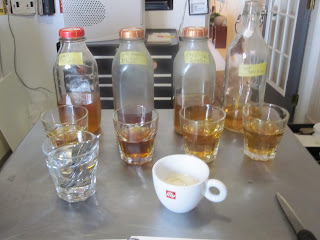 We've received a shipment of Cascara from Finca Mauritania this week at Spro and we're trying to figure out what to do with it.

Cascara is the outer hull of the coffee cherry that has been washed and allowed to dry out in the sun (presumably). And since, at some point in time, humans like to put just about everything in their mouths (to see whether or not it will kill them), someone came up with the idea of drying out what has been traditionally discarded for compost, steeping it in water and drinking it.

Luckily (for that person), the resultant "tea" wasn't poisonous and a new revenue stream was discovered.

Cascara has the potential to be sweet and fruity, but handled improperly it becomes tannic and bitter. So we're trying to see just how we can bring this to our menu in a positive way (meaning: eliminating the tannins and bitters). Hot brew, cold brew, multiple hot brews, mixing hot brews - it's all very un-scientific but yields (sometimes) tasty and highly caffeinated results.

Speaking of caffeine, there will be no "decaf" Cascara for the foreseeable future.