More From "The Kitchen" 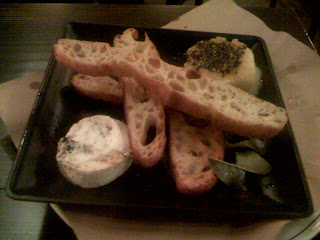 Here's another snapshot from the crew at Woodberry Kitchen for our family member living out there in Ireland. How's it going, Chris?
Posted by onocoffee at 11:09 PM No comments: 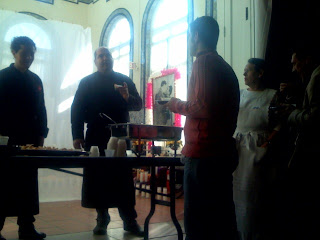 The son-in-law (center) waxes poetic, while Chef Ramirez (in white) watches on.

Readers of this blog might remember my visit to El Bajio with Ana and Tia Cristy back in September. While they're known for other dishes, I found their chilaquiles to be spectacular and a style that I've been trying to recreate ever since. It's a wonderful restaurant whose menu I hope to explore a bit more on my next visit to the DF.

How pleased I was to receive an email from Jeff of Southern Skies Coffee informing me that Chef Ramirez would be giving a cooking demonstration this morning at the Mexican Cultural Institute in Washington DC. So, in spite of waiting until 1:30 in the morning to chat with Ana, I rousted myself out of bed at 6am to begin the long journey down to DC.

After a forty minute commute down to Baltimore's Penn Station, a fifty minute train ride on Amtrak, a 25 minute ride on The Metro (including a train malfunction and two train changes), and a ten minute walk, I arrived at the Cultural Institute just a few minutes shy of the 10am scheduled time. But in true Mexican style, the session would start fashionably late. When I arrived at 9:50am, I was the lone attendee. However, by the time they started, there were about 30 people in the beautifully ornate hall.

The session was led by Carmen Titita Ramirez Degollado, chef and owner of El Bajio, her youngest daughter Maria (a chef who attended CCA in San Francisco) and Maria's husband (also a chef, hailing from Spain).

Surrounded by wood cutting boards, butane burners, glass jugs of agua fresca and mounds of fresh ingredients, Chef Ramirez went to town. First, she started off showing how to make Almendrado, a mole made from almonds, onion and garlic. The second demonstration was on how to make Mole Verde using a wide assortment of greens.

Surprisingly, the preparations were simple and looked relatively easy. I've heard stories about Mexican abuelas spending days grinding and preparing mole. Because of those stories, an attempt at mole always seemed daunting, at best.

I still have to pour through my notes, but here's the best I can do at the moment: the Almendrado consisted simply of almonds, ancho chiles, onions and garlic. Roast the almonds and chiles, saute the onions and garlic, then combine in a blender until pureed. "Re-fry" in oil and it's done. 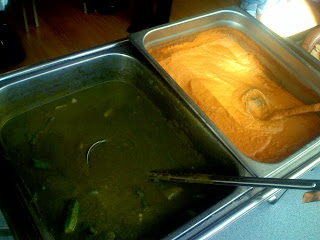 The Mole Verde on the left and the Almendrado on the right.

The Mole Verde was similarly simple: cilantro, hoja santa, epazote, hoja de chayote, chile poblano, chile jalapeno, chayote, green beans, peas, zucchini, green fava beans, white onion and garlic. Blend the onions and garlic together with some water, into a pot. Blend the leafy veggies, then into the pot. Heat it up and simmer with the chopped veggies and you're good to go.

Of course, it's slightly more involved than that. They didn't talk proportions or measurements so it's going to be a trial and error kind of approach over the next few days.

The flavors (to me) were new and interesting. I thought they could use a bit more salt to give the flavors better pronunciation, but it sparked my interest and I'll have to start making my shopping list for the weekend soon.

But if you're in the DC area (or willing to drive down to DC), then get to Oyamel before Friday to catch Chef Ramirez's cooking in honor of Mexico's Dia de los Muertos.

I'll be there tonight!
Posted by onocoffee at 3:51 PM No comments: