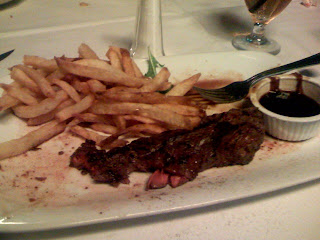 They say that all good things must come to an end.

For the past five and a half years, I've been keeping a mistress. A not so secret mistress. Sixty-six months. And now it looks as though it will have to end.

That mistress has been my steady companion through thick and thin. Feast and famine. Friends and foes. Good times and bad. After such a long time, it's tough to let it go. But let it go I must.

CapitolSwell and I went down to Les Halles last night for a typical outing in DC. The air was cool but very comfortable to sit outside. The patio was crowded and we ordered some of our usual dishes: macaroni and cheese, steak tartare and the favorite, onglet a l'echalote.

Usually this is a meal to get excited over, but this time things fell flat. We discussed this over dinner. Was there a problem with the food? Does it taste different? I don't think so, but maybe it does. Whatever the case, the food was different to me. It wasn't that rich burst of flavor, those wonderful textures. Okay, maybe there was a bit too much proscuitto and bacon in the mac 'n cheese and maybe we were spoiled about a year ago when they ran out of baguettes and had to bake some fresh. But there was more to it than that - even the onglet was flat.

A few months ago, we dragged Spike down to Les Halles and you could tell afterwards that he wasn't thrilled. I didn't understand then but I think now, I do.

After pondering just why the food wasn't as good as before all the way home, overnight and throughout the day, I finally came to realize just what had happened. Les Halles hadn't changed. They still offered the same French brasserie fare I came to love many years ago and still did that food consistently. The difference was that I had changed. My understanding and expectations of food had changed. I have been eating better quality foods and my body could now discern the difference and it was ruining my relationship with my favorite restaurant.

But one just cannot go back. I've tasted new delights and am now ruined forever. How can one go back to commercial, corn-fed meats after romancing grass-fed, free-range? It's impossible.

And so I now must bid a fond, if reluctant adieu to my longtime mistress, Les Halles.

I now face a Brave New World...
Posted by onocoffee at 11:31 AM No comments: Links to this post