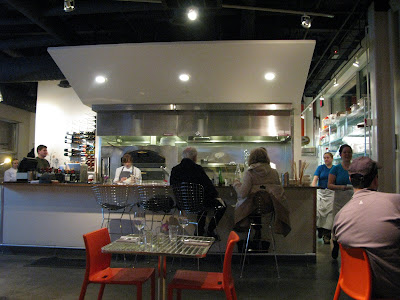 Kitchen as theatre at The Dinette.

Ask "in the know" Pittsburgh people where to go for great food and The Dinette is a new choice amongst a surprising number in this old steel city.

Just don't ask them how to find it. 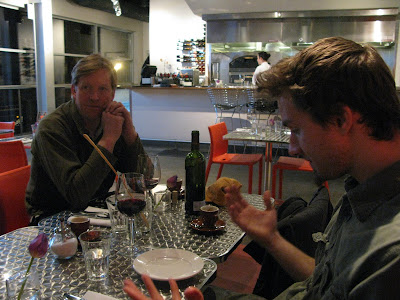 There we were. Myself and Troy Reynard (owner of Cosmic Cup Coffee), in our own vehicles, following Rich Westerfields' (owner of Aldo Coffee) Volvo in circles around Penn Circle. Around and around we went. Somewhere in the north part of the circle is this darned Dinette. It was getting late, we were hungry and the Dinette is supposed to close at 11pm. It was 10:37. Crap. C'mon!

Punch in the name into my trusty iPhone and we've got an address. Okay, we find the address but can't find the restaurant. Where is this damned place? There's a Whole Foods, a Borders Books and that's about it. The address is right, but no Dinette. 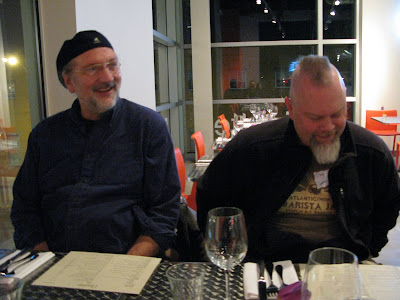 A quick query to a girl walking to her car points us to the upper deck of this multi-level shopping complex. We kick it into gear and drive up the ramp to find more shops but still no Dinette. WTF? We park anyway.

Good thing we did, because as soon as we get out of the cars and start asking ourselves where this place is, we see it. It's right there, with a big white neon sign reading "Dinette." Finally! 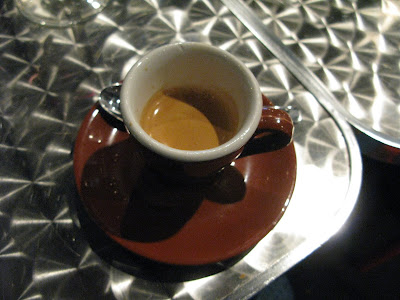 The night before we had been turned away from Bona Terra because we got there too close to the kitchen closing (9:30p), I didn't want to be turned away from the Dinette tonight. As we entered, I noticed some of the line cooks wrapping their hotel pans in plastic wrap (that usually doesn't bode well), but they were more than happy to accommodate our table of five. 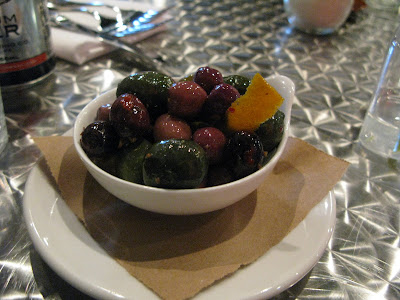 The Dinette is decidedly modern. It's bright, it's white, it's orange and filled with stainless. For whatever reason, it reminds me of the Top Chef Cookbook, or maybe what the Mode Magazine kitchen would look like on Ugly Betty. Either way, it's hip, cool and comfortable.

Sometimes you wonder if these kinds of hip and happening places are just going to hit you with more hipster pretense and attitude. I get enough of that in the coffee world, I certainly don't need it when I go out to eat. Luckily, our server is cool, friendly and helpful. There's no pretense or attitude here. 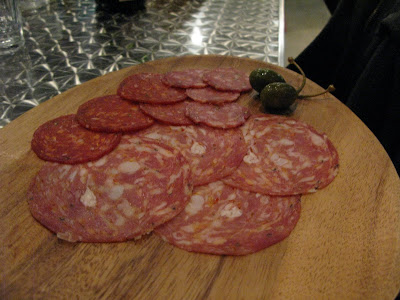 Spike and Isaiah arrive from the airport and it's time to get down to business. While Spike ponders the wine list, eventually selecting the 2005 Irouleguy from Domaine Etxegaraya in France, Isaiah pays homage to the coffee professionals by ordering a round of espressos for the entire table. It's a sincere gesture but the espresso is a bit flat. 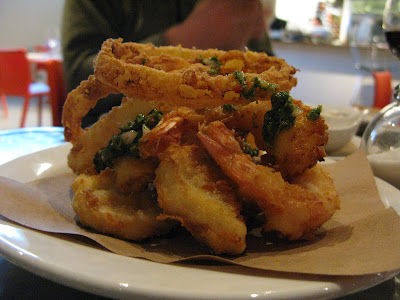 The beauty of going out to eat with like-minded friends is that you can order an entire menu's worth of food, everyone can have a taste and no one needs to leave feeling bloated. Mind you, I said "like-minded friends" because I have friends that aren't into the "let's share and taste everything" meal plan. To be honest, eating just isn't as fun with those friends.

At least they're not as bad as some people. I've seen an entire table of diners at Chinese restaurants each ordering the House Special Fried Rice as though it were a meal. Odd. 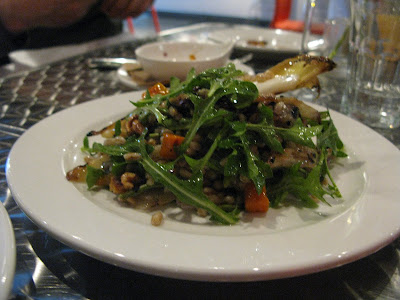 Happily, our group of coffee and food professionals are game for just about anything and the madness begins. So much on this menu looks so tasty. How does one limit themselves to a starter and a main? It seems inhumane. 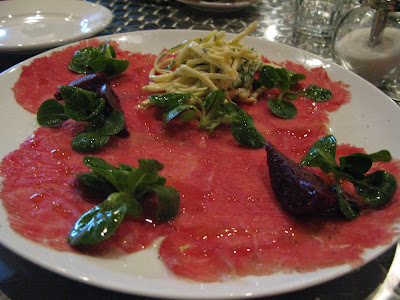 Straightaway we're firing off our entry round, but not before our server tells us that they are out of the steamed mussels. Dammit, we're leaving!

Well, maybe not. I don't think we can hack another night of Primanti Brothers again. 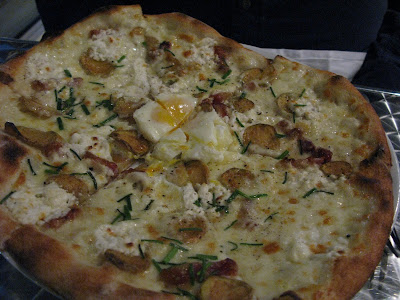 First up are the Marinated Olives. Truth be told, I've never liked olives. I always thought they were gross and disgusting. But over the past two years, I've come to really enjoy them. I can now eat them like candy. These olives are lightly dressed in oil and are of several varieties - though I'm not versed enough to tell you the difference. They range from very salty to lightly salty but all full of flavor. I'm discovering though that I enjoy the thick, green olives that you bite partially because they're so big. They've got a meaty texture that I love and a light saltiness to them. Give me more. 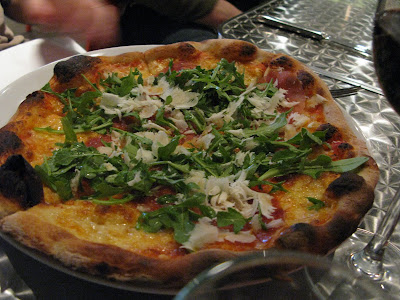 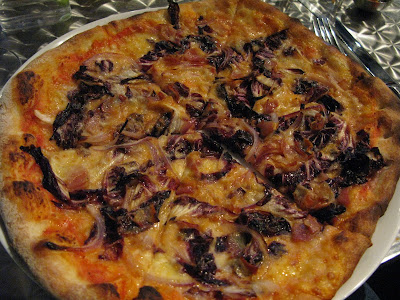 The mixed salumi plate arrives and it's nicely done. Evidently, the salumi is prepared by a local butcher. I like dried, cured and salted meats. I don't know which is which but they are tasty.

Fritto Misto is an interesting dish. One that I've had at various restaurants across America and it's always interesting to taste the interpretations. Dinette's version is lightly battered, crispy and light. The cauliflower is cut like cakes and I dig them. It's like Italian style tempura. 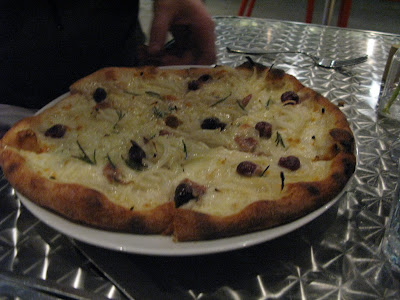 Each of us ordered our own pizzas. Rich hit it off right away with his choice of the Fingerlings pizza with egg. Darn it, I love eggs on my pizza, but I didn't want to order the same thing. Our server suggested the Radicchio pizza instead. Could I have that with an egg? No, the chef doesn't allow compromises to her food. Damn, I like this place already.

The beef carpaccio and farro salad arrived, both were really well done. There's something strangely odd about the farro that I really like. Grains and veggies, I dig it. 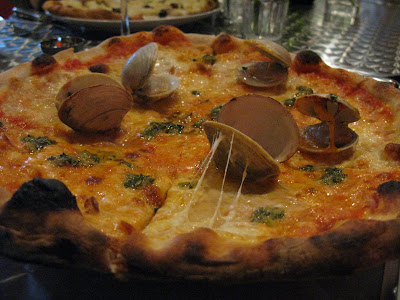 We went whole hog. Soon the pizzas were flowing to the table in an endless stream of crispy dough and a variety of toppings. Since there were so many pizzas and so many of us, we just passed everything around, letting everyone have a slice (or two) of each pizza. Nothing was mediocre. All of it was delicious. My radicchio was delicious with the flavors of the cheese offset by the mild bitterness of the radicchio. Rich's egg pizza was luxurious. And I just loved the clams on Troy's pizza.

We ate, and ate, and drank and drank. Five pizzas and four bottles of wine. By the end of the meal, we were quite happy indeed. The food was great. The staff was great. It was just a fun time.

Then we headed to the Sharp Edge for more consumption. Not good. 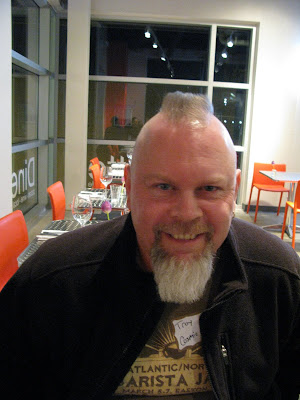 Troy ready to continue the onslaught at Sharp Edge.