Firing and The Big Foam 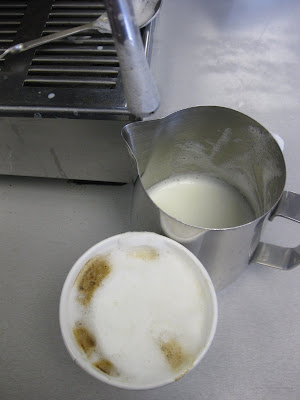 With the impending doom of opening project hampden, I've fallen upon the task of shoring up the staff at The Spro in Towson and starting the search for qualified barista candidates.

To my mind, hiring is utter agony. It's one of the most difficult parts of the job. Hire poorly and you might as well shove a shiv in your neck. Hire well and life can be very good indeed.

Over the years, I've hired and employed over a hundred people - each one I vetted personally. I'm happy to report that I've only fired one employee with prejudice in ten years. Some left of their own volition and others were excused during their training phase but only one was truly fired outright.

In 2002, I hired this person whom I didn't entirely vet out. I hired the person because some on my staff thought we could use this person - to be clear: a bunch of my girls wanted to bring on a guy and campaigned hard for me to hire this person. Against my better judgment, I brought him onboard. From the get go, it was clear he was the wrong person for the job. Within a week he thought he was the new hot shot on the team: the star player.

Firing someone is one of the most unpleasant tasks of my job. I don't enjoy doing it. It's physically wrenching. It's not something that I want to do. But it is something I will do when the time comes.

And that time was fast-approaching.

After two weeks, many of my staff were unhappy with this person. They wanted him out. I agreed. He had to go, but firing is very unpleasant and I wanted to put it off as long as possible. I decided to have a cigar to think it through.

As I sat at my friends' shop smoking that cigar, things became very clear. I could put off firing him and risk alienating my crew, which could result in my best people leaving, or I could go down there that morning and fire the person and be done with it. Losing my best people and being stuck with some lame-ass, showboat, hot dogger was about the worst possibility there could be.

I dropped my cigar, drove to Jays Shave Ice and fired him on the spot.

In spite of that glitch in 2002, I've always taken hiring very seriously. Especially since I don't want to get stuck with a non-performer like that again. From time to time, other operators ask me my methods for hiring and they've changed quite a bit. Once upon a time, we had very formal interview and vetting standards. Lately, they've been much more organic and dynamic.

But one component of the interview process that hasn't changed is when a candidate has prior barista experience (not superauto experience), I'll throw them on the machine and let them make me a cappuccino. The cappuccino they make is whatever they are used to making and know how to make. I just point them in the general direction of the milk, the grinder and steam wand and let them go to town.

Perhaps years ago, I would have been horrified to see what I've been seeing lately. But in my old age, I've come to accept the world as it is and accept that perhaps baristas around the world just aren't up to the same standard that we perform. It's okay because I just want to see what I have to work with and where we need to focus should they make it to the training phase.

Whatever the case, watching the candidates perform is always entertaining and informative. For example, I never really understood how people were able to create that super dry and thick milk foam. I knew they pumped but wow - seeing it live and in person was something else entirely.

Now I know what I'm missing...
Posted by onocoffee at 8:24 AM No comments: Links to this post