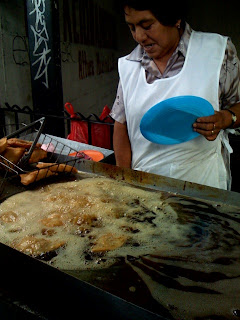 I've only been in Mexico City for about four hours and already it feels like I've done it all.

Ana came to pick me up at the airport with her aunt. The aunt can't speak English and I can barely manage a hello in Spanish but she's a jovial lady who's constantly laughing which is always fun - especially as we crawl in traffic through this sprawling megalopolis.

As we make our way through the city, I realize that I have no idea where we are in relation to anything I've seen on any map. We could be thirty miles from the airport or three hundred yards, I just don't know where we are but the sights are amazing. So many things about this city, from the interior design, to the architecture, to the roadways and to the street vendors remind me of life in Manila. It's a foreign country for sure, but it's strangely comfortable. Many people say it's one of the most dangerous cities in the world, and since it's the second largest, I believe it.

Regardless of the danger, there seems to be little concern for driving around with the windows down...

After a brief stop at one of Ana's cafes, we head to pick up her mom and then to the supermercado to do a little grocery shopping. The store is huge and it's like one of those SuperWal*Marts that has everything else in addition to groceries. Of course, the food captures my attention. The diversity of ingredients that I've never seen in the United States in amazing. I'm fascinated. I want to shop. I want to try out a wide swath of stuff they have here. From the fresh peppers and nopales to the amazing assortment of cheeses, like the Queso de Oaxaca. I make a mental note to come back and shop.

After our excursion, mom and aunt are ready for a snack and want to know if I'd like to try quesadillas, little do these women know that I'll try just about anything. We stop in front of the supermarket at an empanada stand and they recommend the jamon y queso "quesadilla".

Being Filipino, I'm very intimate with empanadas - that little pie filled with assorted meats and veggies. And while I like them in general, I'm a fan of the deep-fried empanadas and this lady's got a small vat filled with boiling fat, and I love her for it. 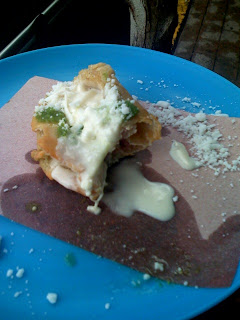 The evidence of sheer eating glory.

As Ana orders, she grabs a few from the pan of fresh next her and drops them in the hot oil. It boils angrily and I'm excited. Once golden brown, she pulls them out with tongs and cuts them lengwise to expose the filling and allow you to add your choice of queso blanco, crema, salsa verde y salsa roja. I go for the crema, blanco and verde.

As I bit into the empanada, it's amazing. The corn based crust is perfectly fried to an outer crisp while still being tender on the inside. The queso and jamon have melted together into brilliance and the shredded cheese, crema and salsa verde add a light punch while smoothening it out.

Ana's mom and aunt ask if I want more, but I decline. Of course, I want more. Heck, I could eat four of them, but I don't want to put a bad (read:proper) impression only a couple hours after meeting.

But I still don't understand why she calls them "quesadillas", I'll have to find out later.
Posted by onocoffee at 6:16 PM 6 comments: 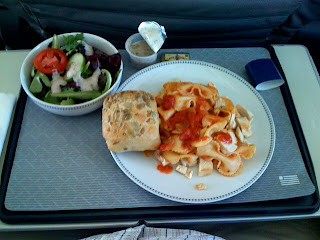 The "Pasta with Chicken" meal in US829's First Class.

Okay, I'll admit it. After my return trip from Tokyo in United's Business Class, I feel spoiled. And I like feeling spoiled. So when the opportunity to upgrade on USAirways for my trip to Mexico City, I took it. Wide leather seats with power supply for my iBook and with only five of the twelve seats occupied, what more could I ask for?

Well, it would be nice if USAirways extended use of their lounge to International First Class passengers. It would be nice if they treated this as an international flight in their interior design of First Class instead of just an extended domestic version. I spy those lucky first class victims on flights to Asia and Europe with their lie-flat suites (note: "suites" not "seats") and I long to be one of those people. Those people look refreshed and I suspect it's because they're getting a deep-tissue massage (or something like that) once those dark curtains have been closed.

This was going to be my time Behind The Green Door. I too was going to be one of The Chosen Ones. But alas, I might as well have been flying to Chicago with the barely reclining seats and no footrest. Hey, don't they know this is an "International" flight??? Don't you know who I am? You know who I'm with???

The experience was filled with juxtapositions. International means domestic. One of the worst airline meals I've ever endured was juxtaposed by the absolutely best bread I've ever had in the air.

Your choice of meals for your flight to Mexico City today is: a salad with chicken on top or pasta chicken. Hoping for something a bit filling, I opted for the pasta. It came as above with the small salad and a vinaigrette dressing. The salad was pretty good but the pasta was atrocious. The sauce was lifeless. I could have used salt. A lot of salt. The bowties were nice, when they were cooked. So many of them had dried tips that I thought I was eating pasta chips. The chicken was dead, dry and without flavor or remorse. That poor chicken endured a life in coop fighting disease and other horrors only to end up as this monstrocity 35,000 feet in the air. Pathetic and sad. 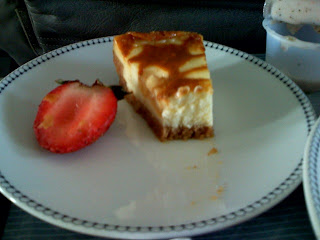 Cheesecake topped with caramel and strawberry.

Dessert was a caramel topped cheesecake with a slice of strawberry. The cake was moist, smooth and tasty. The strawberry was tart with a hint of sweetness. Overall, the dessert was pretty enjoyable.

But the true piece de resistance was the sunflower roll. It absolutely rocked. Crispy crust, warm and chewy interior. It was beautiful with butter. It was good. It was great. Compared with the chicken, it was decadence defined. So darn good, I used the privilege of First Class and ordered more. Our flight attendant heated one up fresh for me. Bless that lady.

The jump to Mexico City from Charlotte was short - about 3.3 hours. Time flew by and before I knew it, we had crossed the Gulf of Mexico and were landing in the world's second largest metropolis and onward to new adventures. 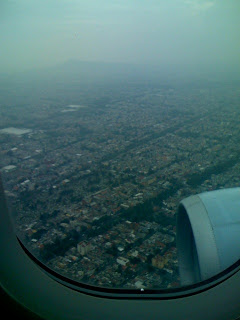 About to land and already thinking about mole enchiladas.