The Thin Side of Fries 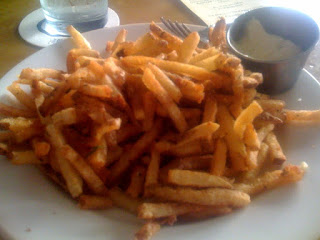 I can't recall how many people have told me over the years that Brewer's Art has "the best" French fries in Baltimore. They're to die for, or so I've been told. But for whatever reason, I just never find my way down there to try the fries myself. Until today.

With the spirit of the Best of Baltimore in the air and Brewer's Art once again winning the Best French Fries category, I made a point of it to stop there on the way home after the Mid-Atlantic Restaurant Expo at the convention center. I made a deal with myself that if I could easily find a parking spot on Charles Street (in the middle of rush hour), I would stop.

There was an open spot a half-block away and I had to make good on my promise.

I squeezed myself onto the end of the bar and since they make their own beer, I decided to try one - their Proletary Ale, a dark musty beer that was pretty good. I'm not really a beer connoisseur so you'll have to check it out and decide for yourself. It was similar to Murphy's Stout and lacked the creaminess of a Guinness.

The menu has a good selection of stuff and I'm tempted by the steak frites. Described as a grilled coulotte steak with fries, I have no idea what a "Coulotte Steak" is so I asked the friendly bartender. She said it was the end cut of a strip steak and very lean. For some reason, in my mind "lean," "steak" and "tasty" do not usually go together. I decided to go with a simple order of the Rosemary Garlic Fries and a Crab and Corn Salad. 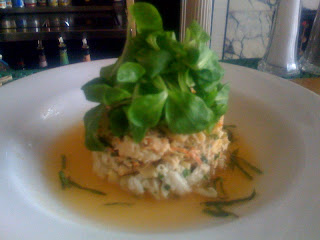 The salad was nice. Simple. Plain. Squeezed into a mold and topped with rocket greens. Not bad. Not much corn so the flavor was lost but there was ample crab but I think it needed something to make it pop. Salt and some lemon juice might be nice.

After a few moments the fries that everyone raves about arrived. They give you a good amount. Really thin fries that are blanched and then finish fried with rosemary, garlic and salt, served with a side of mayonnaise. Time for the big moment.

To be honest, I'm not a fan. First off, I really don't have an appreciation for really thin french fries. Thinner than McDonald's, these are almost the same thinness as those Durkee french fries you buy at the grocery store in the can - and nearly the same in texture and oil content. The rosemary is nice and I think there's garlic in there somewhere but fries of this size just don't hold up. They're too thin to hold temperature for very long and quickly, my fries had gotten cold. Not to mention that I found my fries to be a bit on the greasy/oily side.

I think part of the problem is that the thinness of the fries allows it to cook through too quickly, creating fries that are more crisp and crunch rather than a balance between the crisp exterior and the steamed creamy potato on the inside. These fries really were closer to Durkee than anything else. And I'm just not a fan of mayonnaise with my fries. It really does nothing for them - just adds more fat.

Perhaps I also just don't have an appreciation for beer. I'll drink it from time to time but I don't love it. A number of people have said that these fries are the perfect accompaniment to beer and I have to disagree. There's so much oil and fat going on that you need something acidic to cut through it all and cleanse the palate. And the only thing that will suffice is Coke. Let Coca-Cola's phosphoric acid cut right through all that oiliness.

For the record, I prefer a thicker cut of fries a la Brasserie Les Halles in Washington DC. They've got the recipe down. I want that balance of crisp exterior and soft, creamy interior. Add some salt and what else do you need? Nothing. It's just beautiful, potato goodness.

I wish more places would perfect the basics before adding all sorts of whims of flight and fancy. 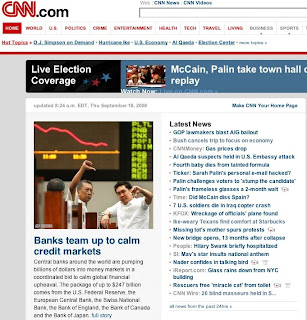 Democrats still have a serious problem on their hands.

A day closer to the election is dawning and still no sign of Obama in the media. This morning's CNN.com Front Page mentions either McCain or Palin in at least five separate pieces but not a word on Obama.

We're looking for coverage on Obama, but we're not seeing any...
Posted by onocoffee at 9:07 AM No comments: Links to this post