Love In The Time Of Cholera 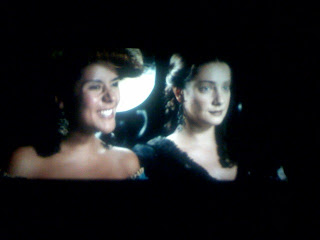 After arriving from Los Angeles today, I rushed out to the movies to see Love In The Time of Cholera, the tale of two lovers and their fifty-one year journey to be together. I had just finished Gabriel Garcia Marquez's book on the flight home so the timing was perfect. Perhaps I was a bit tired to go to the movies, but I refuse to watch movies on the weekends and since the theatre was only screening the film at 10:20pm and new movies were opening tomorrow (it was Thursday night), I figured chances were good they were going to pull the film and I wouldn't get to see it.

I arrived to an absolutely empty theater about fifteen minutes prior to the scheduled time, and it stayed empty. It was like my own private screening. It was beautiful. If I had brought a girl along with me, who knows what kind of trouble we could have gotten into. It's one thing to make out at the movies, but a private screening opens up so many more possibilities. God must know my nefarious ways and that's why he's conspired to place such distance between me and Mexico City.

It would be redundant to go into details about the film and give my "review" but I enjoyed it. It stayed relatively true to the book, even though it did take some large liberties and it was unfortunate that so much of the exposition in the book that gave so much life an texture to the story were unable to be captured in the film. Of course, there's only two hours so it's tough.

I just hope that I won't have to wait 51 years, 9 months and 4 days before I can declare my love again like Florentino Ariza...
Posted by onocoffee at 10:16 AM No comments: