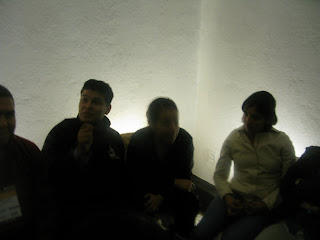 Salvador, Aleli and Ileana at the party.

Every good barista competition has to have a barista party. It's de rigeur and CMB hosts Arturo Hernandez and Cleofas Arreola know how to have a good time. They've set us up in a the beautiful home of their friend and caterer who produced a tasty Japanese-inspired buffet and open bar (read: tequila abuse).

Unlike some barista parties I've attended, the CMB is small and by invitation only. Only barista competitors, their friends and judges are invited - and you must bring the printed invite because there's a doorman. While it makes for a more intimate gathering, it's so much easier to sit down, chat with new friends and talk story and drink tequila all evening. Other, more lavish (and larger) affairs are so huge that the competitors are lost in the crowd and it's just a big party and you spend half the night just searching for the person you'd like to chat with. Then, by the time you've found each other, it's so loud that you can't talk - not to mention that the food is gone in the first 45 minutes because they've opened the doors and allowed the entire city into the party. 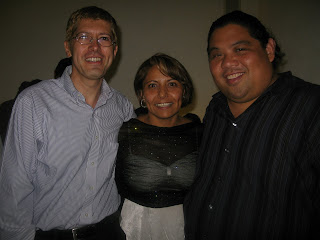 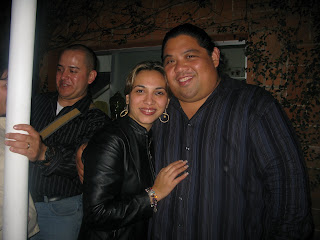 With Samantha Espinosa from Cordoba, Veracruz. 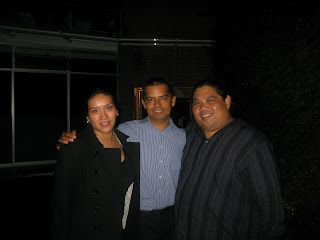 The Pancake Maker: Alvaro Carrasco and his esposa. 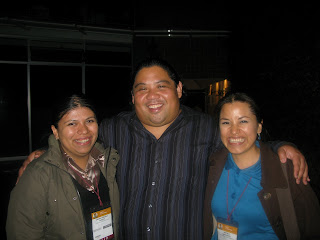 Diana Sanchez and Brenda Hernandez from The Lord of Coffee. 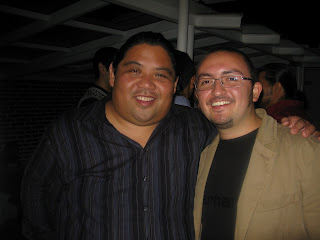 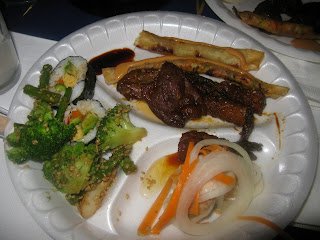 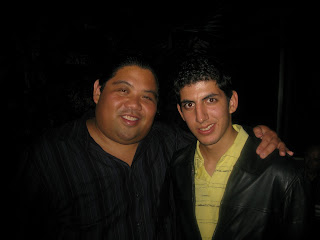 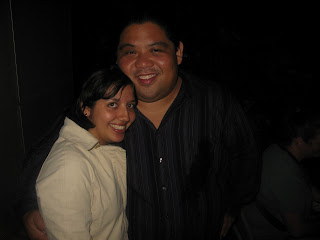 His sister, Ileana...
Posted by onocoffee at 11:59 PM No comments: Links to this post 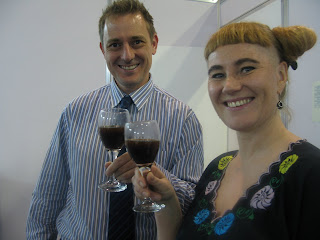 
Imagine yourself standing on the stage of Bright Lights, Big City, facing an audience of thousands both in front of you and across the Internet. The tension is palpable. You've spent months and months developing your skills, figuring out a signature drink and rehearsing your performance over and over.

You've experienced the joy and exhilaration of making it into the finals, past thirty of your peers. It's now down to the final six in a winner takes all battle to the death. The action is fast. It's furious. Half point assessments separates you from the losers. This is your time to shine. And then you pass out because you're so overcome with joy the moment the 2nd place finisher is announced. 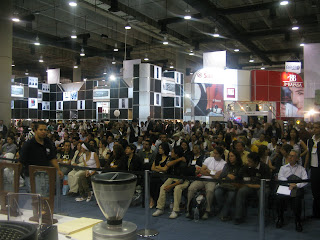 The finals audience at the CMB. It was always this packed.

By now, I've been involved with quite a few barista competitions around the world and I've never experienced anything quite like the CMB - the Competencia Mexicana de Baristas.

As a Finals Technical Judge, I knew the score. Based solely on technicals, I knew who would be named winner. The difference between first and second was razor thin, but I knew. First and Second were trained by the two time Campeon de Mexico and they were tough.

Monster, I thought as I watched her technique. There was nothing out of place. Near perfection in dosing and distribution. Her tamping routine rattled off like a Marine drill sergeant. It never changed. While some baristas wasted up to one gram per dose, she lost nothing. Flawless. 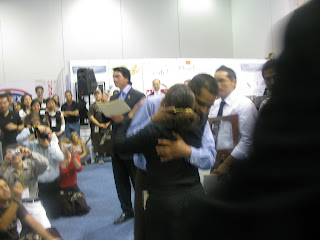 Alvaro and Aleli as they announce the third place finisher.

How does one score flawless? With a perfect score of six? I couldn't give her a six. What if someone came up later with even better technique? I'd have nowhere to go. Five point five it would have to be.

The second place finisher was equally as impressive. Smooth, calm, comfortable. He managed not only to produce the usual three flights of espresso drinks, but whipped up some fresh pancakes to go along with his signature drink. Impressive.

He was good. Damn good. Really Damn Good. But he wasn't her equal. There were twelve coffee grounds on the table next to his grinder at the start. He hadn't stuck his polishing cloth in the crevice where the handle is welded to the steam pitcher. He lost maybe .5 gram of coffee more. Lots of five point five scores, but a few five point zeros. And that was the difference that made the difference.

Add up a few half points and suddenly the winner is walking away with five thousand pesos, a two-group Bezzera espresso machine, a Compak K-10 grinder, a Reg Barber Tamper, a large trophy and a trip to Atlanta in April 2009 to compete in the World Barista Championship.

I knew the score. 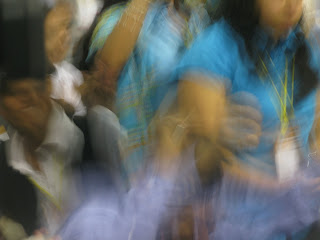 
As I stood on stage as Cleofas was announcing the order of the finalists, I pulled out my camera and trained in on Salvador Benitez, who was sitting in the front row hoping for the best. What he was about to receive was something none of us could have expected.

The CMB is the first barista competition to be held under the new August 15, 2008 WBC Rules. A number of changes, large and small have been made. Competitors no longer have to serve all four drinks at the same time. Archaic scores for "Understands Grinder" have been eliminated for the comprehensive "Station Management" score. On the sensory side, the "Judge's Total Impression" is an overview of the barista's skills, taste of beverages and presentation. With a score multiplier, its' potential 24 96 cumulative points can make or break a champion.

The CMB is also the first national competition outside of the United States to offer the event live on the Internet. With a direct feed from the official website, people all across Mexico, North America and the world followed the events as they unfolded. None of them could have predicted what was to come next and I wonder what the stream of conversation was as the events played out.

Standings (as they were announced):

As the final two remained, I trained my camera on Salvador, who had trained both of the remaining competitors. Either way, his legacy as champion and now champion trainer was secure. The only question remaining was: which one?

Reg Barber showed me his string of photos that he shot as the 2nd place finisher was announced:

In Reg's images, an exuberant Alvaro raises his arms in celebration as a wave of joy and happiness washes over Aleli's face. As the three frames progress, you see her smile and joy grow, her head tilting back and by the end of the series, Aleli is falling out of frame.

From my camera's point of view, as Alvaro's name is announced, Salvador is jumping up and out of his seat to cheer, and then is suddenly leaping over the rope separating the audience from the stage.

It is at this point that pandemonium erupts.

Like the moment President Reagan was shot in 1981, it's a mass confusion. People are jumping up and over each other, scrambling towards the new champion. The audience is on their feet. Some are rushing the stage. Members of the press, cameras and cell phones are in a shooting frenzy. The video camera is flailing wildly about. Even the typically well-composed emcee Cleofas is at a loss for words. The champion is down.

Moments drag on like hours. What's going on? No one seems to know. People are yelling. They need help. Some are crying. A nurse and medical team rush into the middle of the fracas and work to restore the peace. In the middle of this, I notice that the on-screen video has switched to a logo and I wonder what the Internet feed looks like and the reaction of the viewers in the chat room.

It's a combination of exhaustion and exhilaration that caused the new champion to faint. After a few minutes, the medical team has done enough to move her from the stage. In about twenty minutes, she'll be back and on her feet looking exhausted, but happy. 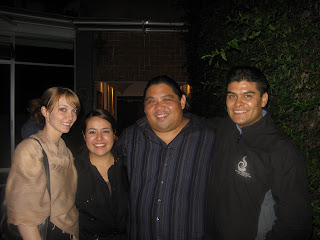 Anette and I with Aleli and Salvador - three years of Mexican Barista Champions.


The 2009 World Barista Championship Season has begun and Mexico has a new champion and perhaps the emergence of a barista dynasty. We'll have to wait until Atlanta in April to find out.
Posted by onocoffee at 10:59 PM No comments: Links to this post

Mexico City: The Hunt For Lunch 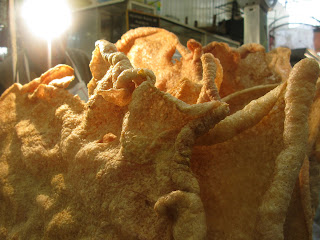 Sheets of warm chicharron to nourish the soul.

Our story today begins in the late morning as our intrepid crew piles back into the Chrysler Caravan Minivan for the quick trip to the Del Valle Mercado where we hope to visit and have a coffee at reigning Mexican barista champion Salvador Benitez' Cafe Passmar. The sun is out and the day is bright as we make our way past colorful vendors selling the red, white and green in celebration of the approaching Mexican Independence Day on September 16th. Independence Day here is when the entire nation seems to gather in the Zocalo and the Mexican President traditionally sings from the balcony.

It's 11:30am and the market is surprisingly quiet. A number of vendors are surprisingly closed. At first, I'm not totally 100% sure that Cafe Passmar is even in this market. All I know is what I've been told and what I've been told is that Passmar is in a market and that Salvador lives in Del Valle. It's a slight gamble, but checks out with a quick phone call to Sylvia. 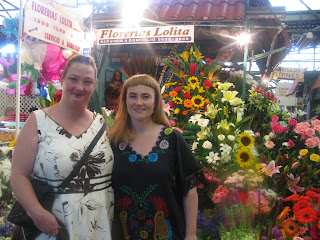 Sarah, Sonja and flowers at the Mercado Del Valle.

The mercado is like a Mexican Food Dream - vendors of all sorts selling just about everything you could need to make mole or fix your car. Fresh chickens, fresh tuna (the cactus fruit, not the fish), freshly ground mole paste in all sorts of colors. Over there is fresh calabasa flowers, to the left are large sheets of chicharron, down a bit are a complete assortment of chiles, or how about some pinatas? Of course, there's freshly boiled tripe, pig's heads and fresh hearts.

In a far corner, I spy a couple of guys hacking away at fresh pig quarters. It's a sight to warm the heart - until you notice the Swift brand cardboard boxes. American commercial pork in the mercados of Mexico City. NAFTA really is evil.

Along the way are quite a few food vendors selling cheeses, menudo and the whole assortment of Mexican cuisine. It's the kind of food that excites me but causes some stomachs in our party to shiver and we must press on. 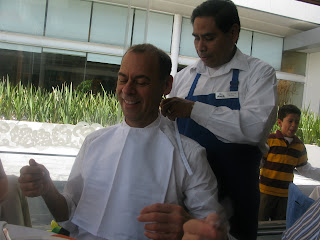 Andrew gets a bib.

After querying more than three vendors, whose directions I can barely understand, much less remember, I find a security guard who promptly tells me exactly where to find Passmar (down this aisle) but it's cerrado. Closed. Damn.

I don't know if they're simply closed on Saturdays or because Aleli is competing in the finals today. 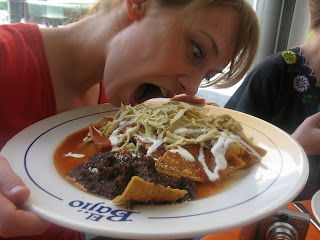 Undaunted and hungry, we make our way over to the Delta Parque Mall for lunch at one of my favorite Mexico City restaurants, El Bajio. I had come to believe that I wouldn't make it back here this trip so I was more than happy to persuade our group to eat here. Not surprisingly, it turns out that Sonja had also been to El Bajio on one of her previous visits. With fond memories of great food, we were on.

If you ever get down to Mexico City, I always recommend El Bajio. The food is traditional, originating from Oaxaca, and just delicious. For lunch, we had chilaquiles, nopales, huevos, enfrijoladas, tamal, and more. Andrew even got a complimentary bib to cover his judging tie. 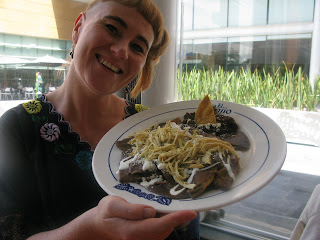 Sonja and her chilaquiles negro.


More on our trip to Mexico City:

Anette's Square Mile Blog.
Posted by onocoffee at 8:56 PM No comments: Links to this post