The Not So Big Tummy and The Angry Pozole 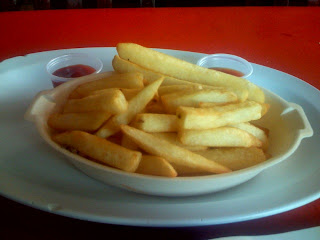 I was in Riverdale, Maryland today in search of Conchas. It's an exhausting search that makes one hungry and I figured that there must be something tasty in the area people call "Little Mexico."

Which is how I found my way to Taqueria Tres Reyes - driving along Kenilworth Road, spotting it to the left and hitting a U-turn to get there.

The setting is classic American Hispanic. About forty Hispanic (presumably Mexican) workers hanging out by the corner in what is growing to be an American ritual - hanging out until someone comes along to offer you daywork. At first, it's slightly unnerving, until you realize what's going on, then it's old hat.

Taqueria Tres Reyes is a down home kind of joint. It's nothing fancy. It looks like it used to be some other kind of fast-food eatery in a previous life - perhaps a drive-inn, perhaps a burger joint. Whatever the case may be, it's old and kinda rundown and the exhaust hoods in the kitchen look like they're from the 1930s. 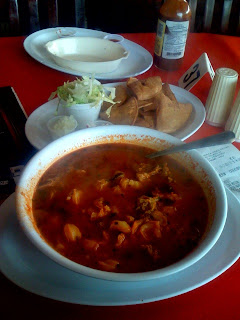 The Angry Pozole accompanied by some radishes and fried tortillas.

Of course, I'm not here to worry about the decor, which is Formica-chic, I'm here to try the food. But before anyone can eat the food, they have to experience the service, which is almost atrocious. Besides myself and the one white guy eating with some friends, everyone else is (presumably) Mexican, ranging from the rough and tumble general worker to pseudo-suburban type, but the girl behind the counter takes the cake.

She's curt, brash and I think she's also rude, but I can't be sure because she's speaking to me only in Spanish.

And my Spanish sucks.

But there's the attitude. The "hurry the fuck up and order you pinche puto" kind of attitude. And she's got it. In spades.

However, this is my world and she's just living in it so I'm not going to let her spoil the fun. The attitude? It's part of the flavor because, I notice later, she's rude to everyone. As she goes along asking me if I want ketchup with my fries or the order to here or to take my Coke now, I'm barely keeping up with her Spanish and make rudimentary "Si" to keep the pace. I also feign that I'm preoccupied with other things on my mind, which means I'm not really listening and it doesn't seem out of place that I don't understand her right away. Of course, the truth is that I'm paying close attention to what she's saying and it's taking me that long to recognize the words I do know and decipher the rest by filling in the blanks with wild guesses.

Finally, that pain is completed and I sit and wait. And wait. And wait. When I sit, the taqueria is pretty full and by the time my pozole arrives, I'll only be one of two people left. Not too long into my wait, the french fries arrive. They're the typical wide-cut, frozen Simplot kind of fries and while I find processed foods detestable, I can enjoy these fries since they're crisp. The ketchup provided as a side is cheap and watery but since I don't usually like ketchup on my fries, no worries. Hit them with a bit of salt and all is good. Not fantastic, mind you. But good.

After quite a bit longer, my fries are gone and I'm still waiting.

After still yet more time, my pozole arrives and it's angry. Unlike the pozole I've had at other places, this one is huge. I mean freakin' humongous. No wonder it costs nine dollars. It's huge but looks freshly made. The soup is a deep, angry red that's just off the boil which means it's searingly hot - the way a good soup should be served. After some careful sips, the broth is deep and rich. It's heavy on the chiles and the cumin which gives it that deep, smoky character. It's good. Damn good. Rich in a way I haven't experienced with pozole. The flavors are multilayered and so are the textures. The pork is soft and stringy while the rest of the bowl is chock full of hominy. Hominy that looks like it exploded. Any thicker with hominy and you might think you were eating a soupy Mexican bowl of grits. Chunky grits, that is.

Once the bowl has landed, I Thank The Lord that I didn't order a couple of tacos as a side dish. That would have been suicide. The bowl is too much. Way too much for this tummy to finish. I work and work on the dish. I'm sweating. I'm struggling. I'm huffing and puffing and it's blowing my doors down. I can't finish it. I am defeated by this angry pozole.

But it was good.