It's Chile In Maryland 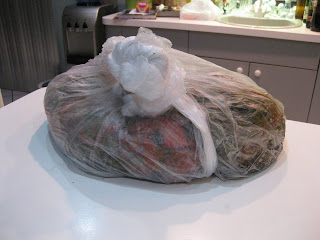 The 40lb. bag of roasted chiles.

Maybe it was a moment of haste. Heated haste, but I've done the impossible: brought home forty pounds of New Mexico's finest Hatch chiles for my personal consumption. The problem is: now I've got to process them.

And processing chiles is no small task. In fact, it's a real pain in the ass. As I break open the bags, the sweet aroma of roasted peppers fills my kitchen. Good thing I've got the space and the tools to process it all. It's slow going at first but after about ten minutes, I work myself into a rhythm and flow. 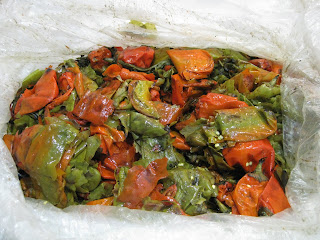 I'm skinning the peppers, then cutting off the stem, then squeezing the seeds out. Surprisingly enough, the seeds squeeze out of the pods quite easily. Just two fingers in a downward motion and viola! It's done. From there, I just separate the chiles by color and then lay them out on parchment paper to individually freeze.

It's not tough work, just a bit monotonous. Luckily, I've got the television to occupy my mind but it's the presidential debate between Obama and McCain and it's just a bit tiring. As I'm working the peppers, all I hear about is how either of the two is going to "Save The Economy" but no one's offering exactly how that's going to happen. Maybe it's magic. To my mind, things in America are going to get much, much worse. People will lose their homes. People will lose their jobs. It's going to get really, really bad before it gets any better, but none of these guys are saying that. 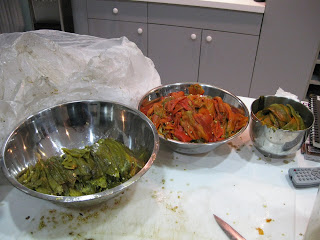 According to them, it's gonna be Love & Rockets if they get elected. Hello. Tell me that things are bad and they're gonna be worse. Paint me a horrible picture and then show me why you're the guy to be at the helm. Don't tell me stories about pulling us out of recession prematurely, or that you're going to tax only 5% of the population, or that you're going to bail out all these people who should never have overextended themselves in the first place. Without pain, how will our nation grow? How will out people learn that this excessive living is bad for us? At least those who survived the Depression understood the value of money. For us, it's just numbers on paper that don't really mean anything. 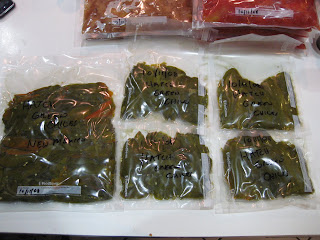 Turns out that the individually frozen chiles were less than successful. They're so watery that they freeze to the paper and to the other layers. You can't do to these chiles what you can do to blueberries. What a bummer. Instead, I thaw them slightly to release and then vac bag them in what I presume will be individual serving sizes for later.

Of course, I've never worked with Green Chiles before so I don't know what to expect, but I look forward to a year of spiciness.


Oh, and here's some more of the stuff from El Modelo: 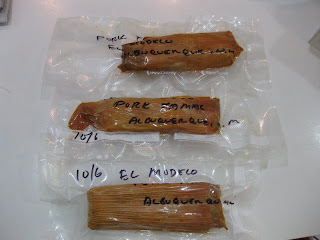 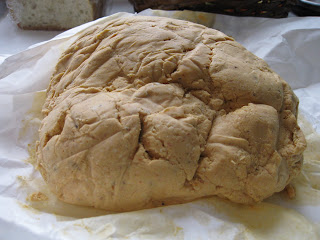 Two pounds of corn masa from El Modelo.
Posted by onocoffee at 5:46 PM No comments: