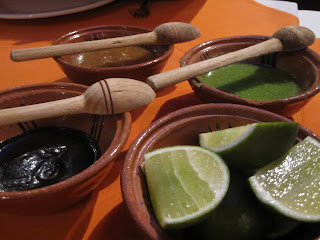 Ever since my very first visit to El Bajio nearly four years ago, I've been kind of obsessed. I was so moved by her cuisine that when Carmen Titita Ramirez came to Washington, D.C., I had to go and listen to her speak.

The woman is a tour de force of Mexican cuisine. According the interviews I've read, she looks upon nouvelle cuisine as rubbish, preferring to honor and perpetuate tradition rather than fanciful efforts to make simple items like tacos "elevated" - as though something so delicious and sublime needs elevation. The next year, I would trap my friends into going. And then it would seem that no trip to Mexico City would be complete without a visit. 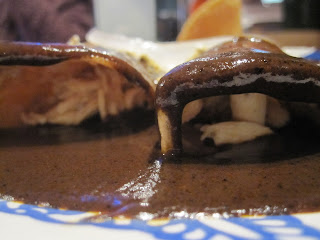 Usually, I have something like the chilaquiles or the carnitas. This time I was in the mood for something different: mole. But I didn't want a large piece of chicken so the enchilada would have to do.

El Bajio has several locations around Mexico City and one might think that with scale comes some level of blandness, not so with El Bajio and its obsessive chef/owner. The mole, quite simply, was a revelation. Near perfection. With some moles, I'm inclined to add salt to boost the flavor. Not so here. The flavors pronounced yet smooth. A complete harmony and symphony. Nothing too high, nothing diminished. It was one of the very few times in life that a dish actually spoke to me. 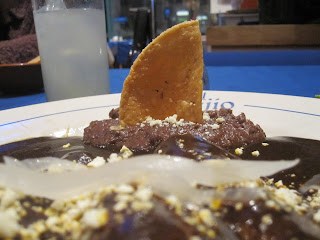 That totopo and frijoles are lurking about.

When it comes to cuisine like this, you want to hoard it hungrily, greedily, selfishly. You want to covet it like The Lord of the Rings. It is sublime. It is the incarnation of why Carmen Ramirez scoffs at the new cuisine. When tradition is carried forward in this manner, you don't need anything else.

Considering my dining companions, I fight the urge to scarf this mole down at high speed. I want to chew and slurp and dabble and mop up the sauce. I want to cry at its beauty. Instead, I savor in silence. I remain calm and stoic lest Senora think that I'm just a crazy fool. 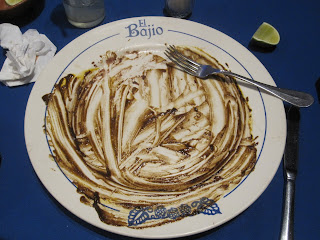 As our meal ends and I'm traveling along the darkened streets of the big city, I feel content in the world. But just for a moment.
Posted by onocoffee at 11:01 PM No comments: Links to this post 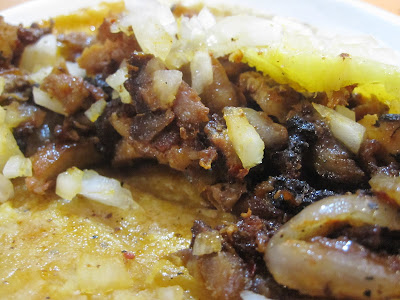 Up close and personal with the Pastor.

My whole obsession with tacos al pastor must be reaching new heights. While walking down the block today, I noticed a trompero setting up his trompo with a stack of raw marinated pork. I had never seen the trompo up close at the start of the day and it was fascinating to see it live.

Turns out that today is the first day of operations for the new Los Cunados taqueria. After some debate at the shop about if it really is their first day, I decided that a new pastor stand deserves a little investigation and so off Eliu and I went. Me to order and Eliu to sort out the Spanish that I was sure to bungle.

Of course, Eliu doesn't speak much English so his role was mainly to field questions and answer them on my behalf otherwise I'd have a shopful of taqueros looking at me like I was Brother From Another Planet. Gracias, Eliu.

The rescue started almost immediately. As we walked up to the trompero, I asked him to make us diez (ten) tacos para llevar (to go). That's when the flurry of questions started coming and Eliu stepped in to cover me.

How many tacos would you like on the plate? Two? Three? Answer: five.
Do you want salsas and limes? Answer: Si.
How about something to drink? Answer: Diet Coke.

If it had been me all by myself, it would have taken me double to time to slowly, excruciatingly translate what the trompero was asking, mis-interpret a number of words, nod mindlessly "yes" to try to smooth the situation and finally, maybe, actually get it correctly. Meanwhile, the cadre of trompero, cooks and customers would have been looking at me like I was some crazy gringo asking for ten tacos that couldn't speak Spanish.

Finally, with a bagful of tacos al pastor, some condiments and a couple of Diet Cokes, we made our way back to the cafe to share in the bounty. At 12 pesos per taco, they're a bit more expensive than other places but they are larger sized tortillas and tacos which means more value for the money. With ten tacos, we had two each and I found myself feeling kinda full after the first taco.

The big question is always: How does it rate against El Rey del Tacos al Pastor - El Vilsito? They're okay and very different. First, the spice marinade is different. The trompero slices the meat thicker than Vilsito making it more chunky (comparatively). After slicing the meat, the trompero drops it onto a very well oiled plancha meaning that everyone noted that the tacos were greasy.

The green salsa was very mild, the red salsa was just right with a slight touch of heat but the true star of the tacos were the tortillas themselves. Golden yellow in color with a light flakiness and solid corn flavor. Very nice. Me gusta.

All in all, Los Cunados offers some decent tacos al pastor. Can't say they're worth rushing across town through heavy traffic (like Vilsito) but they're decent enough. Bear in mind that today was their first day of business and things are likely to change and improve. It's important to note that because it takes a little while for a new shop and staff to really get into the groove and the trompero looked a bit harried because he was trying to pump out ten tacos for me and a couple more for some other guests.