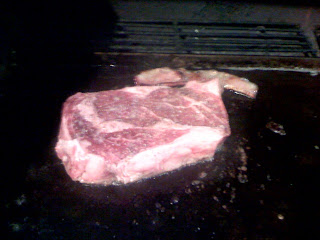 The grass-fed, free-range ribeye lands on the bacon fat plancha.

My older cousin Ellen is visiting from the Philippines this week and it's been a nearly non-stop cooking excursion. Tonight's dinner was some crispy fried bangus or milkfish with a ribeye steak - a Filipino surf and turf of sorts.

The portable plancha has been sitting outside lately and was in need of some care, so I lit up the charcoal grill, grabbed some bacon and went to town. After stoking the fire and burning down the coals to epic proportion, I dropped the portable plancha on top of the grill and let it heat up. Sprayed some PAM to coat the surface and layed the bacon to do its' magic.

Just like a cast iron skillet, the plancha needed to be seasoned. Just a little grease and a bit of heat and it's ready to go. By the time the bacon was laid, the surface had already turned a brown patina as the fire was just that hot.

Of course, I'm a purist when it comes to steaks. I prefer a little salt, a little pepper and a searing heat to make the most out of my meat. Especially since I'm using grass-fed, free-range beef that's got such a wonderful flavor on its' own, it's almost a shame to adulterate the flavor in any way.

So, I leave it up to my cousin to decide: on the grill over searing heat, or in the bacon fat on the portable plancha? She chose the plancha.

By this time, the portable plancha was nice and hot and the bacon fat was tempting to start smoking, so I had to work fast. Drop the steak onto the plancha and it starts to sizzle violently. Carmelize and turn over. Carmelize that side, but I'm noticing that it's not developing the nice crust I like so much. At the very end, I pull the portable plancha back and away from the coals and lay the steak directly onto the griddle grate over the fire. 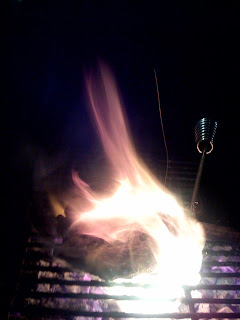 Once it lays, it explodes into flames as the bacon fat drips violently off the ribeye. Flames two feet high shoot off into space. Sizzle. Sizzle. Whoosh, another shot of flame. It's glorious.

Flip it over and the grate has left hash marks, damn you'd think I worked at Sizzler Steakhouse...

A few moments later and the flames continue their angry dance around the ribeye in an odd, but mystifying Lord of the Flies kind of way. Another moment passes and then: done. Pull the steak off the grill and onto a plate to stew in it's own juices for awhile.

Five minutes later, the steak, bangus and bacon are being served with hot, steamed rice, kim chee and an Argentinian Chimichurri for the steak made by Juan Manuel. It's a delicious meal and while the bacon fat produced some interesting results with the steak, I think I'd prefer it grilled simply with just salt and pepper.
Posted by onocoffee at 10:32 PM 1 comment: Links to this post 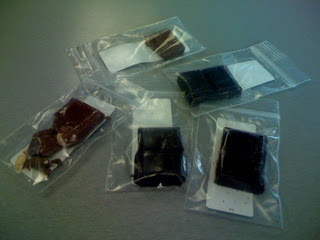 Chocolate bar samples. What a joke.

I was cleaning out some of the drawers at The Spro today when I found these chocolate samples from a New York State chocolate company. They sent them to me to try out and consider carrying their rather expensive bars.

Now, I'm open to new and interesting products, it seems I'm always trying something new and I certainly can't carry everything so a company has to make an impression and this company made a poor one.

Note to potential vendors: if you're touting your "great quality" in a chocolate bar then how about sending the whole damn bar? What's with these two pieces of chocolate? I've got a staff to sample the product to and get their feedback. Plus this measly offering just makes your company look cheap. Damn cheap.

Further, I do expect follow-up phone calls to see what we thought of the product. However, if you're such a miserly company to only send these measly samples, don't call me six times to see what I thought. I thought poorly, that's what I thought. If you're going to be this cheap in our courtship phase, then how much abuse will I have to endure if we get into bed (so to speak)?

Suffice it to say that we passed on doing business.
Posted by onocoffee at 10:59 AM No comments: Links to this post