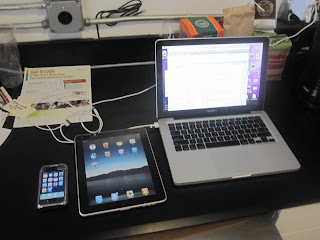 My array of Apple Communication devices.

I've been playing around with my new iPad 64GB for just over a day now and every time someone asks me what I think of it, my only reaction is: "Stupid." I'm just not that enamored by the iPad.

To me, it's really just a very large iPod Touch, or an iPhone without the camera or the phone. It's kind of awkward and clumsy to hold and read. You want to put it down but then it's lying flat and you want to angle it, but to do that you have to prop it up with something (though I'm sure someone is selling an overpriced stand for it) - and Belkin is selling a cover for Fifty Bucks.

It's a relatively fast unit to surf the web, but I think that's more because of our connection at The Spro than anything else. It works pretty well and while I'm still exploring its applicability, I'm not enthralled by the unit nor it's expensive price tag.

Worth it? I doubt it. Unless you're someone who thrives on having the latest techno gadget. Otherwise, it's hardly more exciting than my three year old, first generation iPhone.
Posted by onocoffee at 2:45 PM 2 comments: Links to this post