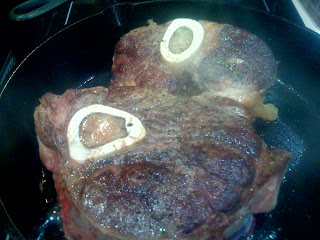 I spent most of the day today just cooking - preparing the sauce for Chilaquiles Rojo, roasting Tomatillos, making beef stock and enjoying a couple of meals along the way.

First on my hit list was a sampling of baked goods from Hermanos Navarro. A bite of chocolate donut, a bit of concha, a piece of bread and some freshly brewed Brazilian Cup of Excellence coffee roasted by the famous Andrew Barnett of Ecco Caffe in Santa Rosa, California. 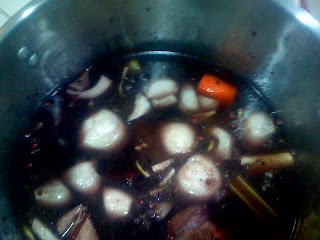 The stock gets rolling.

Once breakfast was over, it was time to get to work. Second on the hit list was to prepare my favorite breakfast: chilaquiles. Actually, I wasn't going to eat it, just toss some onions, garlic, tomatoes, chipotles, cilantro and chicken stock into a pot, heat it up and blend it into a puree. Divide them up into pint containers and freeze for when I get "the itch."

Buying tomatoes, any tomatoes, in the middle of winter is a bit of a disappointment. Those romas may look red on the outside but they're still a bit green on the inside. Not the most ideal tomatoes, but when you're desperate... 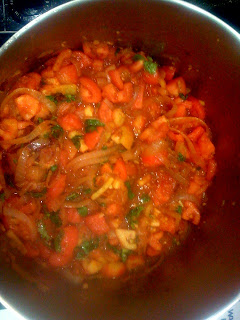 The Chilaquiles gets rolling too.

One of the nice things about having a friend who is a chef is the exposure to some really fantastic ingredients and information on what to do with those ingredients. During our shopping excursion to the farmer's market, I mentioned that I was looking to buy some beef bones for stock. The next day, Spike hands me a beautiful package of sliced beef shins from Roseda Farm.

The shins are beautiful, thick cuts and the bones are filled with luscious marrow. Season them with a little pepper, sear them in a pan and into the pot they go. Add some carrots, celery, white onion, whole black peppercorns, bay leaves, a bottle of really nice Spanish red wine, cover with water and onto the induction cooktop they go for a nice five hour (or so) simmer to get the "good stuff" out. 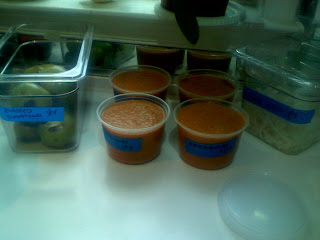 Roasted tomatillos, Chilaquiles ready for freezing and some white onions.

I've got some tomatillos roasting the cast iron. Once they've blackened a bit, they're done and ready to make green chilaquiles sauce or a salsa verde. Since I can't decide which, I'll wait until tomorrow.

Drop everything into appropriate containers and it's time for lunch!

Lunch is relatively straight-forward. I've got a bag of blanched GPOD70 french fries in the freezer, so heat up some peanut oil in a pan and it's time to make fries. Of course, I can't find the thermometer and I'm going to have to guess. Which means that I'm going to end up with beautifully golden fries that are soaking in oil, ugh!

Whip up a ribeye from Springfield Farm in the cast iron with some butter and canola oil, sautee some slice shiitake mushrooms, deglaze with some of the beef stock straight from the pot and whip up a quick mesclun salad with walnuts, Fuji apples and raspberry vinaigrette. There's some fresh white rice in the rice cooker, grab a Mexican Coke from the fridge and we're on our way!

Not a bad way to start the week. 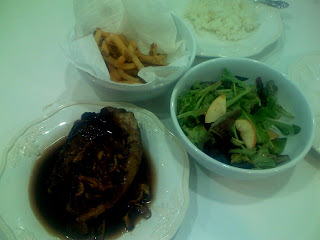 Posted by onocoffee at 3:34 PM No comments: Links to this post