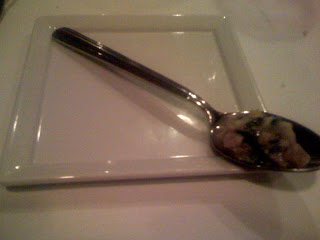 My Aunt Aleli and Uncles Lito and Norman are visiting town this week which means daily family dinners. After a great meal at Woodberry Kitchen last night, they wanted to try something else so I decided to give Abacrombie a try.

Yes children, there's more to life than Abercrombie & Fitch and this Abacrombie isn't related to the other. The restaurant itself has suffered some hard times lately but new proprietor, Jerry Pellegrino of Corks fame, has taken over and placed Jess, formerly of Pazo, in the kitchen.

Wintertime means symphony time and when we arrived at 7:15pm, the place was pretty full. By 8pm, the dining room seemed like a howling desert - a stark contrast to the impossibly full Woodberry. Not to worry, just means the kitchen has more time to focus on our meal. 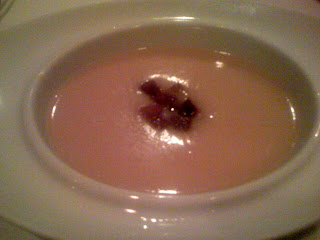 The first course was a Tuna Ceviche amuse bouche. A nice touch that was well-executed and just a biteful. Light, flavorful and just the right balance of lime and chili peppers.

The next course was a Split Pea Soup that had nice flavor with the apple smoked bacon but was heavily salted. Everyone commented that it was just "too salty" and that detracted greatly from the dish.

Service was a bit uneven. The soups came out with covers and while everyone elses' covers were taken away, I was left with mine as, I guess, a souvenir. Other problems were that the front of the house didn't seem to be communicating very well because they just didn't know which dish was supposed to go where. Not to mention the spotty and unpolished glassware that I could see from across the table.

My nephew, Paoi, decided to go with the Chilled Shrimp Cocktail which had me envisioning the usual U-10 frozen shrimp with their bright red-orange color. However, I was pleasantly surprised to see that these were large prawns with their heads still intact and looking as though they came from Marvesta on the Eastern Shore. 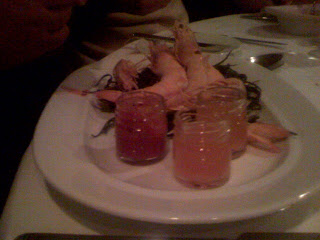 Moving on to the main courses, I decided to go with the Bistro Steak. Now, I hate to seem like an overly critical customer who wants to know where everything comes from, but I had to ask our server if the beef was local. While he mentioned that it came from Pennsylvania, he didn't know much more beyond that fact which was something I found disappointing.

The steak however, was very tasty and quite enjoyable. Topped with a bleu cheese butter, the flavor was unique and the haricots verts were really darn good. Our table shared a few side dishes of macaroni and cheese, califlower gratin and haricourt verts. 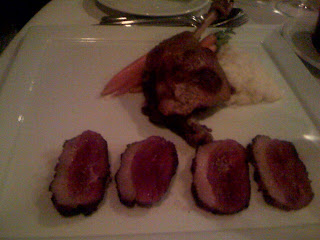 Paoi, on the other hand, choose quite wisely with the duck. I sampled the breast and it was delicious. One thing I have to say about my nephew is that he's not too afraid of food. Seems he'll try anything, from raw oysters to raw fish to anything else, he hasn't disappointed when it comes to trying something out of the box.

Speaking of out of the box, it surprised me when our server told us as the outset that the beef cheeks were already sold out. It was only 7:30pm and sold out already? Either they were that busy and it was that popular or someone forgot to do something. It was a bit disappointing since that was the one dish I wanted to try. 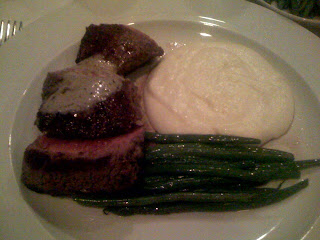 The rest of our meal went by smoothly. My dessert, called "Breakfast for Dessert" was truly interesting and something that I really enjoyed. Bacon toffee - who knew? That's something to consider for future reference.

In spite of the problems I listed above, our service was quite good and they accommodated my request to build a milk sorbet plate with blood orange sauce for Paoli quite readily. 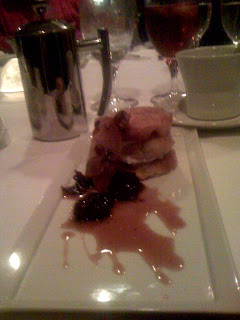