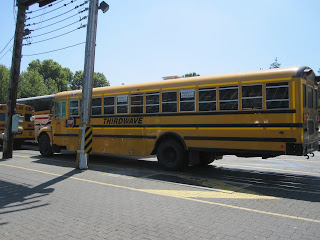 For all you Third Wavers out there...
Posted by onocoffee at 4:32 PM No comments: Links to this post 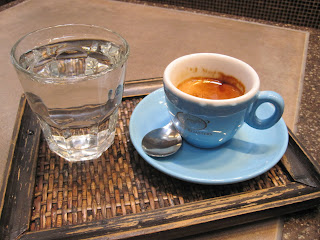 Did a quick tour of some of Vancouver's hippest coffee spots. By no means is this an exhaustive list of coffee joints, just the places that I visited - and I certainly was not highly motivated to visit a lot of places.

49th Parallel is arguably the leader in the Vancouver scene, with everyone else following somewhere behind. In the few short years that they've been open, they've done a remarkable job establishing themselves as a veritable force in the coffee business. From specialty, Third Wave coffee joints to my local William Sonoma - they're seemingly everywhere and more so than American darling Intelligentsia.

While I found the Epic Espresso to be pleasantly bright and acidic by itself, I did not fancy it in milk. To my tastes, it's definitely not a milk-friendly espresso. Better to leave the Epic all by itself and look elsewhere for an espresso to go into milk. Perhaps something with a but more chocolate character to round it out. 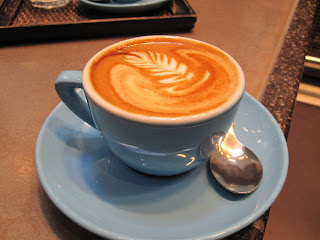 Like Seattle in the United States, Vancouver has long been the leader in the Canadian coffee scene. But I'm here looking for something truly exciting in the PNW. I'm looking for innovative places doing innovative things while brewing up beautiful coffee and I'm finding much of the same. Shops here are either slaves to the Clover Automated Brewer or they're following the fashion of pour over drip bars. Nice but nothing really innovative to get excited about.

Drew had been telling me about a bakery cafe in the Fairmont Hotel that's supposedly serving great baked goods. Since my hotel is about a block away, off I went in the morning to seek out something tasty. There I found Giovanne Cafe, a hip and modern looking cafe with the requisite Fetco brewers and La Marzocco espresso machine. I asked the barista about their drip coffee and he replied with two brews: the Tiger Blend and the dark blend. I didn't ask much about the dark blend and went with the Tiger, along with some sugar and cream. 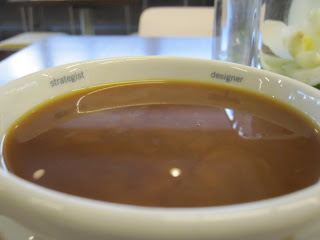 I wasn't really in the mood for espresso which is why I went for the drip. Not bad, about the same as your average coffee blend. Add some sugar and cream and it's an acceptable accompaniment to the very moist and tasty scone. Winner.

Back at the Hines Origins roastery, I had a nice cappuccino that was a bit on the fresh side (compared to our aged espresso at Spro)but a nice start to our breakfast platter provided by Tony (sorry Becca). 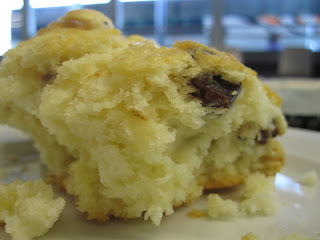 From there, it was off to Momento - one of the newest coffee joints in the Vancouver scene and the only shop with a proper vac pot (syphon) bar. We hung out there talking coffee, coffee shop politics and recipes for a while before heading over to the new Elysian Coffee on Broadway.

Elysian is a long-standing local coffee house and this is their newest cafe. It's modern and hip-looking and they're serving coffee from 49th Parallel and Intelligentsia, though word on the street is that they're breaking away to roast their own coffee soon. The environment and presentation is clean and thoughtful though I found their "macchiatto" (quotes mine) to be rather odd. 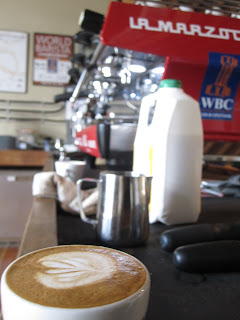 The Elysian "macchiato" is a four ounce drink in a Gibraltar-style glass. It's easily one of the largest "macchiato" I've ever experienced. Second only in size to the Starbucks Caramel Macchiato, it's more along the lines of the 49th Piccolo Latte, Intelligentsia Gibraltar, Australian Flat White and the rest of the world's Cortado.

There's a lot more to check out in the Vancouver scene but I didn't want to make an entire day of touring cafes and drinking coffee. I had a ferry to catch! Next time we'll hit more cafes. 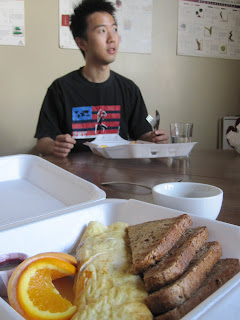 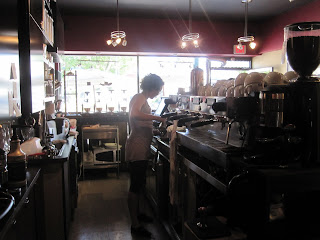 Living the dream at Momento. 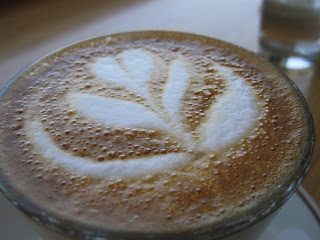 A 4oz "macchiatto"(huh?) at Elysian Coffee.
Posted by onocoffee at 3:59 PM No comments: Links to this post 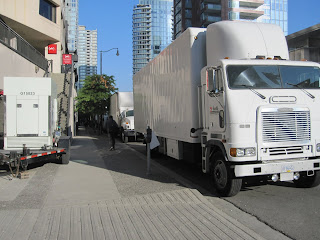 The Trucks Of Production.

Yesterday, as I was arriving at the Renaissance Harborside Hotel, I noticed the young lass wearing a headset and it struck me as odd. She was dressed casually in a white v-neck and dark shorts, not your typical hotel staff uniform. As I checked in with Anna, she informed me that the exercise room would not be available today but they have made arrangements with the Marriott to accommodate our workouts should we need one. I didn't want to disappoint her by telling her that my working out was unlikely.

Turns out they're using the exercise room as a set for a television series.

By the elevators I met location manager Rico Mielnicki and we got to talking about The Biz and the happenings in the Vancouver scene. It's been years since I've worked on a production but it's good to see that film people are still film people no matter where you go in the world.

Sometimes I miss the Hurry Up And Wait world of film production, but I'm not yearning to go back.
Posted by onocoffee at 7:46 AM No comments: Links to this post