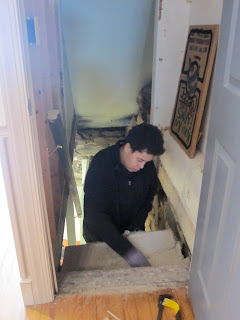 Joy begins the arduous task of stripping the carpeting from the lower level staircase.

There's nothing like a carpet covered staircase with narrow treads to tempt the fate of tripping and falling down said stairs. With that in mind, Joy started on the final bit of demolition in project hampden revealing a surprisingly nice-looking set of wood stairs.

As the days grind more and more away from our original August 1, 2009 opening date, the list of things "to do" grows alarmingly short as I'm running out of tasks to assign to our intrepid crew of baristas. While many shops talk of their baristas building their business, our crew of baristas are actually physically building the business itself. 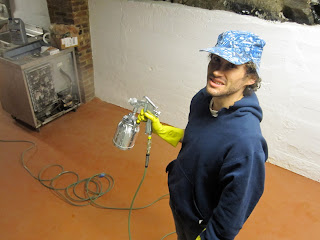 Jeremy prepares to apply the final coat of sealant to the stone walls.

In an ironic twist of fate, one of the most interesting architectural features can be found in the bowels of project hampden, and it's a feature I've been struggling to preserve.

Beneath the 1920s era pine floors are the original stone walls that frame a space with amazing potential. Early on, visions of late night, underground dance parties with international club deejays filled the minds eye, but the realities of running a speakeasy set in and I've had to make do with simply keeping the space open and fighting the occasional "suggestion" that we enclose the space with drywall. Yuck!

Descend into the lower level and you'll find large stones embedded into the walls that are the buildings foundation. What was once a dirt-covered crawlspace has been transformed into a cool and sexy, stone-surrounded den. All that is needed is a liberal application of sealant to maintain the stones natural beauty.

At first, we tried brushing to slow effect. Then Jeremy had the brilliant idea of grabbing a compressor and paint gun from his house and spraying the stone with the sealant. In a few quick hours in the haze of air suspended dust and sealant spray, the walls were coated and the dream of an underground speakeasy could live on - if only in the mind.
Posted by onocoffee at 10:14 PM No comments: Links to this post

"Okay, What's Wrong With You Now?"

Ever have those days where nothing major goes wrong but a string of unfortunate occurrences combines to just irritate you immensely? Yesterday was one of those days. It's when you need someone to ask how your day went and what's bothering you.

Days like these are when I call R. because she always seems to know what to say and when to say it. If things are messed up, she'll tell me. If I'm the one who's screwing things up, she tells me too - especially if I'm the one screwing things up. No hiding, no need for games, nothing to be coy about - just the straight dope, as only a woman put it so succinctly and so bluntly.

Perhaps it wasn't just the one day but the culmination of months of buildup. Most of the time, the days irritations never bother me, but tonight I just felt a bit off, like I wanted to pick a fight with someone. Instead, I called R. to see if she wanted to hang out a bit - happily, she always makes time for me.

"How are you? What's going on?" is how she typically starts things off. Like any self-aggrandized male, I give the terse "I'm fine" in reply. She's good because she can usually tell the difference between the normal "I'm fine" and the "I'm fine" that means I'm really running at 85%. "Okay, what's going on with you now?" and then we're off to the races.

I don't always need it, but it's nice to have someone who knows you enough to know when you need someone to listen to you bitch for a little while.
Posted by onocoffee at 3:44 AM No comments: Links to this post