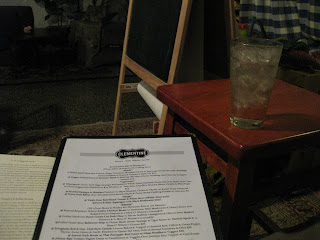 Waiting for my table at Clementine.

Sometimes I have to wonder if Clementine and I were just never meant to be. After hearing good things about the restaurant from friends like Spike, I tried to visit a couple of times this summer. The first time I went, I ended up there around 3pm and found them between services. Evidently, Clementine is one of those restaurants that doesn't really have kitchen service between dayparts from 3pm to 5pm. All they had that afternoon was cold gazpacho and a sandwich - not exactly enticing.

The next time I visited was on a Tuesday and found the restaurant closed. That was irritating.

For me, Hamilton is pretty far out of my way and now I've made two trips across town for nothing. But I've heard so many nice things about the restaurant that I wanted to check it out. I decided to go for dinner. 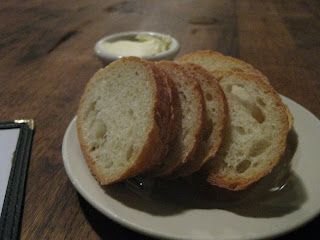 Again, Hamilton is way out of the way and since it's all surface streets, it takes at least twenty minutes to get there from Towson. Hamilton is one of those up-and-coming neighborhoods that's been experiencing a renaissance and as such, the street parking is minimal and there's nary a spot in sight. I make a couple of passes up and down Harford Road, and down the side streets surrounding the restaurant and then give up in disgust.

As I'm driving away, I decide that I'm gonna give it another go and make a u-turn. Maybe this time I'll get lucky but if not, I'll just go down the road to Chameleon Cafe instead. Lady Luck must have been with me because there's now an open spot across the street from Clementine. I hit a U in the middle of the street and slide into my spot. Beautiful.

Inside, the restaurant is packed. There's a huge table of twenty nearing the end of their meal and the hostess tells me that it should be about a ten minute wait. I take a seat in one of their couches and settle in with my book: Herve This' Kitchen Mysteries". After a few minutes, the hostess pulls up a small stool and a glass of ice water for my wait. It's a nice touch that really hits the spot.

The book is interesting but it's pretty dry reading. Pretty soon, I'm in the mood for a nap. I decide to read the menu instead. There's some interesting items on tonight's menu and by the time the hostess returns to tell me she has a table ready, I've already made my selections. 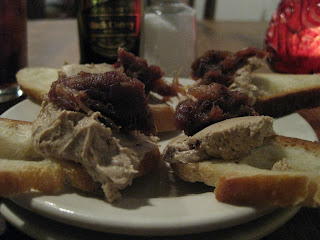 I'll have a glass of the Black Cherry Soda to start, then an order of the Macaroni & Cheese and for my entree I'll have the pork chop.

Maybe it's too much to ask but I think people should smile. Especially those in the service business. Sure, I can understand that you might be having a bad day, but so what? I don't care if you've had bad day - you want a tip. Work for it. Smile, that's all I ask.

And is it too much to ask? Certainly if I'm having a bad day and I don't leave a tip because of it, I'm labeled an "asshole." Then why is this kind of attitude okay and you still expect a tip? Smile. It's so easy. It's a shame too because my waitress is a far cry from the hostess who greeted me and welcomed me to the restaurant. Why couldn't I have her instead of this dour sourpuss? 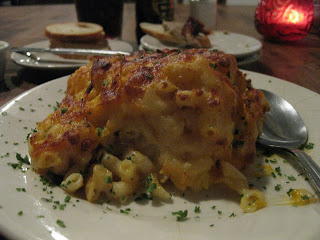 On the menu, it says: "Please allow 14 minutes for cooking time" for my Mac N Cheese to be ready. I'm okay with that. I can wait. Besides, I've got bread. Sadly, the bread is lame. It's a baguette, sliced thin and it tastes like cardboard. It's lifeless and is wholly unenjoyable. You know that bread that dances on your palate? This is not it. Even butter and salt don't help this bread. A poor way to start the meal. In fact, the bread is a as dour as my waitress. A shame.

I'm reading my book, enjoying time by myself and generally letting time pass on its' own. I'm a bit hungry but not in a rush. I've got water, a black cherry soda and some lame bread to satiate me when one of the runners comes up with a small plate filled with four pieces of bread with pate and topped with date jam. He tells me that this is compliments of the chef and he apologizes for the wait.

Compliments of the chef? Well, that's nice. I certainly enjoy receiving complimentary treats from the kitchen, but what is he apologizing about? The Mac N Cheese? Honestly, I barely noticed how much time has passed. In fact, I don't know how much time has passed because I've been enjoying my time there. Herve This' book, while dry, is quite interesting and, in my mind, things are progressing smoothly. Though I do appreciate the thought and consideration of the kitchen.

More time passes and my waitress comes up to ask if "they" told me what happened. Who would tell me what happened? I wonder to myself: You're my waitress, you're supposed to be taking care of me. Only YOU would tell me what's going on. Next she tells me that the kitchen "forgot" to put the order in the oven and that the Mac N Cheese will be on the house. That's nice but not necessary as I'm not in a rush and didn't even notice that there was an extended delay. Either way, I'm glad they took the time to notice and offer to make corrections.

The Mac N Cheese itself looks quite nice. There's a big mound of it on the plate. It's crisp on top and vibrantly orange from the cheddar cheese. I take a bite: hot and sort of tasty. It's in serious need of seasoning. It needs salt. A sprinkle of salt later and the dish starts to come alive. There's the sharpness of the cheese. There's the creaminess. It just needed a little salt to make it speak for itself. 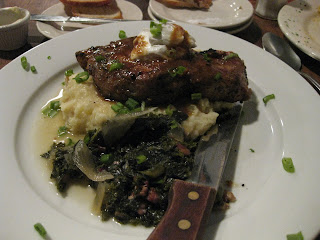 Things are rolling now because the pork chop arrives a few minutes later and it looks like satisfying goodness. In fact, it tastes like satisfying goodness. Everything on the dish is on point. The pork is grilled and alive. The seasonings make it sing with delicious porcine goodness. The greens are sauteed kale with bacon and just right. And the mashed potatoes make a dazzling performance with it's creamy, buttery texture. Hey Mikey, he likes it.

But I can't finish it all. It's too much. I'd like to. But I'd be remiss if I did. The pork was delicious. The Mac N Cheese was decent, and the complimentary pate was pretty good as far as pate goes (I'm not typically a fan of liver). Mixed with the date jam made it good to eat.

The only real problem of the evening was my dour waitress who couldn't be bothered to smile at anyone all night. If she smiled a little, it would have improved the experience tremendously. It's unfortunate. But what's truly lame about the experience was the bill. Without regard for what she had said previously about the Mac N Cheese being complimentary, there it was on the bill. 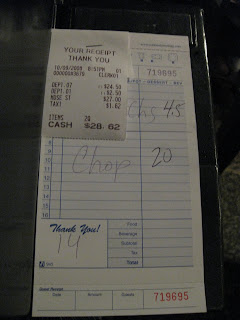 If you look closely at the image, you'll notice on the handwritten check that there's the pork chop for twenty bucks and then at the top there's the mac n cheese (written as "chs") for $4.50. But on the register receipt, there's one charge for $24.50. As though the whole mac n cheese thing never happened. The worst case scenario is that she lumped the two charges together in a ploy that I wouldn't notice that she had charged me for the mac n cheese.

Like I said, I didn't notice a problem with the time because I was enjoying myself but when you state that you're going to comp something, I expect you to keep to your word and this waitress was not only dour, didn't smile and lied, she also tried to cover it up by lumping the charges together as though I were too dumb to notice.

Since I'm an operator and can sympathize with the needs of a business to make money, I decided not to pursue an argument about the charge. Afterall, I didn't have a problem with the timing and was willing to pay. My problem was with the dour waitress and her attempted deception. So, rather than cut the restaurant out of needed revenue, I made sure to chop the tip to a razor fifteen percent (instead of the usual 18 to 20 percent).

Not that this will correct anything. Unlike many people's fallacious belief, tipping does not correct bad service. It only reinforces it. And when you tip poorly, it's not a wake up call to the server that he/she needs to improve, it's just a demonstration that you're a "cheap asshole" for not tipping properly.

Just like so many things in Modern Day America, our legions of servers have the Attitude of Entitlement. And a small restaurant like Clementine seemed to be dominated by them.