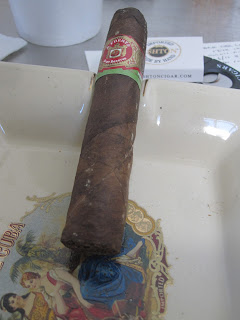 The problem with enjoying lovely cigars is that they tend to fly out of my humidor.

I'm lucky in the fact that I was prudent enough to build a humidor quite a number of years ago. Through wreckless thinking and judicious use of my American Express, I was able to not only build the humidor but stock it as well. This happened in the mid-1990s, during the midst of the cigar boom when scarcity was the norm and low-quality cigars abounded.

But I was still able to lay my hands on a nice collection of La Gloria Cubanas, Partagas 110, a selection of ISOM (Island South Of Miami) cigars, Partagas 150 Anniversary and a beautiful depth from Arturo Fuente, including the first run of the then-new 1995 Arturo Fuente Opus X (which I found not to be to my tastes).

It was literal madness until about 1998 when the boom really put a crush on the quality of available cigars and I stopped adding to the collection altogether.

The beauty of this is that I now had a collection of lovely aging cigars. A wonderful selection. After about five years, the problem changed to one of replenishment. I now had a stellar collection of aged cigars, but I was five years behind the curve. If I smoked the box, I didn't have successive years to replace it. I was in trouble.

By this point, I had started buying nice and decent cigars as a regular smoke, in an attempt to stave off the certain financial ruin that was to come by only smoking my favorite Belicoso Maduro by Paul Garmirian. They're insanely delicious but oh so very dearly priced. Open a box one day and it's sucked dry within a month. Good for Visa's bottom line. Not good for mine.

In 2006, Bryan called me to let me know that Iwan Ries in Chicago was running a sale on Arturo Fuente Rothschild Maduro cigars. Super cheap special prices, he assured me. Sure enough, the prices were cheap, the Visa numbers were blazing and a package of Rothschild Maduros were on their way to me.

When they arrived in 2006, they were nice cigars. The Rothschilds were nice, decent smokes. Enjoyable. Satisfying. And relatively inexpensive (especially when compared to the PGs). I smoked them regularly and enjoyed them.

Two boxes found their way into the recesses of the humidor where they layed fallow for several years, until I found them last winter. Hmmm, I wondered, how will these be now with some age on them? Shockingly good and demonstrably superior to when they were fresh. Aging deepened the flavors, brought out a little spice and just made them into tasty treats.

The problem when cigars are this good is that I can't hold on to them. Just one more, I tell myself - until the entire box is gone. I'll share some with friends. Before I knew it, I was on the last cigar of the two boxes.

And now I'm back to Square One...
Posted by onocoffee at 1:44 PM 1 comment: Links to this post