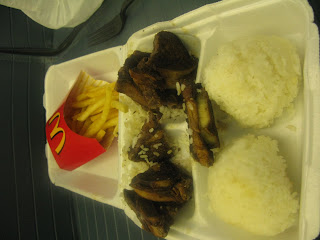 Flying through Chicago usually means one thing: delays. It's gotta be one of the shittiest airports in the world to fly through because it's horribly situated in Illinois where snowstorms and weather cause constant delays year round. And today is no different.

Today is a two-hour delay. But why? Is it because of equipment? Personnel? Who knows? Airlines refuse to tell the truth on anything, much less the cost of fuel - why expect them to come clean on delays? Bastards.

What we really need is a one hundred dollar per person tax on flight delays levied on the airlines. That would cause them to get their act together. Or force them out of business.

Meanwhile, I'm eating my favorite pipikaula short ribs from Helena's (I kept them in the fridge over the weekend) and some french fries from McDonald's while reading The Judas Strain.
Posted by onocoffee at 11:46 PM No comments: Links to this post 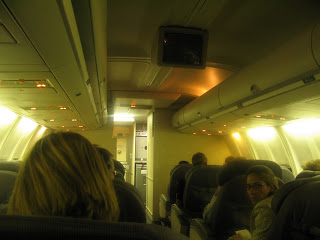 My two week odyssey out west is ending and I'm on the way back home through Chicago. In the news, you always hear about airlines and their troubles. One thing I've noticed is that the airplanes are always full. If they're so full, how come they keep saying their losing money?

And the flight to Chicago was jam-packed. Overbooked. Crap, I should have chosed the upgrade last night while checking in online. Now I'm screwed. Destined to wedge myself in-between some jerkoff and Vince Vaughn - I don't know which is worse. 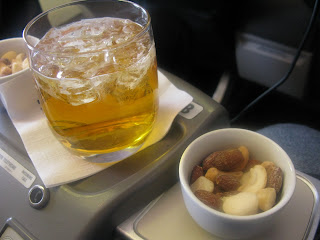 Happily, days of sitting on my ass flying around the world is about to pay off. They've called my name over the loudspeaker and asked me to come to the counter. Of course, there's six LA Airport Police officers standing there too and I can't help but think they're here to arrest me for some past indiscretion. Luckily, they're arresting the drunken lady that wants to fly on our flight and not me (this time).

As I saunter up to the counter, I'm handed a different boarding pass. One that puts me on the other side of the curtain and into the comfortable environs of First Class. It's a domestic flight so I'm not expecting much, but am very glad to be out of the fracas in economy. 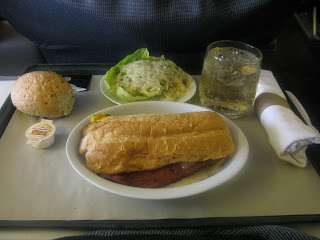 While waiting for boarding, I spot a book that someone has left on a table. I grab it and start reading. It's pretty interesting and since I have no other reading material, I co-opt it for myself. It's called The Judas Strain by James Rollins and it's about some sort of virus that's about to be unleashed upon the world by a shadowy organization that must be stopped by the hero.

Moments later, a young man approaches a black man in a baseball cap and holds out a book for him to sign. I never would have noticed him otherwise, but the man signs the book and after a few minutes, I realize that the man in the cap is Don Cheadle with his two children. Figured he would be in the front with me, but evidently he's crushed somewhere in the back as well. Poor bastard.

The flight to Chicago is pleasant. The First Class seats are actually better and more comfortable than the ones on the 767 to Hawaii. In fact, this First Class makes the Hawaii first class downright paltry. I was expecting the worst and it turned out great. They even used real linens. And gave me warm cookies. 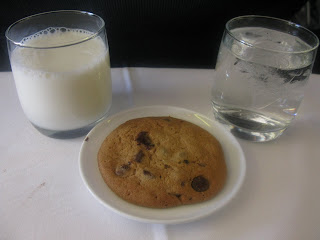 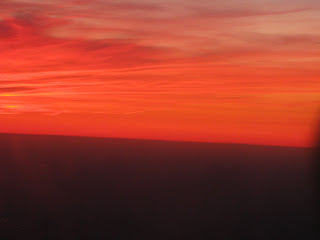 Sunset across America.
Posted by onocoffee at 10:43 PM No comments: Links to this post