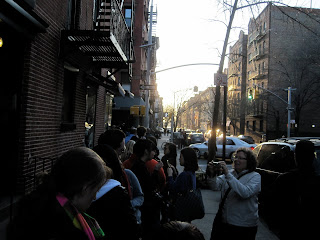 The view from the back of the line

Meat Loaf once wrote:
Maybe I'm crazy, but it's crazy and it's true.

I'm standing in line, in the brisk chill of a New York Sunday in The Village, and I'm waiting for cupcakes.

Once upon a time, I was a jet-setting, thrill seeking, swashbuckling, Dragon Slayer - and now I'm out in the cold with hundreds of women enamored with the Sex In The City lifestyle. Somehow today, I've found myself waiting in line outside of the fabled Magnolia Bakery.

Not to rain on anyone's parade but Magnolia's cupcakes are dry. Dry, dry, dry. Like you need milk, kinda dry. Dry and sweet. Super sweet. Like Krispy Kreme doughnuts are bland kind of sweet. All sweet and very dry. Not fun.

But since we were unable to pickup some samples of Magnolia last night, I thought I would hop down to the Village to pick some up. 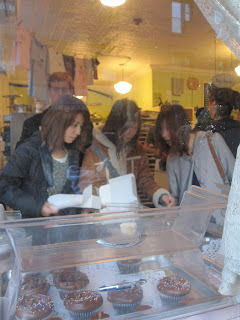 The couple of times I had been to Magnolia in the past, it was a simple job of jump out of the cab, pop in, grab a few and pop back out. I might have spent a combined total of ten minutes getting cupcakes at Magnolia. Not this time.

This time there was a line. I had heard the stories of immense lines at Magnolia but never had experienced them. I had been lucky. This time, I would face the beast myself.

As I recall, I was the only male in line. Imagine: hundreds of women from around the world descending on this very spot, hungry for something sweet and delicious. Six months ago, I would have found myself in a TRE (Target Rich Environment)- but today, they're just in my way.

Oh, the times, they are a-changing...

I looked at the clock on my iPhone: 5:15pm. Good thing Avenue Q doesn't start until 7:30pm, I've got time. I can wait. I can wait until about 6:45pm before I start to jeopardize my ability to make it to the theatre on-time.

There's lots of chatter around me. In various languages. The odd one is the lady behind me who's speaking German, then Dutch, then back to English. She's rambling on about something or other in very animated phrases. I can't understand the languages but she's punctuating whatever she's saying in English. I'm guessing she's quite agitated.

The Japanese girls in front of me are here probably because Carrie and Miranda did something here. I can't understand them either but they giggle every 77 seconds. A group of friends behind the German-speaking lady at talking loudly about how their names are spelled: Kathryn with a "Y", while the other girl is Katherine, with an "I". Their friend is commenting just how perfect it will be to have Magnolia cupcakes while watching the Oscars tonight.

After forty-five minutes, I make it to the portal where a friendly staffer is doing traffic control. The bakery itself is very small and the crew of seemingly hundreds is busy churning out cupcakes and frosting at high-speed. They have to, otherwise hordes of angry and screaming women will descend upon them - and that is downright frightening. 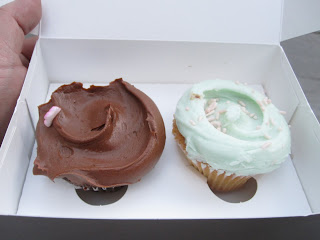 A pair of cupcakes: chocolate and vanilla with the appropriate green icing. They didn't have gray icing. I asked.

He's letting only a few people in at a time, which I don't mind when I consider the chaos that would ensue if someone wasn't monitoring the door. I probably wouldn't make it out alive.

Finally, it's my turn. The cupcakes are placed right at the front window for all to see. A continuous stream of cupcake trays refills the larder almost as fast as the gaggle of women can deplete the supply. I take a two box that has cute little cutouts to hold the individual cupcakes. Clever.

I look at my iPhone again: 6:13pm. I've been on this quest for about an hour. Luckily, I've got time to get uptown to the theatre. Problem is, I now have to care for this little box of cupcakes. As I walk across Bleeker towards Sixth Avenue, I feel victorious. I've achieved my quest for the day and will now take this box uptown to deliver it to my maiden.

Through traffic, pedestrians and into the subway I go. An NYC Cop eyes me suspiciously on the platform. A homeless guy eyes the box hungrily on the train and I must balance the box as I bound up the stairs back onto the street near Times Square. All along the way, I must remember not to put the box down and leave it somewhere by mistake. Somehow, I feel stressed about carrying this damn little box - I've gone through a lot of trouble to get it here.

Finally, she's here and I hand her the box. This little box that has traveled so far. I'm holding it for her, balancing it on top of another box when I stumble a bit and the little box from Magnolia tumbles through the air. And lands upside down. Crap.

I can't look. I know it's carnage. It could have tumbled and landed right side up, mitigating damage to the chocolate and green cupcakes inside. Instead, it's upside down where it landed with a thud. Carnage. I imagine the cupcakes splattered on the inside of the box top. I can't look. I've gone too far to look now. Oh, poor cupcakes how I have failed you!

As we sit in the darkness watching Avenue Q, Princeton sings:

"Moving boxes and others,
He's gonna find his purpose,

And I wonder what my purpose is.

Guess I know what's not my purpose...