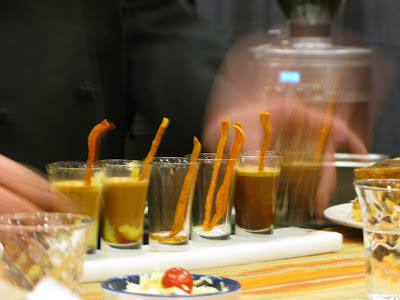 Barista competitions are strange, but interesting slices of a life in coffee. Gather a bunch of really geeky coffee people and let them do their thing for a couple of days. It's simple and relatively harmless fun that's usually done outside of the public eye. 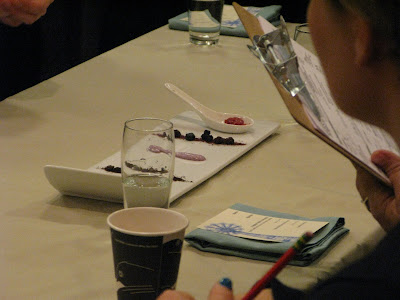 The ingredients in Amber Sather's "a signature drink in two ways."

I was reminded why I got involved with this scene on Friday morning.

For the past couple of weeks, I've been helping Allie Caran, former Artifact Coffee slash former Spro and current Woodberry Kitchen barista, prepare for the Mid-Atlantic Regional Barista Competition. We didn't do heavy, hard-core trainings. Just casual, relaxed and brief sessions that were more about getting into the right mindset about competing (i.e. not like some former champions) and what she wanted to achieve. 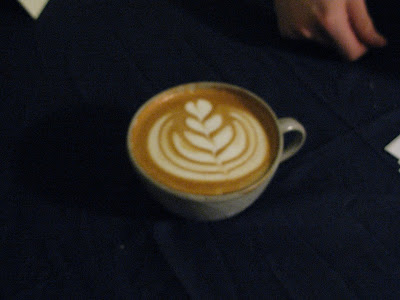 Whenever I help someone prepare, it's less about my beliefs in competition and more about developing a method for the barista's personal philosophies. What is the goal? Is it win at all costs like some competitors and companies? If that's the case, I'm not the right person for that job. But if the message is to share knowledge and passion while performing at the best level possible then I'm interested. Hell, I'm downright excited. I'm tired of all the BS politics that goes on within the coffee business. I left the Hollywood system to get away from that. 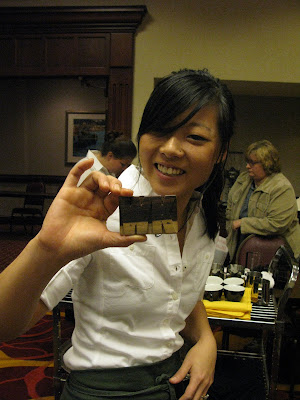 Friday morning was the competitors meeting. After a quick (or not so quick) mile on the treadmill, I head down to the competition space to meet Allie and sit in on the meeting. Outside of the space is the "fourth machine", that extra espresso machine set up so that the public can get a taste for some of the coffees being made in the competition. Working on that machine is Allie, Nikolas and a couple of other first-time baristas. They're going over the Nuova Simonelli Aurelia espresso machine, comparing notes, sharing stories and sharing knowledge and the fact that this is their first time and they're scared shitless.

I hung back for a moment before approaching because I was savoring the moment. A new generation of competition-slash-barista professionals is upon us. These three were a sampling of the next generation in coffee. A new group of baristas who will spend the next few years making and building their reputations. It brought back good memories. 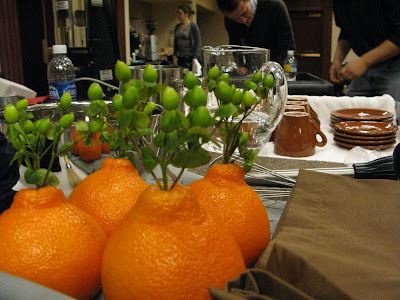 Oranges in the mist.

It was exactly five years ago that I started out in the competition-slash-Third Wave scene. 2004. Daryn Berlin and I shared a table in Atlanta during the USBC. Andy Newbom was some wild-haired blonde guy who kept babbling on about his latest coffee experiment. Sandy Hon busied herself trying to keep everyone from going in sixty different directions. Amber Sather seemed hell-bent on driving everywhere in Intelligentsia's VW Bug. Phuong Tran still had short hair (though it had a slight bob to it). Miguel Meza was that quirky guy from Prince's hometown. Bronwen was still the same. And there was that crazy Korean guy driving all over Atlanta in a yellow Mustang convertible. 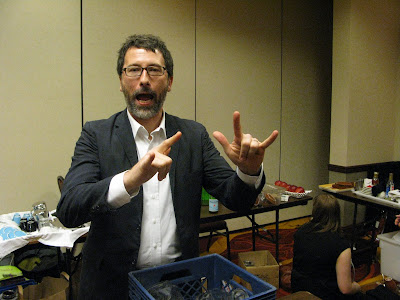 A Fozzy-looking Daryn Berlin getting wild.

Those were good times and it's amazing how things have changed. As I watched Allie and her new friends, I realized that they were us just a few years ago and I wondered where they would all be in the coffee world in five years.

The competition itself was good. Once again, they worked it as a Mid-Atlantic/Northeast regional, holding both competitions concurrently, sharing the space. The host company, Kiva Han Coffee, did a great job staging the competition at the Marriott North hotel outside of Pittsburgh. Through advertising and developing a consumer coffee and food tasting event with the competition, they attracted a large group of regular (non-coffee professional) people attending the event and watching the competition. The crowds were larger than we've seen at the United States Barista Championships - at that one usually has a coffee trade show attached to it. Telling indeed. 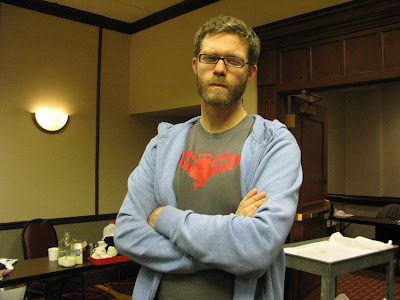 Since it was her first time, Allie was nervous. Down right scared, to be honest. But she's a skilled barista with a great personality and a passion for the craft. The hard part was getting her over the nerves and the unknown having never competed before.

In the end, I think she performed brilliantly. She was nervous. She was scared. She let it show. She was visibly intimidated by the judges and the experience. During our practice session, I remember thinking that she's either going to perform brilliantly or go down in a ball of flames. There would be no middle ground. It wouldn't be one of those boring, droll presentations featuring memorized and recited lines. It would be dynamic, fun and interesting - or a complete and utter disaster. 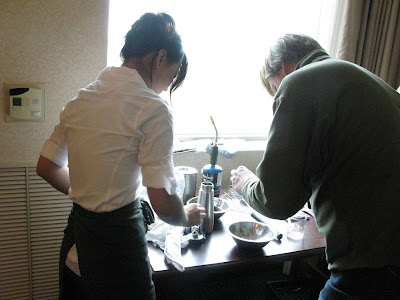 While I'm typically a blunt and straightforward kind of person, I almost never tip my hand when I'm thinking thoughts like these. I don't want to place the cloud of question in anyones' mind. We keep moving forward. We keep working towards our goal. For me, the goal isn't to win. It's to show and show well. Share the knowledge of the ingredients and share the passion for our craft. I think Allie's goals are aligned with my own in many ways, which makes it wholly rewarding to work with her.

All barista competitors are nervous when they take the stage. I know I am. The moment she started, it was full speed ahead. Great enthusiasm, great passion and great personality. It just shows. It comes through. And it's not something you can teach or coach - it has to be there naturally. It's so common to watch a barista competition and all of it sounds scripted and rehearsed. 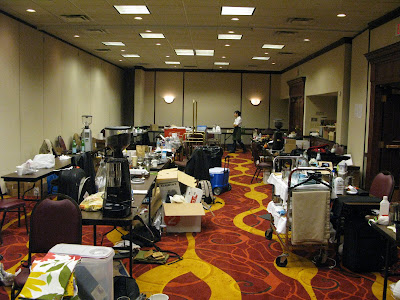 The last moments before the Finals.

During her presentation, she dove right in. Then the nervousness built to a crescendo and she had to take a moment to compose herself, commenting "I can do this" before pulling herself together and pushing forward. It's surprising. It's unexpected. It's honest - and that's endearing to both the judges and the audience. It's also the sphincter moment because you really don't know if she's going to make it or if this is her last stand - and we're only a minute and twenty seconds into the presentation! 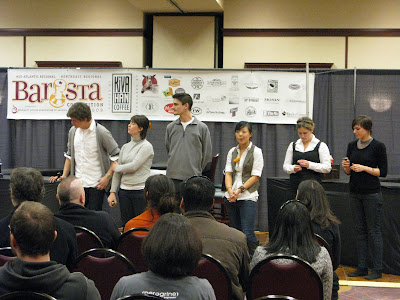 But she did fine. She pulled through and performed brilliantly.

And in the end, she made it into the finals and took fifth place against the most seasoned and experienced competitors in the region. Not bad for your first outing. 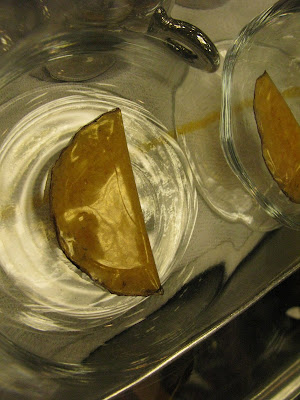 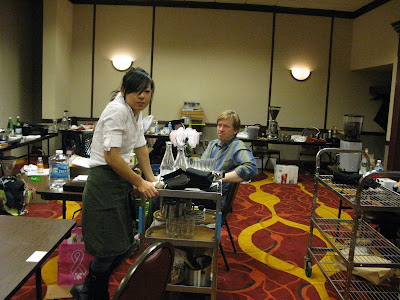 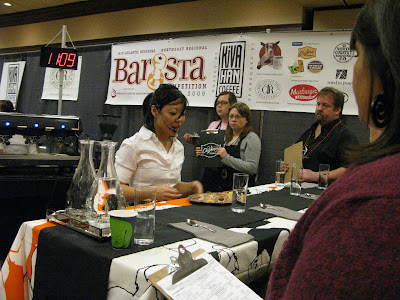 Showtime. Allie describes the components of the signature drink. 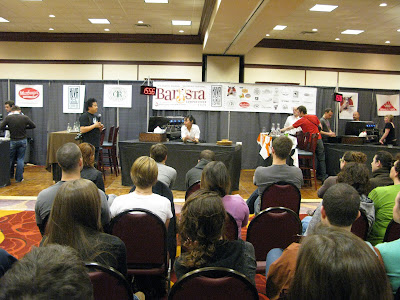 Explaining the signature drink to a record audience. 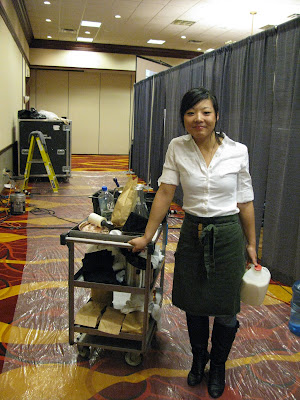