Looking For Your Bags On USAirways 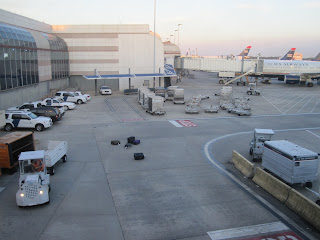 Maybe that's your bag that didn't make it to Ka'anapali.

Ever wonder how baggage gets lost in transit? Especially in this world of "high security", TSA screenings and everything designed to "protect" us from harm, you'd think they would be able to track your baggage with a high degree of accuracy - not to mention that they now charge you for the "privilege" of checking your baggage.

In a discussion with a Charlotte Douglas Airport representative downstairs in the US Immigration "sterile zone", I was informed that despite the lack of Global Entry machines, Charlotte is the 7th busiest airport in the nation.

Seventh busiest. You'd think that at the seventh busiest airport one of the US Airways baggage handlers would notice that five bags were lying in the main passage lane from the terminal to the tarmac.

My vantage point in the USAirways lounge overlooked the lost baggage. Handler after handler drove past, some with empty carts, most of them slowed down to look at the baggage in the lane. Others actually looked like they were considering stoppping, but perhaps that would be too much trouble - afterall, they're getting paid so there's no need to make sure the passengers get their luggage on time.

Finally, after about fifteen minutes (which is a large enough window for your plane to leave without your baggage), and literally fifty passing handlers, a supervisor in a golf cart finally swung by, picked up the luggage and took them back to the terminal.

Traveling around the world, I hear a lot of maligning of USAirways. This can only contribute to the loss of confidence I hear many people share.
Posted by onocoffee at 7:19 PM No comments: Links to this post

The Little Pambazos of Ben Franklin 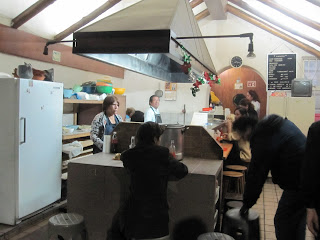 Right before we went to Hamburguesas Montaner, Ana asked me if I had tried pambazos. Of course, I've tried pambazos - that ubiquitous Mexico City bolillo sandwich that's sauteed in salsa rojo. Actually, I've never had it here, only at the fabled Fiesta Mexicana in Baltimore, but it's pretty authentic.

But, as she noted, I hadn't had these pambazos.

We were in the neighborhood to try the bandillos and I was a bit weary of having a big pambazo after eating at Hamburguesas Montaner, thinking that we were going to try a different twist on the typical pambazo. Maybe we can get one to go and that we can share. 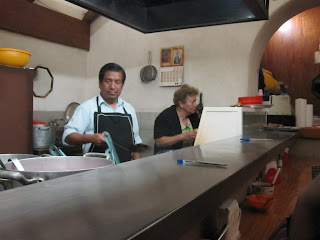 The mother and her son.

Forget what you know about pambazos, this place is something different. Instead of the traditional bolillo, they have racks behind the counter of flattened out dough ovals that are dropped into a fryer once you place your order. Suddenly, you realize that this really is going to be different. 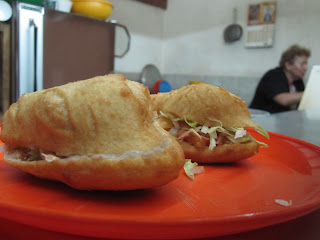 The dough comes out light and fluffy on the inside and slightly crispy on the outside. It's like fried dough heaven and you have arrived. And it's fried by the matronly mother (or maybe grandmother) who carefully fries the dough, slices it open and fills it with your choice of filling. She's deliberate and methodical in her work and you quickly realize (so long as you're paying attention) that she's a master of her craft and you're about to experience it first-hand.

For ten pesos, you can have a pambacito with your choice of filling: carne deshebrada, salpicon, papa con chorizo, frijoles, chicharron, chile cuaresmeno, jamon and mole. Combinations can be made for a peso more. And they have pozole and atole available as well. I would have liked to induge but that would have been lunacy.

I had the simple carne deshebrada or shredded beef. Ana had the frijoles. Both were just perfect. Little bites of meat (or beans) properly seasoned with the alternating crispy and soft texture of the bread. Fantastic.

But while it was a good experience, I have to recommend that one goes there on an empty stomach and prepares oneself for the complete tour. A menu such as this, with small pambazos, deserves further and deeper exploration. One of each should suffice, along with a bowl of pozole and a side of the delicious-looking strawberry atole (though I suspect the flavor of atole changes regularly). 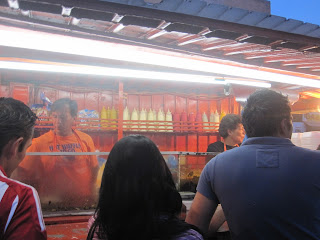 "Have you ever tried bandillos?", asked Ana.

Bandillos. Something that only proper bandits ate? Sounded interesting. But she wanted a definitive answer but I had no idea what bandillos were and she had taken me to try so many different things that maybe I had already tried them and didn't realize it. Afterall, I could be a proper Bandito...

In Colonia Escandon, at the southeast corner of Jose Marti and Patriotismo, is a small cluster of food stands. There you will find Hamburguesas Montaner and the famous bandillo. 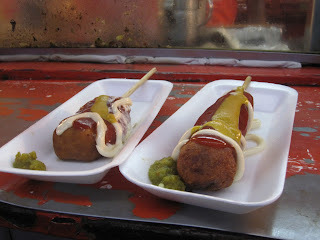 I had been in the city for a couple of days and was starting to feel a certain withdrawal from french fries. As much as I may love tacos, tacos al pastor and the assortment of wonderful Mexican fare, I can't help but to think how much powerful that pastor experience would be with a side of salted papas fritas.

Knowing me all too well, she asked me if I wanted to have some fries and then we were off to Montaner. 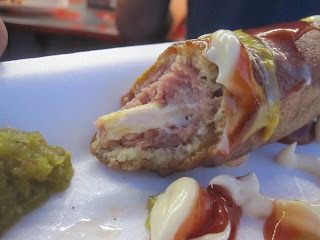 Getting inside the sausage.

Most of the food stalls in Mexico City are small, mom and pop affairs. There's pop grilling the burgers, mom frying everything else and maybe their son taking money. And it all happens in what must be an eight foot long by four foot deep metal stand.

The best thing about Mexico City is that it's populated by places like Montaner, selling just about everything Mexican you could ever dream of eating. And they're everywhere, which means that there are plenty of places that are just so-so and some that are stellar. They key is driving around a seeing which stands have the longest lines. 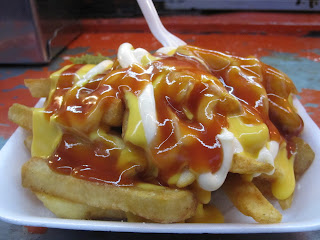 As received our order of fries and bandillos, I realized that I had never had these before in Mexico City and what was once unknown and mysterious, was suddenly familiar and comforting. Think "corn dogs" and you've pretty much got what a bandillo is all about. However, in this case, the batter isn't thick, it's thin and light, and makes for a nice treat when slathered with mayo, ketchup, mustard and a side of pureed jalapeno peppers.

Ana's favorite is the cheese version and I have to agree that I think it's better. Better mouthfeel and a nice chewiness that goes well with the batter. 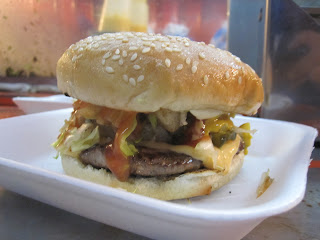 But since this is "Hamburguesas Montaner", I had to try a sample of their hamburger. Ana ordered the Hawaiian which is their burger with a slice ring of pineapple, lightly griddled. I'm guessing it's canned pineapple since most people don't cut rings that perfect by hand!

The burger was pretty decent. Simple, basic fare. Piled high with toppings and condiments, it's a messy burger but quite satisfying. 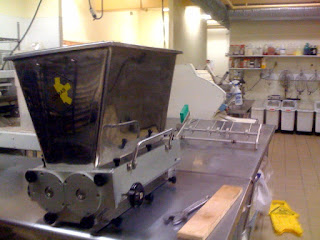 Sometimes my day takes a slightly turn for the strange.

After heading downtown to pick up some supplies, I decided at the last minute to swing by a local pasticceria for a scoop of gelato. Upon arriving and having a look at the gelato selection, which was looking a bit wet, I decided to just grab a cookie instead.

That's exactly when the chef/owner decided that I must come try the new cookie that's cooling on the racks in the kitchen. So, back into the kitchen we went. Now, I must say, the kitchen was pretty nice. Very clean, well organized - essentially the kind of place that I wouldn't mind working.

After showing me the new batch of butter cookies with powdered sugar topping and a hint of lemon, the chef decides to show me his (new?) pastry machine. This unit measures, portions and dispenses a variety of pastry items based on how you program it. Cookies, eclairs, sheets, anything and everything for the proper Italian pastry chef.

The thing is that the kitchen crew has gone home for the day and he's cleaning the unit. With the main hopper detached from the machine, he really needs someone to help him move the hopper and put it back in place. The hopper is stainless steel and probably weighs two hundred pounds.

Basically, for a few cookies and a tour of the kitchen, I've been drafted into moving this massive, heavy hopper. Not that I mind so much since we sit around talking shop and I get the opportunity to learn a bit about Italian pasty making from someone who's a true master of the craft. All in exchange for a little brute labor.

Posted by onocoffee at 6:49 PM No comments: Links to this post