The Trouble With V60s 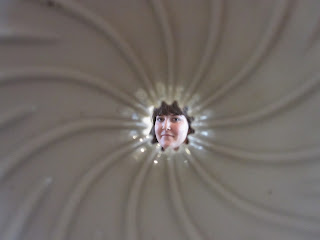 Rebecca through the lens of the V60.

This is something I've been pondering for several months now.

Spro Hampden opened on March 18, 2010 for Friends & Family. The next day, it opened for normal service and has been going non-stop ever since. Since the fall of 2009, we've been working with the Beehouse pourover drip brewer and sometime in April 2010, I bought a couple of Hario V60 pourovers for testing in our labs.

Somehow over the next month, those two V60s made their way into service on the brew bar. My merry band of baristas had been playing with them, liked them and started using them in service. I personally was skeptical.

For two months, the V60 remained quite popular amongst the Spro baristas, outpacing its use over the Beehouse. Why? Much of it seemed to center around the notion that the Beehouse was kinda slow.

By July, our baristas started to swing the other way. After nearly two full months of regular V60 service, the little Hario brewer started to fall out of favor and the Beehouse returned to more and more cups.

Within the rest of the "3W" Coffee World, the Hario V60 seems to reign supreme. From shop to shop, all across the nation, everyone and their coffee mother is clamoring to add a V60 brew bar to their shops, or even replace their other brew methods completely.

And I'm really thinking that just about everyone is purporting a sham.

No doubt about it, the V60 is wildly popular. And why shouldn't it be? It's relatively cheap to buy. Cheap to operate. Cheap to replace. Comes in a variety of style and colors. Has a cool design. But most importantly in a production environment: you can brew a cup of coffee in a minute and thirty seconds. Flat.

Add to the speed issue that by doing a V60 brew, you're able to give the customer the impression that you're doing something special, something unique, something cool just for them, when really you're actually just passing off a sham. A fast-brewed, underextracted and not so great cup of coffee that they think is better because it came with a better show.

Watch most of these V60 baristas and what are they doing? They're putting ground coffee into the V60 and then gunning it full of water and letting the stuff flow out. One point Five minutes later, you're coffee is ready. Add a little sugar and cream and most of the people really won't notice the difference.

Some of you are probably wondering: "what's with the 1.5 minute thing?" Well, it's mainly because most standard practices for drip brew coffee calls for an extraction time of 3-5 minutes. That gives the coffee enough interaction time with the water to pull out all of those essential oils and solids that make coffee into coffee. It's not something that you normally rush unless you're using some sort of pressurized extraction, like the vac pot, espresso machine or Aeropress.

Defenders of this practice are sure to whip out their meters and tell you that yes, their meter readings demonstrate that this 1.5 minute coffee registers at 19%, but what they're not telling you is that they've just used two to three times the average amount of coffee to achieve this. Reminds me of the kind of thinking that went along with that automated brewer a few years back where baristas were using 44grams of coffee per serving (when 24 grams would normally have sufficed).

Quite simply: Don't Believe The Hype.

I battled with the V60 myself. Early on, in our lab tests, I noticed that the V60 was fast. Extremely fast. Those vortex channels, paired with that large, gaping hole meant that the V60 was all about the Path Of Least Resistance and that liquid would flow through at a high rate. Pour water into an empty V60 and it's gone. Pour water into an empty Beehouse and it takes a bit of time for the liquid to pass through the three small holes in the brewer.

It is those reduced orifice holes that restrict the flow of water causing pooling in the brewer that aid in infusing the coffee. It is an absolute essential part of brewing and one that you, as the barista, must ensure to create. This means that you either use a more restricted flow brewer (like the Beehouse and subequently, the BonMac) or that you control the flow of water carefully with the V60.

Running and Gunning the V60 makes sense for a variety of reasons:

However, what Running and Gunning doesn't do is: ensure a quality cup that is superior to other brewing methods, or at the very least, equivalent in quality to a properly calibrated and set Fetco Extractor Brewer.

Sadly, most of the V60 coffee served in America is of lower quality than that of a properly set up Fetco.

And they're charging more.

Recently, a world famous barista was listening to me casually mention that I push my baristas to time out their V60 brews with a target of 3:30 to 4:00 total brew time. The reaction he gave me indicated that he disagreed and that my approach was probably overkill. Of course, I disagree with his disagreement, but I wasn't interested in discussing brewing standards so I left it alone.

Of course, I could be wrong. I doubt it. But I could be wrong. Next time you're out there buying a cup of V60 brewed coffee, watch how they brew and see if they're doing the Run & Gun approach to your coffee. It probably isn't as good as it could be.
Posted by onocoffee at 8:33 AM 12 comments: Links to this post