Visitors from Afar and Anear 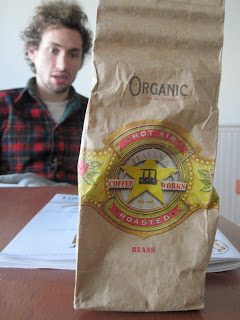 In his other life, Jeremy is the drummer for Baltimore's Ponytail - a band described by the rock media as either being on the cutting edge of avant garde music today or something not suitable for pregnant women. Over the holiday season, Jeremy and Ponytail toured Australia and New Zealand where he picked up a bag of Cuban coffee (the bean not the drink) from Wellington's Havana Coffee Works.

Whether it's Cuban cigars, Cuban rum or Cuban coffee - as long as it's contraband and considered illegal for consumption in the United States, we're game to try it. The coffee itself wasn't bad but we couldn't tell how old the coffee was or how it should taste because all the bag had on it was a "Use by February 17, 2010" stamp. Oh well, it wasn't bad. 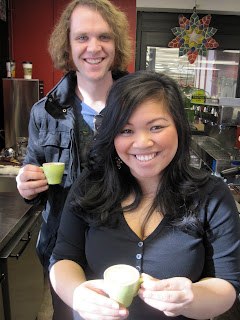 Isaiah visits Lamarie at The Spro in Towson.

Also on today's docket was a surprise visit by Isaiah Sheese from Tulsa, Oklahoma's Doubleshot Coffee. A few years ago, Doubleshot owner Brian Franklin made national news when he beat coffee behemoth Starbucks lawsuit over the name of his company (as though the public would confuse his company with their bottled coffee beverage). But recently (like this week), Doubleshot rocked to notoriety once again with the blog posting over their recent experience at the South Central Regional Barista Competition and telling my former portafilter.net podcast co-host to piss off.

Isaiah was in town accompanying his girlfriend as she toured the medical centers of the Mid-Atlantic and came to pay a visit to see how we do things in Charm City. It's always a pleasure to have coffee industry friends visit our little hamlet as we showed him project hampden, The Spro of Towson and a little lunch across the street at Puffs & Pastries.
Posted by onocoffee at 10:30 PM No comments: Links to this post