Looking down upon the sea of lights below as we approached the city, I'm reminded of my time living in Manila. That mix of yellow-orange sodium vapor mixed with the dim whitish blue of fluorescent lights creating a strangely comforting blanket amidst the darkness.

We're arriving in Managua two hours late after weather delayed the plane in Tampa and mechanical problems kept us on the ground in Miami. Had we not endured these delays, the actual flight time from Baltimore to Managua is shorter than flying from Baltimore to Los Angeles.

On this trip, I'm lucky to have the first seat on the aircraft: 3B meaning that I'm the first off the plane. As soon as I pass through the open bulkhead I'm hit with that steamy mix of heat, humidity and the slight acrid aroma of burning garbage slash burning rice husks. It's an aroma I'm well familiar and one that, oddly enough, feels like home.

Managua's Sandino International Airport is reputed to be the most modern terminal in Central America and while it is a smart-looking building and interior, the immigration arrival hall is missing one thing: air conditioning. This means one thing: sweat. Not a profusion of sweat but rather that constant trickle of sweat that comes while living in tropical climates.

In line I meet two girls arriving on the Continental flight from Houston. They've also been delayed by two hours due to weather. One is here for the surf, which is evidently quite good here on the Pacific coast. The other is a girl from South Dakota who is here as an expat working with the school systems. But it's hot and I'm still sweating.

The only thing to do in times like this is hope that your body corrects itself quickly and adjusts to the temperature and humidity. Actually, the temperature is fine, about 85F. It's the humidity that kills and I'm starting to look like I'm taking a bath.

Your tourist card costs five dollars, so make sure you've got cash. Luckily, I still had some pocket money ($2K) so paying was no problemo (I'm kidding about the $2K). It's been a secret desire of mine to fill my passport to the point that no page was left unstamped. I was hoping that this would be the passport that would take me there but with my passport expiring in a year (and the fact that most countries require a passport to be valid for at least six months from the date of entry), I won't achieve my goal. In twenty years, I haven't been able to do it. Of course, it would help if I didn't try jamming it all into the past two years.

While I might fail in my mission to fill my passport, I have given it the Old College Try, which leads to my personal amusement as the immigration officer leafs through page after page after page looking for an empty spot to stamp. As she stamps an open spot in my passport, a warm feeling comes over me as each stamp represents a small victory in my pursuit of World Domination.

At 11:00pm, the streets of Managua are all but deserted. Like a Third World country, the streets are relatively dark. Maybe it's just my First World prejudice but streets always seem darker and lights always seem dimmer in the Third World. As we drive, I notice a few small eateries still open. Some are just drinking holes. All have those molded plastic chairs outside reminding me of many a night in SouthEast Asia drinking San Miguel Beer chilled with hand hacked chunks of hay-speckled ice.

Evidently, in Managua stopping at a red light is optional. Roberto doesn't stop at a light unless a car happens to be crossing the intersection. In fact, at the red lights he casually cruises us through them. It's the green lights where he exercises caution, fully expecting the driver with the red to ignore it and plow into us.

Managua is kinda odd for a capitol city. There are no high-rises in sight. There's no real central district. Everything is spread out. From what I've been reading, the earthquake of 1972 wiped just about everything out and rebuilding has been unconventional, to say the least.

Soon, we arrive at the Hilton Princesa. Check in is quick and painless. The staff is warm, friendly and the bell guy offers to send a massage therapist to my room for thirty dollars for one hour. Thirty bucks for a massage? Sounds good, tell her to come in twenty minutes.

After nine hours of traveling, a massage seems like a good idea. The massage itself is decent enough but the masseuse uses a crap load of lotion and soon I'm fully coated in floral smelling lotion. Close your eyes, take a sniff and I could pass for a florist. It's as though a flower warehouse exploded on my body.

Massage is over, I smell like a funeral and it's only been thirty minutes. Now the masseuse tells me the price is fifty dollars. Huh? Hell no, the bell guy told me thirty. No, it's fifty. No, it's thirty. Fifty. Fine, let's go down and talk to this guy.

Down at the lobby, we get things sorted out. Turns out the massages are sidelines with thirty for the masseuse, ten for the bell and ten for the house (I'm guessing the front desk). Honestly, I don't have a problem with people getting their cut but with a price rivaling that at home, it isn't a deal - and it isn't a deal I would have gone for for fifty bucks.

Perhaps I should clarify something for long time readers of this blog who may be expecting me to stumble into some sort of seediness: this massage did not include any sort of "extras" or "happy endings." It was strictly legit.

After a quick discussion, I was assured that things would be handled and I would not be further inconvenienced. Good answer, I just wonder if I'll face any additional problems that may arise because of this. Gotta remember to lock things up extra tight.

After a hot shower with a lot of scrubbing to remove the thick coat of lotion, I climbed into the king-sized bed for a deep sleep filled with dreams of things to come. 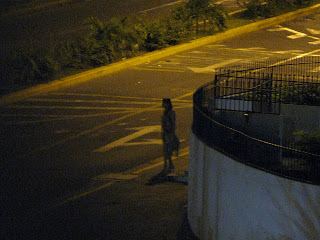 Late Night Carretera Masaya - All things are for sale in Managua.
Posted by onocoffee at 11:57 PM No comments: Links to this post

For my trip to Nicaragua, I've been forced to switch from my beloved United and Star Alliance airlines to American and OneWorld. It's been over four years since I've flown with American and they've got the best routing: Baltimore - Miami - Managua, all for less than four hundred bucks. Fly the same routing on United and it costs nearly two thousand - and the Miami to Managua segment on TACA doesn't accrue mileage. Forget it.

Instead, I've managed to get myself an upgrade to First Class which means that I get to fly on American with roughly the same privilege that my Premiere Executive level gets me on United. I won't lie: once you've experienced some level of comfort, it's hard to go back to steerage. And on international flights, my first class ticket gets me admission into the Admiral's Club Lounge.

First Class service from BWI - MIA was perfunctory (I'm wondering if perfunctory service is mandatory within the United States). Some hot nuts, some beverages and that's about it. The seats are a more comfortable than United's domestic first with adjustable headrests, higher fold out tables (a considerable advantage when you have a tummy), and on-board DC power.

Miami is an American gateway to Latin America. Many of American's flights south depart the United States from here. American was the first airline to offer a frequent flier program and the first to offer a passenger lounge. The Admiral's Club Lounge is nicely appointed, nicely decorated and comfortable. The bar food offers a Latin twist with ham filled croquettes and potato balls. As far as domestic airline lounges go, it's pretty good and on par with United's Red Carpet Club at Dulles and ORD (Chicago).

USAirway's flagship club in Charlotte offers free candies and an assortment of chips. But, in American's defense, the Admiral's Club offers a children's play area with free sugar cookies - the hidden gem in the club that goes nicely with hot tea.

Our departure time to Managua is 6:45pm. Then it becomes 7:45pm Then 8:08pm. Flight delays are the worst, but at least the pain is lessened by the comfort of the Admiral's Club and my slow pickling with Bombay Tonics.

Once we board the plane there's still problems. This time, it's mechanical. It takes the ground crew another half an hour to solve this problem. Again, I'm in seat 3B which allows me to monitor their progress closely.

Finally, we push back from the gate. Then it's another twenty minutes waiting for a spot in airspace to take off again. By the time our wheels leave the ground we're two hours late. But at least we're on our way to Managua...
Posted by onocoffee at 6:59 PM No comments: Links to this post